The Stations of the Cross are being hung on the wall as sound speakers are being wired in. The pews are getting bolted down as the paint is getting touched up.

There are no idle hands inside Mission San Gabriel Arcángel leading up to the “Forward in Mission” Jubilee Year’s closing Mass. The jubilee, which started last September, commemorates the 250th anniversary of the mission’s founding by St. Junípero Serra, the first Catholic outpost in what would eventually become the Archdiocese of Los Angeles.

But the Mass will also represent another, perhaps equally important milestone: the first liturgy celebrated inside the historic church since barely surviving a devastating arson fire in July 2020. In other words, a true revival.

“This was a death of a community,” said Father John Molyneux, pastor of Mission San Gabriel. “This Mass says we’ve come back and we’ve come back strong. We are a resurrection people.”

It’s taken $6.7 million and more than two years of research and labor to get to this moment. For those involved, it was more than just a job.

“Everyone on the team is so invested … and has put their heartfelt emotion into it,” said Terri Huerta, director of Mission Development and Communications. “We really brought back the humility of what is Mission San Gabriel and its beginnings. … I hope the public can see it, feel it.” 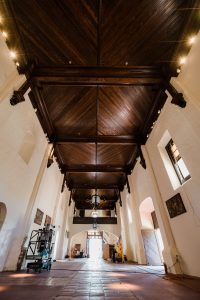 The mission's restoration team was so impressed by the color of the redwood beams in the mission's new ceiling that they decided not to paint over the wood. (Simon Kim/Archdiocese of LA)

Longtime parishioner and docent Mary Cammarano said she can’t wait to give tours again and share the history of the mission. She hopes to attend the closing Mass even though she’s recovering from knee surgery.

“My heart is already there,” said Cammarano. “I’m anxious to see it. I’m looking forward to recapturing what we had.”

Damage from the four-alarm fire was extensive; it ravaged the 230 year old roof, the ceiling, and the walls. The intense heat twisted steel beams designed to withstand earthquakes, while smoke and soot marred statues and furniture in the church and artifacts in the museum. The firefight itself caused flooding and subsequent damage to the baptistry and sacristy floors. Since the blaze took place in the early morning hours, no one was hurt.

Now, the renovation that started with the ceiling and worked its way down to the tiles, is nearly complete. The team leading the project, which includes Huerta, Father Molyneux, structural engineer Mel Green and archdiocesan construction consultant Jill Short, said the overall design was guided by major eras in the mission’s history and its primary purpose of inspiring faith and worship.

In Father Molyneux’s view, the most significant — and beautiful — aspect of the renovation was the new ceiling made of redwood beams left in their natural color. Other surfaces in the mission were painted with carefully chosen colors. Short explained that after the fire, bits of previous paint were exposed, so they sent samples to a lab for analysis. This gave the team insight on how to choose a historically accurate color scheme like white on the walls and sepia on the window sashes. 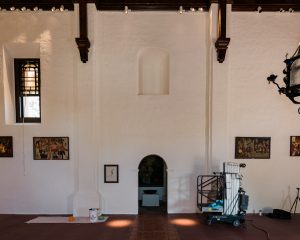 One of the niches discovered in the mission's walls after the devastating July 2020 arson fire. (Simon Kim/Archdiocese of LA)

Old paint was not the only thing revealed during the fire cleanup. When blackened plaster was removed from the walls, crews were surprised to find several niches inside – and they weren’t empty.

“It was super exciting to say, ‘Hey, what is that,’ and open it up,” recalled Huerta. “The bottom layer [of a niche] was filled with larger rocks and stones similar to those used to build the foundation and the walls.”

Adobe bricks uncovered in a niche were used to repair the pedestal that sits in the mission’s baptistery. Also found on the walls were traces of painted wood paneling from the early 1900s. Those are now framed for public viewing accompanied by archival photos to give visitors a visual sense of the mission’s aesthetic history. Glass beads and brownware pieces unearthed in the sacristy will eventually be on display as well.

Some of the mission’s most historical pieces — the pulpit, the altar, and the reredos (the decorative piece behind the altar) are still a work in progress. While they’ve undergone some cleaning and patching, the more intensive work can only be done in a dust-free environment. It will have to wait until all other projects are completed first.

Prior to the fire and in preparation for the jubilee, the mission was undergoing a more modest renovation. That meant many paintings and religious artifacts were safe in storage when the arsonist struck. However, three statues of saints, including the mission’s namesake, were still inside. They sustained smoke and heat damage but have now been cleaned by art preservationists. Also left behind was the well-known Our Lady of Sorrows painting. Two months into the fire cleanup she was discovered, on her feast day no less, with burn holes and blistering.

“She’s fully restored,” said Huerta with a smile. “She looks more beautiful now than she did before the fire.” 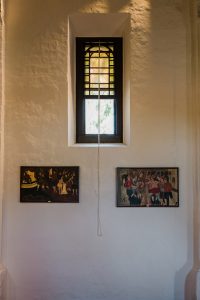 One of the mission's newly installed windows. (Simon Kim/Archdiocese of LA)

So far, the mission has raised $400,000 in donations to its restoration fund. That money has covered upgrades that insurance would not. They include better lighting, hearing aids for visitors, and an enhanced security system; high priority after the arson.

The blaze came during a wave of vandalism targeting missions founded by St. Junípero Serra. Statues of the Spanish missionary were defaced amid debate about the historical mistreatment of Native people. Mission San Gabriel employees tucked away their statue where it remains until its new garden location is chosen. Descendents of the Gabrielino-Tongva Tribe are also designing a garden honoring their legacy in the history of the mission.

Charges against the suspect in the arson attack, John David Corey Jr. of San Gabriel, were recently dropped because a key witness could not attend a hearing. Prosecutors have refiled the case and preliminary hearings to determine if Corey will be charged are currently underway.

The jubilee’s closing “Mass of Thanksgiving” takes place inside Mission San Gabriel Arcángel at 10 a.m. on Saturday, Sept. 10. Because of the mission church’s small size, the Mass will be displayed via livestream inside the Chapel of the Annunciation next door, and on LACatholics.org. The mission’s normal Mass schedule is expected to resume around Christmas, once the restoration’s final touches are made.

The fact that this is the first Mass for the mission and the last Mass of the jubilee, whose festivities were delayed a year because of the COVID-19 pandemic, is not lost on Short.

“God’s timing is always perfect,” asserted Short. “We might not always understand it, but he reveals his truth in time. I think this is another beautiful example of that.”