Two years ago, Mission San Gabriel Arcángel was hit with what pastor Father John Molyneux, CMF, calls “a double punch”: First, the onset of the COVID-19 pandemic in early 2020 that kept faithful away from the sacraments — and one another — for months; then, a mysterious fire that gutted the mission church, Christianity’s oldest outpost in what is now the Archdiocese of Los Angeles.

But on Sept. 10, providence answered back with a double punch of its own: an animated conclusion to a special jubilee year celebrating the mission’s 250 years, and a reopening (of sorts) of the restored church, a gleaming tribute to the mission’s rich artistic legacy with an assist from state-of-the-art technology.

“I never thought it would look that good,” said Father Molyneux after the “Forward in Mission” Jubilee Year closing Mass celebrated by Los Angeles Archbishop José H. Gomez. “It was a big relief.”

Parishioners celebrated the end of one chapter and the start of a new one on a muggy Saturday morning in San Gabriel, at the tail end of a rare September rainstorm hitting Southern California.

Before the Mass, Archbishop Gomez led a brief prayer ceremony outside the Chapel of the Annunciation next to the mission church. Natives burned sage and sang songs of healing of remembrance, honoring their ancestors who built the mission and are buried on its grounds. Among them was Anthony Morales, tribal chief of the Gabrieleño San Gabriel Band of Mission Indians. 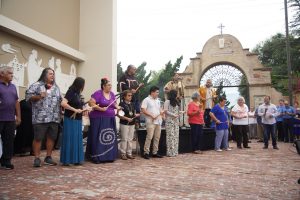 Before the closing of the jubilee Holy Door, members of the Gabrieleño San Gabriel Band of Mission Indians honored their ancestors who built the mission and are buried on its grounds with songs of healing and remembrance. (Isabel Cacho)

“History is something I cannot change, something none of us can change,” said Morales.

A parishioner of San Gabriel, Morales was among those who could recall the grief of another Saturday morning: July 11, 2020, when firefighters responded to that fateful four-alarm fire. He called the closing of the jubilee year a “historical moment” for his people, whose ancestors built the mission.

After Archbishop Gomez closed the chapel’s jubilee Holy Door, priests, religious sisters, San Gabriel parishioners, and visitors from around the archdiocese followed him into the restored church for Mass. An overflow crowd followed the trilingual liturgy (English, Spanish, and Vietnamese) via livestream in the Chapel of the Annunciation.

During and after the Mass, guests had a chance to take in the details of the restoration: the rebuilt and repainted baptistery, the newly discovered niches in the walls, the glimmering redwood planks of the new ceiling.

Although services won’t resume until the final touches are done in a few more months, parishioners said seeing the restoration for the first time gave them hope. 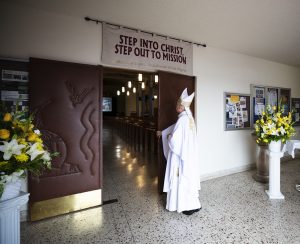 Archbishop Gomez closed the jubilee year Holy Door at the Chapel of the Annunciation, the larger, newer church on the mission grounds. (Victor Alemán)

“We’ve been suffering,” said Ed Martinez, a parishioner at the mission since 1977.  “Now we can get back to home.”

For Susie Escamilla, another longtime member of the parish, the Mass “almost felt like a rebirth of our old mission coming back to life again” after the devastation of the fire.

“I think they’ve done a good job in keeping to the church’s original character,” she said of the project.

As the parish continues to recover from the effects of the pandemic, Escamilla said she was “hopeful that people will want to come back to our community here at San Gabriel Mission. Not only to enjoy the Masses at the old mission, but to be present within the mission community again.” 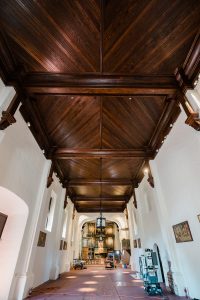 The mission's restoration team was so impressed by the color of the redwood beams in the mission's new ceiling that they decided not to paint over the wood. (Simon Kim)

When asked about any miracles they’d witnessed in the restoration process, several parishioners recalled the discovery of a treasured painting of Our Lady of Sorrows, found two months after the fire on her feast day (Sept. 15) in the rubble of the mission.

Others, like Escamilla, saw God’s protection at work in how the mission structure itself was somehow spared during the firefight that morning, allowing for the church to be restored, rather than totally rebuilt.

“Seeing how intense the fire was, it was just surprising,” said Escamilla.

Concelebrating the closing Mass were Auxiliary Bishops David O'Connell and Marc Trudeau, as well as more than a dozen priests. (Victor Alemán)

But for Father Molyneux, who arrived in San Gabriel in 2018, the biggest miracle was how so many people came together so quickly to rebuild the mission in time for the close of the jubilee year.

“I’m kind of new to this mission, to California,” said the Claretian priest. “I didn’t understand before what this mission meant to people.”

In his homily, Archbishop Gomez recalled that the mission was “where the faith began in Southern California,” and that all these years later, “we walk now in the company of a great cloud of witnesses. Angels and saints, our ancestors and loved ones, in heaven and on earth.”

“Today,” he continued, “we especially ask St. Junípero Serra, and we ask the first peoples who built this mission to pray for us, to give us the strength to continue the work they started.”