Authorities announced charges against a suspected arsonist whom investigators believe ignited the overnight fire that gutted much of Mission San Gabriel last July.

Fifty-seven-year-old John David Corey Jr. was arrested last year for another, “unrelated” arson attack in the San Gabriel Valley that took place days after the July 11, 2020 fire at the mission.

Corey was charged Tuesday morning with two felony counts of arson of an inhabited structure and one count each of arson during a state of emergency, possession of flammable material, and first-degree residential burglary. He faces up to 14 years in state prison if convicted. 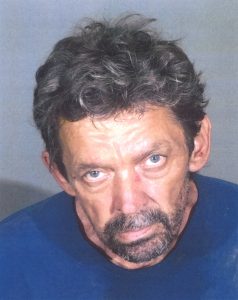 Officials announced the break in the case at a press conference Tuesday outside the mission, where restoration work is underway ahead of jubilee celebrations marking its 250th anniversary set to start in September. The announcement caps a nearly 10-month investigation by the Verdugo Fire Investigation Task Force that also involved federal FBI and ATF investigators.

Officials declined to comment on the specifics of the case against Corey, such as whether he acted alone or how he managed to set the church on fire. They directed all questions to the LA District Attorney’s Office, which had not responded to media inquiries as of Tuesday afternoon.

Throughout the investigation, authorities avoided commenting on the cause of the fire. The blaze destroyed the mission church’s roof and damaged its walls and pews, while the 150,000 gallons of water used to put out the fire caused the sacristy and baptistry floors to sink, revealing previously unknown layers of brick and stone first used to build the mission.

Because the church had been undergoing renovations, much of the artwork in the sanctuary, including historic paintings and other devotional artifacts, had been removed prior to the fire.

Church officials hope to have the mission’s new roof installed by the end of the summer in time for the start of the jubilee in September.

According to San Gabriel City Councilwoman Denise Menchaca, investigators took their time in announcing Corey’s arrest due to the overwhelming amount of “theories” and “noise” surrounding the fire.

Menchaca, a parishioner at the mission, noted the fire broke out amid a wave of anti-racism demonstrations and protests that included attacks on public monuments and statues to controversial figures in U.S. history, including statues of St. Junípero Serra, the founder of Mission San Gabriel.

“There were just so many theories out there, but at the end of the day this was our parish,” said Menchaca, who was mayor at the time of the fire last year. “Whatever the noise was, this was a very painful experience.”

The inside of the San Gabriel Mission church after an early morning fire destroyed the 249-year-old church's roof Saturday, July 11, 2021. (John McCoy/Angelus News)

Still, the arson attack represented what Menchaca calls an attack on “the epicenter of the San Gabriel Valley.”

“You don't have to be a Catholic — everybody knows the mission and its historical value,” said Menchaca. “It’s the oldest structure in Los Angeles County.”

At the press conference, San Gabriel Mission pastor Father John Molyneux thanked fire and police officials and pledged “our continued cooperation with the District Attorney’s office as we seek justice tempered with mercy.”

“Our community of faith at the mission is close-knit and has been rocked by this incident,” said Father Molyneux. “For many lifelong parishioners, this fire has been a little death. But we are resurrection people, and look ahead to the future with a renewed sense of hope and purpose.”

Despite the fire, Menchaca hopes that the mission’s 250th birthday and declining COVID-19 numbers allow her parish — and her city — to cherish the “treasure” that is Mission San Gabriel like never before.

“It’s still kind of hard to believe, when you see it,” said Menchaca. “I’m hoping once COVID comes to an end and everything’s lifted, that there will be more people galvanizing together. I’m hoping the jubilee will be that moment when we can just hug each other.”