All eyes were on Archbishop José H. Gomez, Saturday, Sept. 11, as he approached the imposing bronze doors that form the main entrance to the Cathedral of Our Lady of the Angels. The eyes that followed him belonged to local faithful of all stripes, from consecrated and lay religious members in their habits, caps, and capes to families with young children braving the summer heat, brimming with anticipation.

“Open the gates of justice,” he proclaimed, quoting Psalm 118. “We shall enter and give thanks to the Lord.”

Slowly, very slowly, the doors began to part, so heavy that they require a hydraulic motor to move them. Just as slowly, those gathered passed through the doors to be greeted inside by choir music and, eventually, a Mass to celebrate the beginning of the Archdiocese of Los Angeles’ “Forward In Mission” Jubilee Year. 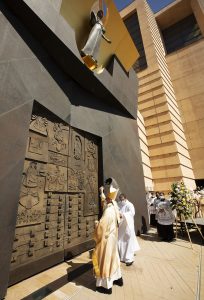 Archbishop Gomez blesses the Holy Doors of the Cathedral of Our Lady of the Angels to mark the beginning of the Jubilee Year. (Victor Alemán)

Archbishop Gomez called the yearlong jubilee, marking the 250th anniversary of the founding of Mission San Gabriel Arcángel, an “invitation to make a new start.”

To that end, 22 “Pilgrimage Sites” have been set up at churches around the archdiocese, offering the faithful an opportunity for prayer and spiritual renewal “with the intention of uniting themselves with the missionary spirit of Our Lady of Guadalupe, Star of the New Evangelization, and St. Junípero Serra, founder of Mission San Gabriel Arcángel.”

A “new start” seems especially apt coming 1 1/2 years after the dawn of a global pandemic that saw churches close their doors and then cautiously reopen them to a city in need of all kinds of healing.

“It’s been a time when we’ve been put through the ringer,” said Father Parker Sandoval, vice chancellor for the archdiocese. “It’s been a miserable year on so many fronts, and yet, there’s hope. There are blessings in the face of these challenges, a light at the end of the tunnel: God still loves us.” 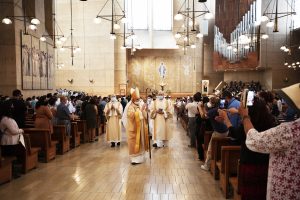 Archbishop Jose H. Gomez at the end of the opening Mass of the Mission San Gabriel jubilee year Saturday, Sept. 11 at the Cathedral of Our Lady of the Angels. (Victor Alemán)

For Irma Piza of Los Angeles, Saturday marked the first large church event she had attended in more than a year because of the pandemic.

“I feel so grateful, so blessed to be here,” she said. “This was very important to me, I wanted to be here to be more united with Our Lady, to celebrate with our community and to celebrate our history.”

Given that the jubilee celebrates the founding of the city’s first Catholic outpost, history was very much on everyone’s mind. During his homily, Archbishop Gomez reminded those present that this was not a moment of mere happenstance, but that history has “a direction and a purpose.”

Just a few days earlier on Wednesday, Sept. 8, he presided a special prayer service at the mission celebrating its official 250-year anniversary, accompanied by more than 40 priests and the auxiliary bishops of the Archdiocese of Los Angeles, as well as civic leaders and representatives of the first peoples of the land.

“Five years before the Declaration of Independence!” he marveled to the estimated 800 people in attendance. They had arrived early, a long line waiting to be seated more than an hour before the service was scheduled to start, sending organizers scrambling to find more folding chairs.

The service was held outdoors in the shadow of the mission church that was nearly destroyed last year in an arson fire. Mission officials expect the church to be fully repaired and renovated by next spring, midway through the jubilee year. 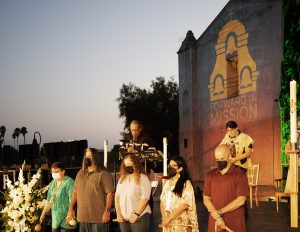 Ironically, the church could not have handled such a large gathering, its capacity being about 200. So it seemed fitting that the combination of circumstances had helped to require that the service take place outside, amid the din of traffic and birds and curious passersby, all of whom, in some way, were there because of what happened 250 years ago.

In his opening remarks, Archbishop Gomez called the mission “our rock,” conscious that the history of the archdiocese, and of the city of Los Angeles itself, flows from that rock.

Ten years after the mission’s founding, 44 settlers known as “Los Pobladores” walked to what is now downtown Los Angeles to establish El Pueblo de Nuestra la Reina de los Ángeles, or “The Town of Our Lady the Queen of the Angels.”

It was from those humble beginnings that the Church in Los Angeles grew into the country’s largest Catholic diocese, today home to 288 parishes.

“The mission is so important to the region, we’re very proud of it,” said San Gabriel Mayor Chin Ho Liao, who has served as a docent at the mission. Liao has taken part in the annual walks from the mission to El Pueblo. The walks have attracted as many as 1,000 participants in past years and take about 2 1/2 hours to complete, though Liao likes to recall the year that a group of bikers made the trip: “They did it in half an hour.”

Wednesday’s service began with members of the Gabrielino San Gabriel Band of Mission Indians, offering blessings and songs in remembrance of their ancestors who built the mission.

More than 6,000 are buried there, making it “a sacred place to us,” said Chief Anthony Morales.

The mission’s beginnings, particularly with respect to how Morales’ ancestors were sometimes treated, “were not perfect — no human endeavor can be,” Archbishop Gomez said in his opening remarks.

He acknowledged that the mission that was founded by Franciscan brothers, led by St. Junípero, would never have survived without the indigenous peoples “working together right here, building a multicultural community based on worship, agriculture, and the arts.”

Still, “there were failures of judgment and cultural misunderstandings that caused much suffering and pain.”

When the service had concluded, the guests were invited to take a peek inside the mission’s front entrance and check out the progress of its renovation. What they saw was an interior completely gutted back to the original walls. More than a few people marveled that the church was even standing, having literally gone through the fire. The scheduled completion of the renovation next spring is another special moment the San Gabriel community now has to look forward to — and a fitting metaphor for a season of renewal. 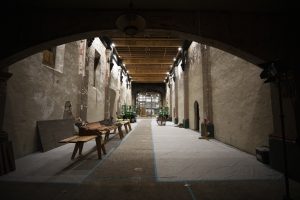 Father Sandoval, who helped organize Wednesday’s service, said it provided an opportunity to “look back and give thanks for the missionaries and natives who built the foundation for this church.”

Saturday, on the other hand, was a “pivot to look forward to as we officially open the jubilee year.”

“One is commemoration, one is renewal,” he added.

Upon completion of the cathedral’s doors, which took five years, Father Richard S. Vosko, the project’s liturgical and art consultant, told the Los Angeles Times at the time that they provided “a portal to a sacred space … [it] says to the pilgrim that anything is possible on the other side of the door.”

Alternative, clearly marked Holy Doors can now be found at all of the 22 pilgrimage sites across the archdiocese. It is important for pilgrims to enter the site through those doors, which will be clearly marked at every church. If possible, it is suggested that pilgrims also walk a bit to whatever site is chosen as an opportunity to pray and “grow in missionary zeal,” in the words of Father Sandoval. 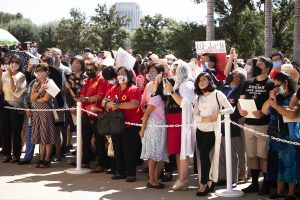 Visitors gathered before the official opening of the cathedral's Holy Doors to kick off the Mission San Gabriel jubilee year. (Victor Alemán)

Once a pilgrim has prayed — they are asked to at minimum say a Hail Mary, Our Father, and Glory Be — it is important to walk back through the Holy Doors and understand, Father Sandoval said, that now “we step into missionary territory and our mission begins in earnest.”

“Earnest” is putting it mildly how Maria Garcia of Glendora was feeling after Saturday’s Mass with an estimated 2,000 fellow worshippers at the cathedral. A single mother of seven, she said she plans on visiting a pilgrimage site soon.

“It offers a new opportunity to be better, to work on our commitment to be holy,” she said. “It’s not enough to be good, we’re called to be holy, to work toward holiness. As a Catholic, something like this gives me so much confidence, so much strength.

“That’s so important to a single mom, it’s something you need to hear,” she continued. “As a parent, there’s so much you face, so many hard stages of life with your kids. When you get through it, you feel as though it’s not you who did it, but God in you who did it. The jubilee reminds me, why would I be afraid of anything? It tells me, keep on going, child. That’s where I, where all of us, get our strength.”