Nine months after a mysterious fire ripped through Mission San Gabriel Arcángel, the historic church is still a mess.

The fire-blackened sanctuary walls hide behind layers of scaffolding. Pieces of peeling plaster remain. A temporary timber roof protects the 200-year-old interior from the elements, while a pair of scissor lifts shuffle around over the makeshift particle-board floors. Outside, contractors mill around the parish parking lot while the structure’s warped steel beams wait to be hauled away after being carefully unlodged over the course of weeks.

When the four-alarm fire struck in the predawn hours of July 11, 2020, destroying the mission’s roof and damaging most of its interior, mission officials and the local community were devastated.

But now, as the mission prepares for its 250th anniversary, silver linings from the fire perhaps more valuable than the millions of dollars in damage it caused are starting to emerge. 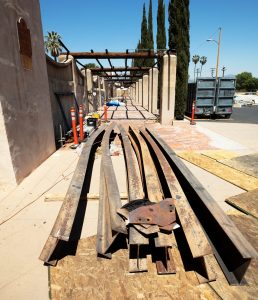 The mission church’s steel beams were warped by the intense fire. They had to be carefully removed and replaced by new ones last month. (Victor Alemán)

Behind those peeling layers of plaster, for example, workers have discovered painted walls with colorful designs that historians never knew existed. Beneath the sunken floors of the mission’s sacristy and tiny baptistery — crushed by the 150,000 gallons of water firefighters used to extinguish the blaze and save the mission from total destruction — previously unknown layers of old brick and slabs of stone mined from the San Gabriel Mountains have been unearthed.

Discoveries like these are handy tools to help historians understand the mission’s spotty past.

For Terri Huerta, the mission’s historical director, the hidden blessings of last summer’s fire are becoming clearer every day.

“Mission San Gabriel has kind of been a sleeping giant,” she explained during a recent visit to San Gabriel. “It’s been here, but no one’s really had the opportunity, like we do now, to tell its story.”

In other words, the fire may turn out to be just the providential sign that LA’s oldest Catholic outpost needed to reconnect with its historical and missionary identity — and right in time to kickoff a “jubilee year” that Archbishop José H. Gomez is planning to mark its 250th birthday. 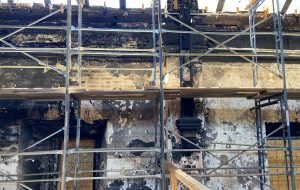 Telling the mission’s story has always been a challenge. The founding Spanish Franciscan missionaries were meticulous record-keepers — keeping track of everything from baptisms and weddings to crop yields — but after they were expelled in the 1830s, the newly privatized mission largely fell into decay under Mexican rule. Although it became a popular visitor attraction in the second half of the 1800s, its subsequent inhabitants did not always do a great job of keeping records.

As Huerta admitted, the mission “has never really had a verifiable narrative.”

Few in this close-knit mission parish have taken the tragic fire more personally than Huerta. Since the ’70s, Huerta’s family has celebrated baptisms, weddings, confirmations, and anniversaries here. Her brother is buried in the cemetery on the mission grounds.

But now she is a first-person witness to how last summer’s fire is providing key insights into mysteries like what the church’s interior design first looked like, or how its design evolved over the centuries.

“We have learned so much about this building from the fire,” said Huerta.

While researchers have long thought the structure was built with adobe bricks, the blaze has revealed that the natives and missionaries who worked together to build the mission actually used fired brick and mortar. 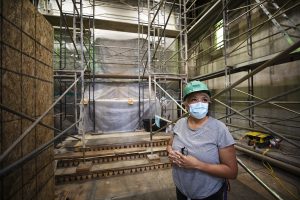 Six wooden statues and a painting with a miraculous reputation damaged by the fire are in the process of professional restoration. The church’s original reredos and altar, which firefighters were able to save during the early morning firefight, also need to be cleaned and repainted.

UC Riverside historian Steven Hackell is the chairperson of the mission’s Museum Committee. By forcing the removal of all of its surviving artifacts from the mission, the fire means his team can now develop a full inventory of those items, which include paintings, sculptures, books, and even liturgical vestments — and decide how and where to best preserve them.

Like Huerta, he sees the work ahead as a special opportunity.

“If you went through your attic and cleaned it up one day, you wouldn’t just put everything back where it was once the floors are dusted and the windows are clean,” Hackell explained. “You’d make decisions.”

Huerta hopes that some of those decisions will be formed by an advisory panel with art experts from the Los Angeles County Museum of Art (LACMA) and the Getty Museum to guide the repainting of the church’s interior.

“I think it’s a great opportunity for us to be a little more methodical about deciding what the mission is going to look like after we’re done, and what educational opportunities we have to share with the public,” said Huerta. 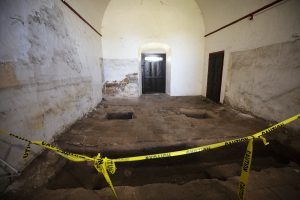 The thousands of gallons of water used to put out the fire last July caused the floor of the mission’s sacristy to sink, revealing layers of stone and brick used to first build the church. No human remains have been found in excavations since the fire. (Victor Alemán)

Both Huerta and Hackell see the events of the last year as a much-needed jumpstart to the task of restoring the mission for future generations to behold.

“We have this really unparalleled opportunity to not just restore the mission itself, but to more fully understand the material culture of the mission, which was so crucial,” said Hackell.

Meanwhile, the mission is working on submitting remodeling plans to the City of San Gabriel, which include modern electrical and HVAC systems.

The timeline for the restoration is still unfolding. Mission officials hope to have the new roof and ceiling fully installed by the time Archbishop Gomez celebrates the inaugural Mass for the jubilee year, slated for Sept. 11 (location still to be determined), and expect the mission to be “fully functional” by the end of the jubilee a year later.

A new generation of missionaries?

For Father Parker Sandoval, the San Gabriel fire and the devastating consequences of the COVID-19 pandemic on parishes are signs that the church in Los Angeles is being called to a “new beginning.” It is why, in Father Sandoval’s words, the timing of the mission’s 250th jubilee this year is nothing short of “providential.”

“I think the state of San Gabriel Mission right now is how the whole Church feels,” said Father Sandoval, vice chancellor for Ministerial Services for the archdiocese. “This has been a traumatic year. And I think that image of the church under reconstruction following a disaster is an appropriate image of the whole Church right now.” 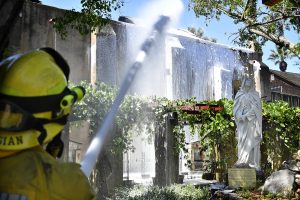 The July 11, 2020 early morning fire at San Gabriel Mission burned the roof and most of the interior of its sanctuary. (John McCoy)

The idea of a “Jubilee Year” originally comes from the Book of Leviticus, in which God commanded Israel to observe every 50th year as a time of mercy — when debts were forgiven, people in bondage were set free, and lands were returned to their original owners.

Since the 14th century, the Church has celebrated jubilees at regular intervals. The pope can also proclaim “extraordinary jubilees” to mark special events or anniversaries or to fulfill a special need (the last was in 2000, celebrated as “The Great Jubilee,” marking the beginning of the third millennium since the birth of Jesus).

To each jubilee the Church attaches certain indulgences, which are opportunities for grace and mercy. They may involve pilgrimages, prayers, or charitable works.

In Los Angeles, the San Gabriel jubilee year is being organized around both senses of the word “mission”: Special events, parish initiatives, and pilgrimage opportunities are being planned, with the intention of educating Catholics about the mission’s past while forming them to evangelize in the future.

“The hope for this jubilee year is not simply to celebrate the past, but to raise up a new generation of missionaries for our time and place,” said Father Sandoval, who is overseeing planning for the special year under the tagline “Forward in Mission” — an adaptation of Mission San Gabriel founder St. Junípero Serra’s famous motto, “Always Forward!”

The year will kick off on Sept. 8 with an opening prayer service at San Gabriel Mission, followed by 40 consecutive hours of eucharistic adoration at 22 parishes around the archdiocese designated as jubilee pilgrimage sites (one in each of the archdiocese’s 20 deaneries, plus St. Catherine of Alexandria on Catalina Island and La Placita near downtown LA). 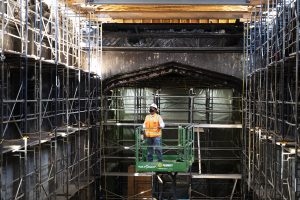 An opening Mass for the jubilee will be held either at the mission or the cathedral on Saturday, Sept. 11, and a closing Mass on Sept. 10 of the following year.

In between, the archdiocese will be promoting “pilgrimage walks” between missions, parish retreats, a historical exhibit on the mission at the cathedral, and a curriculum on local church history and evangelization for use in Catholic schools.

For Huerta, the educational element of the jubilee year is especially important in the wake of recent attacks on statues of St. Junípero, Mission San Gabriel’s founder, fueled by narratives that depict the evangelization of California as an act of oppression.

“We have an opportunity to change the narrative,” said Huerta. One component of the mission’s renewal will be the creation and dedication of an outdoor sacred space on the mission grounds designed by local descendants of Tongva natives.

Both Huerta and Father Sandoval believe there is little use in clamoring for the past, when the opportunities for the mission’s renewal going forward are so obvious.

“We do not want to return to normal. We want to return to the Gospel, which calls us to better than normal, because normal was decline,” said Father Sandoval. “We can’t simply revert to business-as-usual, maintenance mode. This is the moment to be intentionally missionary.”

“Even in these circumstances, even in this disaster zone, we find something new.”