Making sense of our gender moment

The remarkable rise of gender identity theory to prominence — and even popularity — throughout the West over the last decade has prompted a sea change in how young people conceptualize and articulate their self-understandings of gender.

Prior to this, the rare number of children who did report experiencing gender dysphoria were neither labeled as transgender or medicalized. In fact, research shows in 80-85% of cases, gender-related distress is resolved by late adolescence without medical intervention.

But since 2010 this landscape has changed dramatically. There has been a sudden escalation of gender dysphoria and trans-identification among young people, particularly natal females.

According to data from the UK’s Gender Identity Development Service, the escalation began gradually in 2011 before a precipitous rise in 2014. The most recent numbers released in September 2022 reveal a slight dip in referrals during COVID, followed by the sharpest increase yet in 2021.

In just more than a decade, the number of youths seeking interventions at gender clinics has risen by more than 3,600%.

This surge is most pronounced in patients between the ages of 12-18, revealing another novel aspect of this phenomenon: the emergence of late-onset gender dysphoria that first arises in adolescence, rather than manifesting in early childhood.

It is more challenging to identify clear numbers in the U.S., due to our decentralized health care system. But a 2022 Williams Institute study found that trans-identification in young people under 25 has doubled since 2017, and almost half of trans-identified people in the U.S. are younger than 25. A 2021 study published in Pediatrics found that 9.2% of high school students identity as a gender that is incongruent with their sex.

This break from the past in gender identification has unfolded in tandem with a new medicalization model for treating gender dysphoria among young people: gender affirming care (GAC). 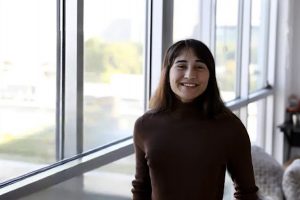 Chloe Cole, a self-described “former trans kid,” de-transitioned after undergoing years of puberty blockers and an irreversible double mastectomy at the age of 15. (CNA/Edie Heipel)

Before 2007, there were no pediatric gender clinics in the US. Today, there are more than 60 clinics that specialize in gender-affirming care for children, and almost 300 clinics that provide gender-related medical interventions to minors, many on an informed-consent basis without physician oversight or a thorough psychological evaluation.

According to a 2022 memo from the U.S. Department of Health and Human Services (HHS), GAC for minors entails a four-stage process: social transition; puberty blockade; cross-sex hormone therapy; and surgeries that alter genitalia, remove sex organs, and/or make other cosmetic changes. While not every child with gender dysphoria will go through all these procedures, the memo clearly endorses the model as a whole, stating that “early gender-affirming care is crucial to overall health and well-being.”

This claim, however, is not well-supported by existing research. The evidence base for gender affirming care is low quality and fraught with numerous methodological limitations, such as a lack of standardized assessment tools, small sample sizes, high loss to follow-up, and minimal research on long-term outcomes. The vast majority of studies lack controls and are not designed to determine a causal relationship between intervention and outcome.

These methodological problems are even more pronounced in the much smaller evidence base for treating young people specifically. Crucially, there are currently no studies that track long-term outcomes of pediatric medical transition.

Moreover, medical transition poses pronounced risks to physical health. Pubertal suppression, often touted as harmless and fully reversible, has been shown to compromise bone density and reduce IQ scores. In 2022, the U.S. Food and Drug Administration (FDA) implemented a class labeling change for puberty blocker use in children after finding these drugs can cause brain swelling and vision loss.

Despite the risks of medical transition and the lack of solid evidence regarding its efficacy, these invasive, lifelong, and often irreversible interventions are touted by GAC proponents as salvific, reducing the risk of suicide. Yet this claim is not well-substantiated. Multiple studies show that suicidality in the transgender population remains high even after medical transition.

For example, two long-term, population-based studies from the progressive countries of Sweden and the Netherlands found consistently higher rates of suicide and all-cause mortality in the transgender population. These studies, among others, provide evidence that medical transition is not as life-saving as advertised.

Recently, several European countries have examined the evidence and concluded that the supposed benefits of gender-affirming care for minors do not outweigh the established risks. Sweden, which has long been a pioneer in transgender medicine, is now prioritizing psychotherapeutic interventions for young people. Finland, France, and the UK are similarly changing protocol.

And on July 28, 2022, the British NHS announced that it will be shutting down its national gender clinic after an independent review concluded that its gender-affirmative model left young people at considerable risk for poor mental health and distress.

Such a volte-face is not yet happening in North America, however. Instead, HHS has framed youth access to GAC as a civil rights issue and is proposing a revision to Section 1557 of the Affordable Care Act that would force health care workers to perform medical transition procedures.

Even on such a controversial subject, there is a point of widespread agreement: transgender people constitute a vulnerable population. Those who experience gender dysphoria, especially young people, need strong social, familial, and communal support. Such support, however, need not entail endorsing gender-identity theory or the medicalization model.

The Church — in her families, schools, hospitals, parishes — has a sacred call to respond with compassion and wisdom, to create pastoral strategies that resist the false dichotomy of uncritical affirmation or outright rejection, walking instead the gentle way of accompaniment.

Abigail Favale, Ph.D., is a professor at the McGrath Institute for Church Life at the University of Notre Dame, writing and teaching on topics related to women and gender from a Catholic perspective. Her most recent book is “The Genesis of Gender: A Christian Theory” (Ignatius Press, $17.57).