One year after the arson attack that ravaged the interior of Mission San Gabriel, restoration work at LA’s oldest Catholic outpost is starting to yield visible signs of progress.

The fire, allegedly set by San Gabriel Valley resident John David Corey Jr. on the morning of July 11, 2020, destroyed the mission’s roof and heavily damaged parts of its interior. Corey was arrested in May following a months-long investigation by local authorities. He is currently awaiting trial on felony charges related to the fire. 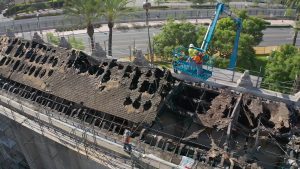 In the last year, restoration efforts have focused on preparing the historic mission for the celebration of its 250th anniversary jubilee year, scheduled to kick off this September.

Construction crews have nearly completed replacing the mission’s roof. The new roof will be protected by fire-retardant sheeting and pitched wooden shingles to be installed this month. Once work on the roof is completed, cleaning and repair work on the walls of the church’s nave can begin. 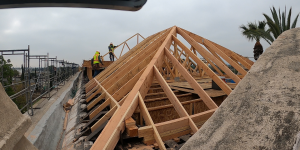 Once work on the roof is completed this month, crews can begin reconstruction on the church's interior.

Meanwhile, crews have also been working to restore the floors of the church’s sacristy and the baptistery, which both sustained heavy damage from the estimated 150,000 gallons of water used to douse the flames, causing them to sink several inches. Many of the original tiles in the sacristy were broken, and the pedestal that holds the baptismal font had shifted.

After consultation with the restoration team, headed by local structural engineer Mel Green, a cement slab was poured in the sacristy and the baptistery in early July. The original tiles from the sacristy, which date back to the church’s early construction, will be repaired and replaced in the coming weeks. 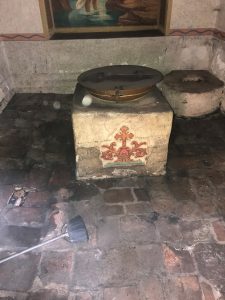 The floor of the baptistry sunk under the weight of the water used to put out the fire.

During repairs, a team of archeologists from local environmental consulting firm SWCA conducted digs in the sacristy, finding glass beads and brownware pieces, which were commonly used during the mission period. The historic, hand-carved wooden statues that sit on the altar reredos have also been cleaned and are in the process of full restoration.

Repairs not covered by insurance have been funded by the mission’s Fire Restoration Fund, which has raised nearly $400,000 in donations from individuals, foundations, parishioners, and “Mission family members” around the country and the world. 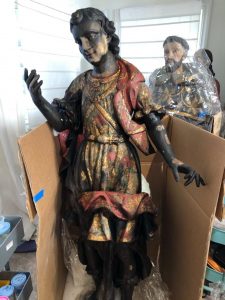 The historic hand-carved wooden statues that sit on the altar reredos have been undergoing restoration efforts at the studio of Rosa Lowinger & Associates.

Last month, Archbishop Gomez announced a special Jubilee Year to mark the mission’s anniversary. In a letter to LA Catholics, the archbishop wrote that the year will celebrate San Gabriel Mission’s status as the “first church in what is now the Archdiocese of Los Angeles.”

“This Jubilee Year recognizes not only the Church’s beginnings in Los Angeles, but also the Christian beginnings of America and the influence of Christian values in the formation of our national identity,” he wrote.

The Jubilee Year will begin on September 11, 2021, and close on September 10, 2022, with a closing Mass at San Gabriel Mission. The church is expected to be fully restored at that time.

To donate to the Mission restoration fund, visit lacatholics.org/restoration/.