I’m not a fan of zombie movies in general, but I’m fascinated by the phenomenon: the relentless attack of brain-eating undead with our only defense being endless firepower and a double tap. It doesn’t take Freud to deduce there’s something more going on here than that a zombie apocalypse is the best argument the NRA has for everyone owning an AR-15.

What is it deep in our reptilian cortex that somehow thrills at this notion that everyone else — by which I mean our neighbors, friends, and fellow citizens — wants to feast on us? Why is it satisfying that we must slaughter with bloody abandon every other human being who isn’t part of our little band of imperiled survivors?

I do have a favorite zombie movie, however. It is “World War Z.” I like it because it offers up an explanation for the zombie phenomenon that pits us not only against our fellow man, but against nature. Zombieism, it turns out, is the fault of a virus. As a virologist not long for this world explains in the movie: “Mother Nature is a serial killer. No one’s better. More creative.”

Watching the world succumb to the fear of the coronavirus, aka Covid-19, I kept thinking of scenes in “World War Z.” For example, while we clean off store shelves of Purell and toilet paper, I remember the looting of the grocery store in Philadelphia as the doomed citizenry try to stock up before the inevitable.

Zombies come in bunches, but start as one. Each bloody bite infects a second, and then two become four and four eight and eight 16 as the infection spreads exponentially. When it comes to Covid-19, it only takes one to make us fearful. One sick person is enough to shut down a university, a factory, a cruise ship, a church.

And as we race to limit the contagion, we take increasingly draconian steps to fight the threat. Italy’s government, like an exasperated parent, grounded its entire population. Even Bethlehem is locked down. There is no room at the inn these days.

Yet because the virus is particularly sneaky, we aren’t sure who has it. Despite the efforts to constrain its spread, we are unable to identify easily who is infected and who is not. Everyone is suspect: Our priest. Our spouse. Our cashier.

In zombie movies, the dark shadows outside our window, the scratching sounds at our front door fill us with dread. The slavering, dull-eyed fiends are no longer human beings. There is no room for empathy or kindness. It is “us” versus “them.” And in moments like these, everyone else is a “them.”

We are seeing a bit of this in real life as well. With relentless news coverage, government confusion and fiscal turmoil, we can be forgiven our fear of the unknown. The danger is when this drives us apart. Some communities want to close their doors. Anyone who might need to be quarantined can be quarantined somewhere else, not in my backyard or community hospital.

The ties that bind us together grow looser, and we start keeping our distance — six feet, to be exact — from one another. 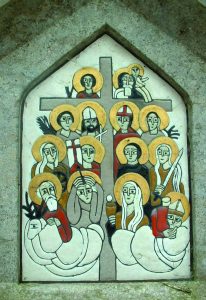 Sts. Acacius, Barbara, Blaise, Christopher, Cyriacus, Catherine of Alexandria, Denis, Erasmus of Formia, Eustace, George, Giles, Margaret of Antioch, Pantaleon, and Vitus. The Fourteen Holy Helpers are a group of saints venerated together in Roman Catholicism because their intercession is believed to be particularly effective, especially against various diseases. (Wikimedia Commons/Immanuel Giel)

What we are experiencing is no movie, of course. In “World War Z” (spoiler alert) weakness becomes strength, and sickness a cure. In real life, weakness is just weakness: the hourly worker who can’t skip work despite fever and cough, the uninsured or underinsured, the doctor with no access to test kits, or the patient without the resources to self-quarantine, all are potential risks.

The virus is exposing our systemic weaknesses as well as our physical ones. The vulnerable become still more vulnerable, the weak still more weak, the unlucky remain unlucky.

And this is where the Church steps in. It reminds us of the common good, the need to care for those most helpless and in need of care. There are saints who have modeled such concerns, people like St. Damien de Veuster and St. Marianne Cope, who served the leper colonies of Molokai and Oahu, caring for those who were treated like the zombies of their day.

Or the brave sisters and priests of the Diocese of Memphis, who in 1873 and again in 1878 tended to the victims of a terrible Yellow Fever epidemic that killed thousands. While others fled the city, these heroes and heroines risked, and often lost, their lives caring for the sick.

Our chronicles of saintly men and women are filled with examples of those who have cared for “the other,” be they plague victims or AIDS victims. Such men and women responded to the challenge we all face, to see Christ even in our grievously ill brothers and sisters.

Zombies are fiction. Saints and heroes are real. Our faith asks us not to fear others, but to care for them.