Looking for a divine spark

Like all archetypes the archetype of pilgrimage is experienced as compelling. Sometimes the reasons seem obvious to the pilgrim and, on the other hand, the reasons offered, especially to the outsider, do not always seem adequate to the compulsion that is felt. — Jean Dalby Cliff and Wallace B. Clift, “The Archetype of Pilgrimage: Outer Action With Inner Meaning.”

The compulsion to go off and wander — to connect, to complete oneself, to heal a wound — is as old as man himself. It’s certainly been a continuing theme in my life.

In my younger days I hitchhiked all around the country. I once drove from LA to my New Hampshire hometown and back, alone, and made it a pilgrimage by going to Mass every day for seven weeks. I’ve been a pilgrim in California and within the archdiocese, visiting innumerable gardens, missions, churches, studios, and museums.

But our real pilgrimage is interior. If a pilgrim is defined as “a person who journeys to a sacred place for religious reasons,” then for every seeker who walks the Camino, another never leaves home.

You can be a pilgrim in your own neighborhood, walking the streets, praising the flowers and birds, praying. You can be a pilgrim among your family and friends: offering a greeting, sharing your bread, opening your heart to all those you meet on the way.

A 19th-century classic on the subject is “The Way of a Pilgrim,” whose anonymous Russian author was a homeless wanderer with a knapsack, a hunk of dried bread, and a Bible.

One question obsessed him: how to follow St. Paul’s instruction to pray without ceasing (1 Thessalonians 5:17).

A starets (holy man) he met on his travels finally taught him to call upon the name of Jesus, with spirit, lips, and heart, tens of thousands of times a day.

“Lord, Jesus Christ, Son of the living God, have mercy on me, a sinner” — the “Jesus prayer” immortalized by J.D. Salinger in the novel “Franny and Zooey” — at last of its own accord began to voice itself deep inside, the pilgrim found, even while sleeping.

Doherty came from a long line of Russian hermit-mystics who wandered the countryside with the “Jesus Prayer” in their hearts. She married American journalist Eddie Doherty, and herself became a popular spiritual writer. In “Strannik” (1978), a Russian word meaning “pilgrim,” she observed that while all are called to pilgrimage, few can or will go. 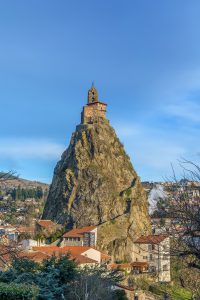 Pilgrimage doesn’t necessarily involve traveling, or traveling into the country. The journey is to our own hearts, and can thus take place in the poustinia (a sparse hut or room) of our apartments, or by walking through the streets of a city. Wherever we go, we go with bare feet — in spiritual poverty — and because we end up walking into the fragmented stones and sharp rocks of other people’s hearts, our feet get bloody.

We’re chaste, we’re obedient, we fast and, like Christ, we’re constantly called to move on to another place.

“A pilgrim preaches the gospel,” Doherty wrote, “but in order to preach it he has to live it day by day, hour by hour, minute by minute. For what is he really about, that pilgrim of mine? He is preaching the gospel with his life and so his pilgrimage has to reflect his life.”

Jennifer Lash (1938-1993) was a novelist, wife, and mother. In the early 1990s, suffering from cancer, and following a difficult operation, she took off alone for the Camino de Santiago: a solitary pilgrimage through France to Spain. “On Pilgrimage” is her account of that journey. In too much pain to walk, she took trains, buses, taxis. She went to Vezelay, Lisieux, and Lourdes; to Le Chaise-Dieu and Saint-Gilles.

A seeker rather than firmly devout, she was open, observant, wry, deeply sensitive to nuance, beauty, and the spiritual temperature of any given place.

In one sublime passage, she described standing in the basilica of St. Michel D’Aiguilhe in Le Puy, France, hearing a tremendous gust of wings, and high above the narthex, spotting “the unmistakable, compelling face of a barn owl. Again and again it flew and paused, frantically crashing its white body with terrible hopelessness against the dusty windows. Every so often it would fly the whole length of the church only to soar up again into another barrier of light… There were holes and spaces, if only it would see them. Each time it failed, the pause and stillness became longer, and the fearful despair of the bird felt greater.

“Later, the whole experience haunted me… I suddenly thought, what if God witnesses in every man a divine spark, which flies within us blindly, like that bird, crashing in terror, punched and pounded from wall to wall, blinded by obstacles and dust, and yet, God knows, that there is a way for natural freedom and ascending flight. What an extraordinary pain that witness would be.”

May God witness that divine spark in us as we embark upon, or continue, our own pilgrimage. May our hearts be consoled by the knowledge that he trudges the path alongside us.