Looking for God in the Hollywood Bowl

The Hollywood Bowl crowd always provides a wide spectrum of LA life. There are the superrich, those people with the fancy picnic baskets, who dine in private boxes. There are the rest of us, who occupy various rungs on the socio-economic ladder.

This summer, though, there also seemed to be more people than usual intent on demonstrating — by wardrobe, hair color, and tattoo art — how nonconformist they are. But there were so many of them that I started to think I was the true bohemian, due to my bold choice of wearing a sport shirt and a pair of blue jeans, with the only metallic ring accessory wrapped around my ring finger.

I also had the distinct feeling there was probably not a large representation of the Legion of Mary, Knights of Columbus, or the odd altar society on the Hollywood Bowl premises that night. I checked that thought when it came into my brain, because it sounded judgmental in my inner monologue, and how could I tell if those people with the nose rings, rainbow-colored hair, and “thrift store chic” clothing were not Latin Mass attendees?

When we got to those impossibly hard wooden benches inside the Bowl, and the lights dimmed, I began to have doubts about my doubts.

On the program this night was the showing of the 1984 multi-Oscar winning film “Amadeus.” The Hollywood Bowl has been doing this kind of programming for several years now. They show a film famous for its music on gigantic TV screens where the soundtrack has been removed and replaced by the Bowl orchestra playing the music live.

I had not seen “Amadeus” in a long time and forgot how good a movie it was.

And having a movie about Mozart, where his music accompanies his strange, comic/tragic journey remains a brilliant theatrical device even decades after the film was initially released. It is a film about a complicated man and the mystery of genius. It is also a film whose main character is a man enshrouded in envy and jealousy. 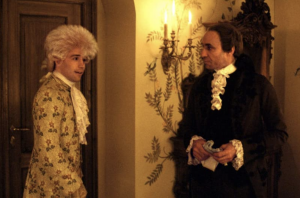 Court composer Antonio Salieri tells the tale in flashback, and if you have not seen it, I will not say much else. What I can say without ruining the movie is that Mozart was a genius, Salieri was a journeyman, and Salieri acts in a way to hurry the already self-destructive Mozart to an early grave.

The focal point of Salieri’s disdain is not so much aimed at Mozart, but toward God. The mediocre composer is outraged that God would bestow such a creative force of beautiful art on a man-child — and a spoiled and petulant man-child at that. It was a theme sometimes used for intentional wry comedic purposes and sometimes with dead seriousness.

Watching a movie with thousands of people outside is a weird experience in and of itself. Listening to the reactions as Salieri discusses his issues with God made me think I was not in the company of many co-religious. I could almost feel that Catholic bubble, which had burst on me so many years ago, begin to envelope me anew.

Salieri, as an old man, confesses to a priest how he prayed to God to intervene on his behalf when he was a boy. His stern father was dead set against his only desire: to write and perform music. When the father dies prematurely, and we see the young Salieri smiling while we hear the old Salieri explain how joyful he was that God had “answered” his prayer, we all laughed.

It was when the film goes a little deeper and a little harder with Salieri’s God issues and the strange reactions to those issues from the Hollywood Bowl crowd that made me squirm a little in my seat — or maybe it was just those rock-hard wooden benches.

Salieri knows Mozart is a man with miraculous musical gifts. He cannot reconcile that God would shower him so and leave him, Salieri, mired in mediocrity. Naturally, he blames God and renounces his faith. When he does so, sometimes ironically comic, sometimes bitterly real, the same reaction came from the Hollywood Bowl audience, or at least a large portion of it: laughter and sometimes applause. Some members of the audience clapped during a scene when Salieri, in his final act of renouncement, places a crucifix into a roaring fire.

I felt I was not watching the same movie as everyone else. It was not as if I was watching a film about the Council of Nicaea. It was not particular Catholic dogma or deep theological premises the audience was deriding, but rather, the very notion of God, especially a Christian God.

If this secularist trend continues, I may be writing my next dispatch by candlelight in a catacomb.