After years of steadily declining attendance and a pandemic that kept even its most faithful parishioners away for months, St. Bernadette Church in Baldwin Hills was in need of a jumpstart.

And it just got one, courtesy of some rare relics of its patron saint.

For three days at the start of August, relics belonging to St. Bernadette Soubirous visited Los Angeles, the final stop of a four-month U.S. tour that passed through 28 dioceses. The ornate golden reliquary containing a fragment of the 19th-century French saint’s ribs spent the most time at her namesake parish in LA, which also happens to be celebrating its 75th anniversary this year.

“This happened not accidentally, but just at the right time,” said Deacon Jim Carper, parish life director at St. Bernadette. 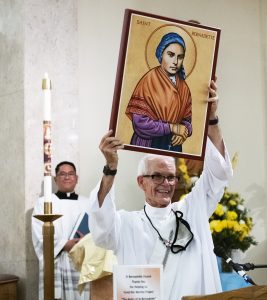 Among those who made the pilgrimage to St. Bernadette was Archbishop José H. Gomez, who celebrated a special evening Mass there on Aug. 1. More than 300 people turned out, including members of the Order of Malta, which helped organize the U.S tour, as well as Catholics from around the archdiocese. There were also veterans of past pilgrimages to Lourdes — where the Virgin Mary is said to have appeared to St. Bernadette in a rock cave in 1859 — who took the opportunity to reconnect with the saint.

For longtime parishioners, the relic pilgrimage was a moving spiritual moment. In the words of Deacon Carper, the parish “has had a rough time over the years, with a variety of different issues.”

Deacon Carper’s role comes with most of the responsibilities of a pastor. As a deacon, he can baptize children, officiate weddings, and lead Communion services. For confessions and Mass, he counts on the help of a network of retired priests.

Just as the community has changed, so has St. Bernadette. Over the last few decades, many of the older families of Creole and African American descent who helped build the parish have retired, moved, or passed away. Home prices have soared, making it harder for young families to move into the area.

When COVID-19 struck, St. Bernadette was forced for months to resort to livestreaming the Sunday Mass. The church was only able to reopen its doors for indoor, in-person services in the summer of 2021. The parish maintains a thriving food kitchen for the homeless, a prison ministry that connects children with their incarcerated parents, and hosts a program that offers free vision care and glasses for families in need.

But the process of filling the pews on Sundays again has been slow.

“Our parish is an old parish,” explained Barbara Evans, who has belonged to St. Bernadette with her husband Amos since 1976. “Most of our parishioners are ‘mature,’ and so a lot of them haven’t come back yet from the pandemic.” 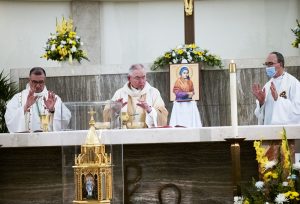 Archbishop Gomez celebrates Mass with the relic of St. Bernadette on Aug. 1. At right is Bishop Jean-Marc Micas of Tarbes-Lourdes, France, who traveled to LA for the last stop of the relics' four-month U.S. tour. (Victor Alemán)

For the Evans’, the Mass with Archbishop Gomez was an opportunity to seek St. Bernadette’s intercession for their health as well as to pray for fellow parishioners who are seriously ill or homebound.

Others traveled from further away to venerate the relics.

Nelson and Teri Taylan came from St. Finbar in Burbank. For them the Mass brought back vivid memories of their 2013 pilgrimage to Lourdes with their daughter Trinity and son Noah, who suffers from Duchenne muscular dystrophy, a debilitating genetic disease that has confined him to a wheelchair.

Visiting Lourdes, Nelson recalled, “was like heaven on earth.”

“Our whole faith changed,” Teri agreed. “Internally, we’re so much better off today than we were before.”

The Taylans traveled to Baldwin Hills with their children out of gratitude, and to invoke St. Bernadette’s intercession for the conversion of hearts, including one seriously ill relative who has stopped practicing the Faith.

Every year, millions of pilgrims like the Taylans visit the site in southwestern France where the Virgin Mary is said to have visited St. Bernadette. The waters of Lourdes, drawn from a spring discovered by St. Bernadette near the grotto, are known for their healing properties. St. Bernadette, who became a religious sister and eventually died from tuberculosis at 35, always emphasized the importance of prayer and faith.

“The water will have no virtue without faith,” she was known to say. She was canonized in 1933.

But for a few midsummer nights, the sense of healing that pilgrims experience in Lourdes was in the air at St. Bernadette. 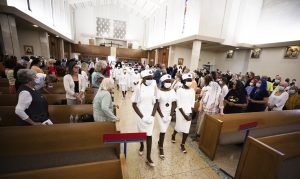 The Ladies Auxiliary Division of the Knights of Peter Claver process at the start of the Aug. 1 Mass at St. Bernadette Church in Baldwin Hills. (Victor Alemán)

For 31-year-old Amber Montgomery, who grew up going to St. Bernadette, the Mass with the relics inspired a “renewed sense of hope” that parishioners will soon be returning to church, especially her fellow millennials.

“I went to Catholic school my whole life and most people my age don’t go to church,” she told Angelus. “None of my friends go to church. So I was just really praying [to St. Bernadette] for people to turn back to the Lord.”

Accompanying the relics was Bishop Jean-Marc Micas, the newly ordained head of the Diocese of Tarbes-Lourdes. He flew from France for the last leg of the U.S. tour, which also included stops at the Cathedral of Our Lady of the Angels and St. John Baptiste de la Salle in Granada Hills.

He took part in a candlelight vigil outside St. Bernadette on July 31, and concelebrated the Mass  with Archbishop Gomez at St. Bernadette, and presided another evening Mass at the cathedral on Aug. 2, where hundreds waited in line to pray with the relics throughout the day.

For Bishop Micas, the message of Lourdes is one of divine mercy. He said that inspired the motto he adopted for his ordination as a bishop just more than two months ago: “God’s mercy will extend from age to age.”

“Lourdes is a very, very important place of grace, where any kind of sinner can come and receive the sign of God’s mercy,” Bishop Micas told Angelus.

“Either people can come to Lourdes to get this sign of God’s mercy, or it can reach people wherever they are, which is what this tour is about,” he added.

Bishop Micas said the relics’ American journey was an overwhelming success, having reached more than 200,000 people around the country. Several U.S. dioceses, he said, have already inquired about hosting the relics the next time around. 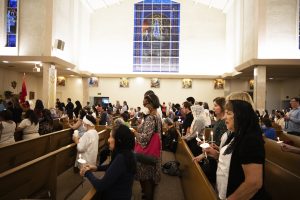 Faithful during the Aug. 1 welcome Mass for the relics at St. Bernadette Church. (Victor Alemán)

But for Deacon Carper, numbers don’t tell the whole story. St. Bernadette’s trademark charism of “the little way,” he believes, is a call to do things differently.

“You hear this constantly from her: ‘I’m not a big deal, I just do what God puts in front of me,’ ” said Deacon Carper. “That’s so important for us as parishioners, is that what we accomplish, we accomplish by following the little way.”

Archbishop Gomez struck a similar theme in his homily at St. Bernadette, noting the saint’s humility.

“She spoke from her heart in simple language, just telling people what she saw, and what she heard,” said Archbishop Gomez. “She talked of the power of God’s love in her life.”

Bernadette’s witness, he told worshippers, is “a beautiful reminder of the mission that we all have, in our families, in the places where we work, in our communities, in our schools.”

At their church, parishioners hope their patroness’ visit has opened a new chapter. Several noted the influx of new residents in the area, together with the appearance of new faces at Sunday Mass.

“It’s great because [the parish] is much more diverse than it was before, and that’s a good thing,” said parishioner Evans.

Her husband, Amos, hopes that the relics have brought a “spark” to the parish.

“We’ll start anew,” said Amos. “So we’re looking forward to a rebirth of the church, if you will.”