Sara Larson is executive director of a Milwaukee-based Catholic nonprofit called Awake Milwaukee, whose mission “is to awaken our community to the full reality of sexual abuse in the Catholic Church and work for transformation and healing.”

How is Awake different from any number of similar movements?

“Many people believe that there are only two options: get angry and leave the Church, or bury your head in the sand and pretend the abuse isn’t happening. Awake tries to fill that gap. We recognize the brokenness of the Church and we also still love our Church.” 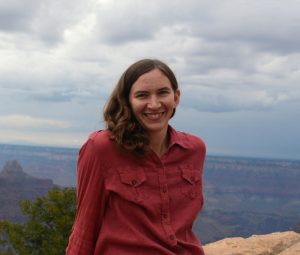 They try to support all survivors, including the person who loves the Church in spite of everything and stays, but is hemorrhaging silently and in exile, suffering his or her terrible wound alone.

“We don’t need to duplicate the work done by the many other wonderful organizations, support groups, and diocesan-sponsored initiatives across the country. Some are exclusively focused on advocacy and making institutional changes. Some are focused on education; others on prayer.”

“It’s been important to us to include all of those activities.”

Larson has been a Catholic her whole life, active and working in parish life, but hadn’t paid much attention to the abuse until the revelations in 2018. The Pennsylvania Grand Jury report and the McCarrick scandal hit her “like a ton of bricks.”

“Reading the stories of survivors and realizing it was my Church that had done this was profoundly painful. The Church that I love, that I have served. I felt personally responsible. That was me; that was us.”

The story we tend to tell ourselves is that there were a few bad apples, a long time ago, who abused children. It was awful, then we found out and we fixed it and now things are better.

“That’s too simplistic. The story doesn’t capture the whole picture and it doesn’t leave room for the ongoing healing that needs to take place. I had the sense that many of us in the pews were deeply concerned, and hurting, but that we had no real place or forum to discuss these issues.”

In the fall of 2018, she collaborated with a group of staff members to offer listening sessions and learning resources at the parishes where she worked. At the beginning of 2019, she started a blog. 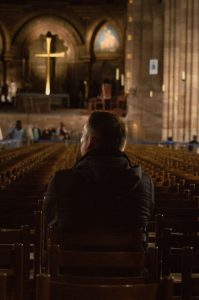 Then, in March 2019, eight or so gathered in her living room. “We were hurt, angry, and sad. We didn’t know where we were going, but we knew that we were being called to do something together. That group of Catholics eventually became the leadership team for Awake.”

They discovered that small group discussion is transformative. “What then shall I do?” people asked John the Baptist (Luke 3:10). He responds to each individual in the crowd based on their station in life, gifts, temperament.

They soon launched Awake Milwaukee and published an “Open Letter to Survivors.” They officially became a nonprofit in 2020, with Larson as executive director.

“We came to think of the situation in terms of the body of Christ as set forth in Corinthians 12:26. When one part of the body is suffering, the whole body suffers. If we don’t take the time to learn and understand, the wound is just going to keep festering.”

“Awake tends to draw survivors who are deeply wounded but who want to remain in the Church. They want their pain to be heard and held, not papered over. They often want to talk to someone who is part of the Church but not part of the diocesan hierarchy.”

We tend to distill the question down to: Are we keeping children safer in our Church today? That’s really important and we’re doing better, says Larson. But the full reality also includes both children and adults. Many are starting to refer to the “twin crises” of sexual abuse and leadership failures.

“If we want to hear the voice of the truth in the Church right now, let’s listen to the survivors. Theirs are prophetic voices. If we want to be who God wants us to be, I really believe they have a powerful message.” 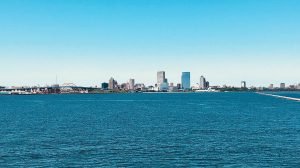 The Milwaukee skyline, where Awake was founded and operates. (Courtesy of Awake)

Laity versus clerical is not the right approach. This is neither a liberal nor a conservative issue. This is an issue on which we as a Church need to work together, on which we can be united.

“It’s easy to point a finger at others in the Church, saying, ‘This is their problem, they need to fix it.’ It’s harder, but more helpful, to step into our responsibility as baptized members of the Church and to consider what we can do to help.

“I take personal pride when, for example, I see our members serving the poor — that’s my Church! So when horrible things happen in the Church, I feel we should take personal responsibility for that as well.

“If we feel survivors deserve a sincere, heartfelt apology, we are the Church. We can offer that apology. Obviously it’s not perfect. But it’s within the realm of something we can all do.”

Awake’s mission is focused on the Archdiocese of Milwaukee, but already, for example, through the “Courageous Conversations” available on their website, they’re reaching a wider audience.

“We have a commitment to hope. We care about this issue. We want to address it honestly. And we want to do so in the context of faith. That’s the charism of Awake.”