Jaime Diaz didn’t know if he would live or die.

He was diagnosed with a brain tumor that needed to be surgically removed. As Diaz lay in his hospital bed, he prayed to St. Maria Soledad, a Spanish sister whose mission was to care for the sick and dying.

What happened next would lead Diaz on a mission of his own and consequently, a new lay organization in the archdiocese.

“I started to pray to Mother Soledad,” recalled Diaz, a parishioner at the Cathedral of Our Lady of the Angels. “She talked to me and said, ‘I’m going to take care of you but you need to help me.’ ”

Thanks to multiple surgeries, Diaz is now tumor-free and making good on his promise to St. Maria Soledad and the religious order she founded, the Servants of Mary, Ministers to the Sick.

Two years ago, he asked the LA convent if it was willing to create a companion lay fraternity. Mother Provincial Alicia Hermosillo agreed, with one caveat: that Diaz help with the recruiting effort.

That led to the establishment of the Fraternity of Lay Sons and Daughters of St. Maria Soledad last October, making it only the third such chapter in the United States. After a yearlong formation process, members, just like the sisters, will visit the sick in their homes to provide care and comfort.

The inaugural 13, including Diaz, are men and women with backgrounds in nursing, care-taking, and lay ministry. Some, like Josephine Ruiz, have also benefited from the sisters’ work.

“On the night my mother took her last breaths, Sister Daisy Castruita was here with us, praying with us, helping us be at peace. That was beautiful, just beautiful,” described a tearful Ruiz, a parishioner at St. Gerard Majella Church near West LA. “I always thought, how can I repay that? What can I do to help?” 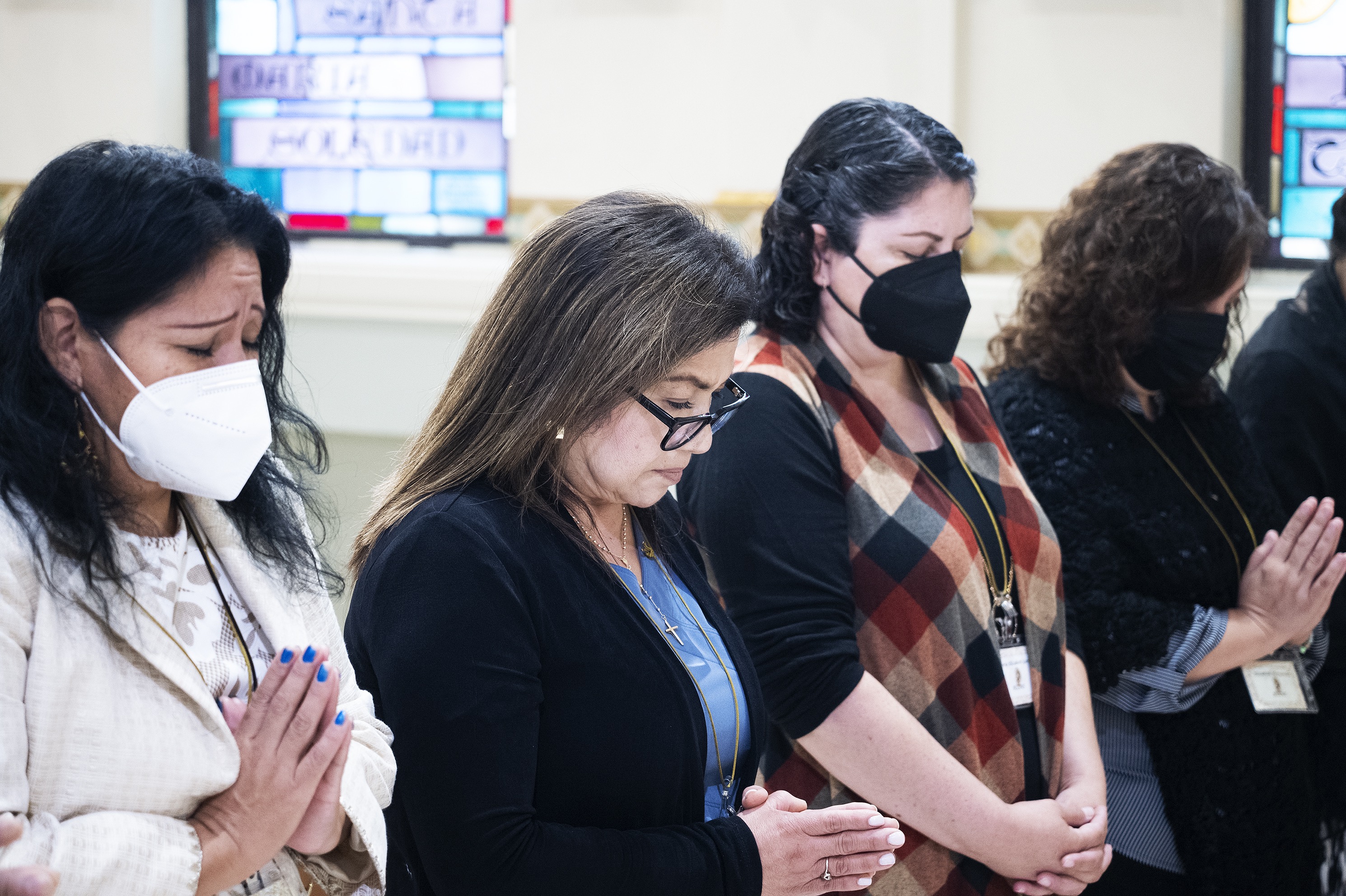 Aspirant Josephine Ruiz (second from left) is one of 13 laypeople currently in formation. (Victor Alemán)

The sisters say this fraternity is the answer — there’s just not enough of them to serve the entire Los Angeles area. The small convent has only eight sisters that actively provide care and yet, last year, managed to assist 230 patients as well as 155 priests. Sister Margarita Rico, SdeM, is the fraternity coordinator and a registered nurse.

“We go everywhere, day or night, but we still have a waiting list,” said Rico. “We try to get to the urgent cases, the ones where people are dying. … We need the laity to be involved.”

The first lay fraternity in the Sisters’ Province of the United States, started in Puebla, Mexico, in 2006. Kansas City, Kansas launched in 2019 and a year later so did New Orleans. In Los Angeles, “aspirants” started their formation with a special Mass last Oct. 11. Each received a blessing from Msgr. John Woolway and a crucifix and prayerbook provided by the convent’s superior, Mother Claudia Rodriguez.

Then it was time to start classes at the convent. Rico, who teaches the weekly lessons, described the formation process as “intense.” The aspirants are formed in the spirituality of the order; being contemplative in action and seeing Christ in all people, being abandoned to divine providence knowing God will provide, and collaborating with Christ and Mary in the salvation of souls.

Additionally, aspirants study nursing and bioethics. They attend retreats, get homework assignments and take exams. Despite the workload, Ruiz looks forward to the classes.

“St. Soledad overcame obstacles and did what she needed to do. We can do the same. We’re all called to be saints,” said Ruiz. “For me, this is so big.”

Rico is pleased with her students’ progress, saying they are motivated to make it to the final commitment ceremony where they’ll promise to serve one year.

Then the real work begins. The new members will serve patients, Catholic or not, as much as their schedules allow. Those with nursing backgrounds can attend to patients who need more advanced medical care, while other members can offer prayers and simply be present. Either way, Rico noted, patient families get a much-needed break.

She recalled a recent patient of hers who was suffering with terminal cancer. She fed him, brushed his teeth, tidied his room. They prayed the rosary and talked about dying. After nearly four decades of service, Rico can use her personal stories to prepare the aspirants to face the mission to come with faith.

“These are really precious moments. The patients are sharing their innermost being with you,” said Rico. “To me, instead of sadness, there’s joy. It’s preparing the soul of the patient to meet the Lord.” 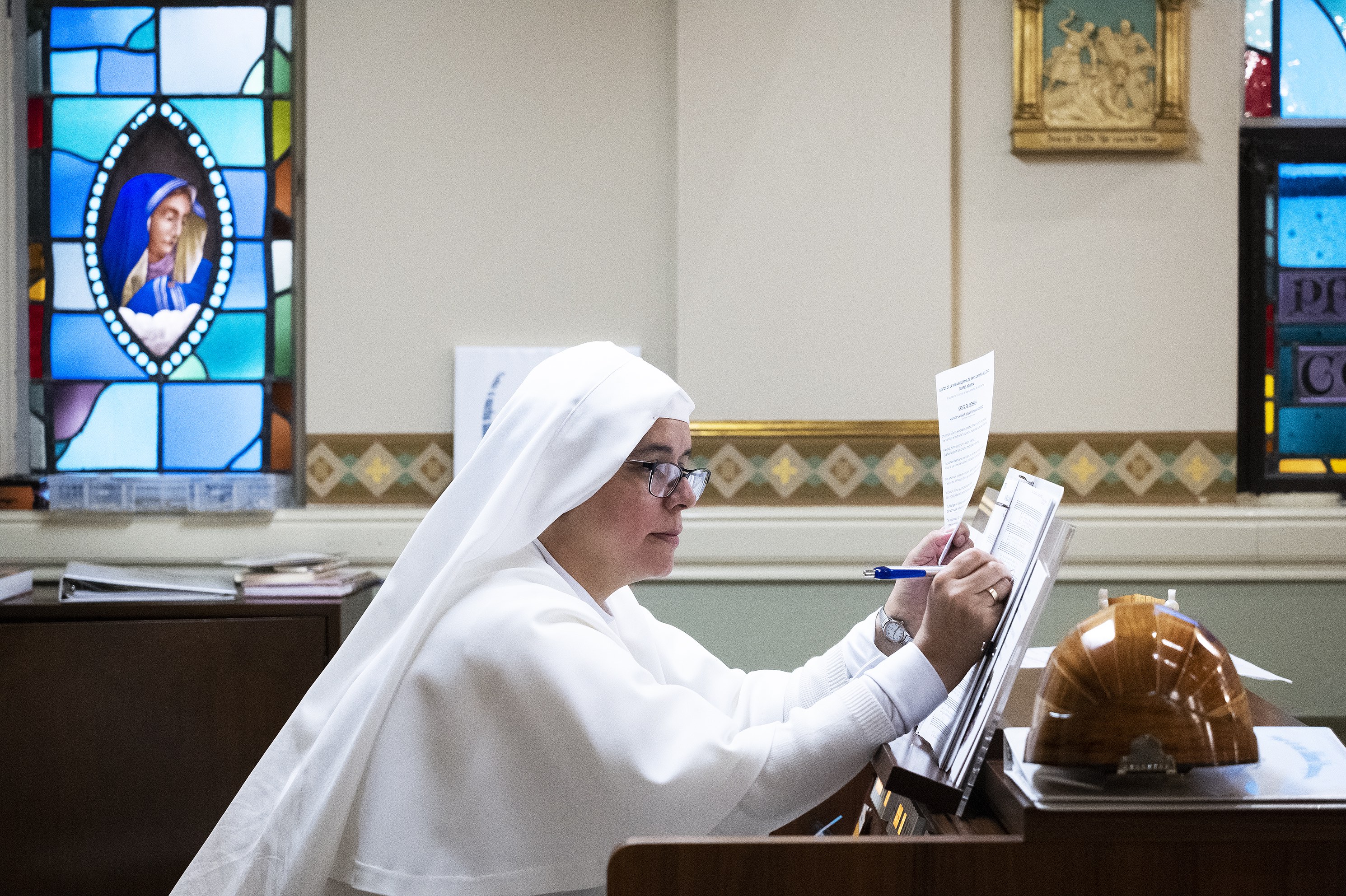 A sister of the Servants of Mary, Ministers to the Sick, works on coursework for the lay ministry applicants. (Victor Alemán)

Diaz, who is also a member of the Knights of Columbus, said he’ll be guided by faith and his own health history.

“When someone came to visit me at the hospital or my house, I only needed a little laugh to feel better, recover a little faster,” explained Diaz. “We just need to pray with the patients and stay with them.”

Rico sees the apostolate as an example of what Pope Francis recently called for in his message for the annual World Day of the Sick, Feb. 11: prayers and “closeness towards those who suffer.”

“My main vision is for laypeople to know they have a call within a call,” said Rico. “They might be called to be married or single … but everyone also has a call from the Lord to do good to others and in doing so, find great peace and joy.”

Ruiz said she’s answering that call even if her adult daughters don’t totally get it yet.

“They say, ‘Mom, are you studying to become a nun?’ ” laughed Ruiz.

“No,” she replied to them. “I am just very grateful and want to serve.”