Joe Montanez walked up to the first designated “Garden of Healing” in the Archdiocese of Los Angeles, just outside the front doors of the St. Camillus Center for Pastoral Care near East LA.

He reached his hand out to touch the water pouring out of an installation feature known as “The Weeping Wall.”

Montanez said he needed to feel it.

He acknowledged the sounds of the moment: an ambulance siren, the rumble of delivery trucks, a police helicopter buzzing above, the horn of trains in the near distance.

“This can be a peaceful area,” he said with a half-smile.

For those like Montanez directly impacted by sexual abuse in the Church, the establishment of this pacifying space has been an idea years in the making.

Archbishop José H. Gomez, who presided over the garden’s Oct. 26 dedication, announced it would be the first of several, with the goal to have at least one in each of the Archdiocese of Los Angeles’ five pastoral regions.

“This garden is a promise to our brothers and sisters: we will never forget, and you are never alone; we go with you, always,” said Archbishop Gomez during the dedication of the garden of healing. “We pray that in the silent beauty of this garden, many may come to hear God’s voice, to know his love and compassion, and his longing to comfort them, to strengthen them, and to make them whole again.”

Also present was regional Auxiliary Bishop David O’Connell and retired Bishop Armando Ochoa of Fresno, originally an LA priest and later an auxiliary bishop here. He is a cousin of Montanez. 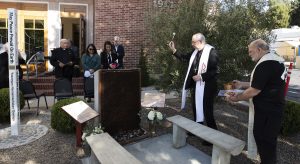 Currently living in Pismo Beach, Montanez explained to the gathering that he had been abused by a now-deceased priest when he was an altar boy, starting at age 11 while growing up in Santa Barbara. His personal sanctuary to deal with his pain was tending to his family’s massive garden.

Having then spent 36 years as a landscape design teacher at a middle school in Northridge, Montanez decided to invest his expertise in creating the garden project’s form and function. Montanez said he was fortunate that on the piece of property at St. Camillus, an olive tree had already been planted that could be incorporated along with a thin white prayer pole that reads “May Peace Prevail on Earth” in various languages.

Montanez said he hoped future gardens — such as one at Mission San Luis Obispo, where he now attends Mass — would include an arch above the water installation full of a hybrid tea “peace” rose. He also prays that such a garden of healing will one day be established at the parish where his abuse began, St. Raphael in Santa Barbara.

For the last five years, Montanez has been working on his recovery with Heather Banis, Ph.D., victims assistance ministry coordinator for the archdiocese. A major step was his desire to do public speaking, starting in April 2019 when he participated in a “Liturgy of Lament” at St. Dorothy’s Church in Glendora. It was the first public disclosure of what happened to him.

Back then, he was simply known as “Joe.” Now, he says he uses his full name “because I’m proud of who I am.”

“God uses us for reasons we don’t understand,” said Montanez, “but I have vowed since the first time I went to St. Peter Claver Church [in Simi Valley] to talk to Dr. Banis, I wanted to help those out there. Good things are happening now. My feeling is: If we are a true community, let’s build healing gardens for those parishioners still out there who can come back to the Church and say — something’s being done.”

Banis said she is proud of how Montanez has gotten this far in his journey, and that his “dream” is being fulfilled.

“I really love that we’re making something tangible,” said Banis. “It’s a gift from the Church, and the parishes who believed in this and made this financially possible. To pull this all together, embodied in this way, and have it be the vision of Joe, it is very overwhelming.” 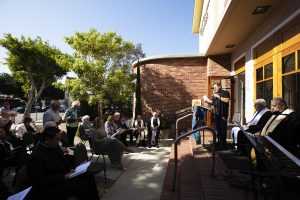 Retired Bishop Armando X. Ochoa of Fresno (at far right), a cousin of Montanez's, was among the guests at the Wednesday afternoon dedication ceremony. (Victor Alemán)

Father Chris Ponnet, pastor at St. Camillus Church and chaplain at the nearby USC Keck Medical Center, remarked during the dedication that as churches in the neighborhood were closed during the recent COVID pandemic, many in the area gathered outside the center to walk the labyrinth and pray at the peace pole. Now they have this garden as well.

“Our daily ministry is about healing the mind, body and soul,” said Father Ponnet. “We are gathered here because of relationships broken.”

Father Ponnet explained how one of his deepest wounds remains a time when he had to inform an accused priest that he had to leave. Father Ponnet later found out that the priest had abused one of his classmates at St. John’s Seminary.

“This goes deep in our hearts and our culture, and as a priest, we have the shame of what our fellow brothers and priests have done with broken lives and broken promises,” said Father Ponnet. “This is a rightful place for the diocese to have this healing garden space. Today I hope it’s also a healing place for priests and the shame we carry.”

One of the most poignant elements of the garden are the presence of two signs, in English and Spanish, on each side of the weeping wall.

“To you, who have been wounded by someone in our Church, who have had your innocence taken and your trust broken: I am deeply sorry,” reads the personal message from Archbishop Gomez visible to visitors. “We in the Archdiocese of Los Angeles want to walk with you and help you to heal. As you pray in this sacred space, please know that we, as Church, are praying with you. May you find hope in Jesus Christ, may the Blessed Virgin Mary be a mother to you, and may God give you peace.”