ROME — As the trial of 90-year-old Cardinal Joseph Zen opens in Hong Kong on charges of sedition, by now his boss, Pope Francis, has already been tried and convicted in a very different court, that of conservative public opinion, for the alleged crime of cowardice.

Critics are outraged that Pope Francis has not condemned China for the arrest of Cardinal Zen, nor has he expressed disapproval in other ways, such as backing out of a controversial deal with Beijing on the appointment of bishops.

Conservative writer Rod Dreher recently declared in The American Conservative that Cardinal Zen has been “betrayed by the pope who sold out the underground Chinese Catholic Church,” referring to the deal. In light of a delay in the opening of Zen’s trial, The Catholic Herald warned ominously that “Pope Francis has 24 hours to do the right thing,” adding that the pontiff needs to “make amends for his treatment of Zen.” This came on the heels of an editorial accusing Pope Francis of “kowtowing” to Beijing by refusing to denounce the trial and also wanting to renew the deal.

Perhaps the most common refrain is that Pope Francis simply does not “get” China.

Setting aside the question of who, exactly, does “get” China, the question du jour is how to explain Pope Francis’ discretion. As a starting point, it’s probably useful to allow the pope to speak for himself.

During a recent inflight news conference, Crux’s Elise Allen (my wife, so naturally I think it was a most brilliant question) asked the pontiff whether he considers the Cardinal Zen trial a violation of religious freedom. Here are the salient points of his reply:

“To understand China takes a century, and we do not live for a century. … In order to understand we have chosen the path of dialogue, open to dialogue. … It is not easy to understand the Chinese mentality, but it should be respected, I always respect this. … Understanding China is an enormous thing. But you do not have to lose patience, we have to go with dialogue.”

The key words, clearly, are “patience” and “dialogue.” 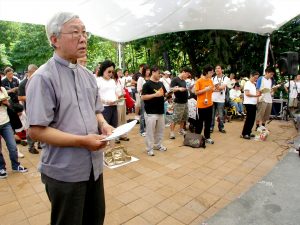 Cardinal Joseph Zen prays before a peaceful march by Christians in Hong Kong in 2008. (CNS/UCAN)

In the abstract, it doubtless is difficult for many people to understand how a pope could opt not to defend one of his own more fulsomely. Even in 1974, when Greek Melkite Archbishop Hilarion Capucci was caught red-handed by the Israelis smuggling Kalashnikov rifles, pistols, dynamite, and detonators to the PLO, the Vatican expressed “great sorrow” over his arrest. They haven’t even said that about Cardinal Zen, even though his only alleged crime is soliciting foreign support for pro-democracy protesters.

Pope Francis even seemed to distance himself from Cardinal Zen a bit in his reply to Crux, saying, “He says what he feels, and you can see that there are limitations there.”

So, what gives? Six points seem most relevant.

First, both the Vatican and China notoriously think in centuries. Both pride themselves in playing the long game, which is what Pope Francis seems to be trying to do. That approach may be frustrating, but it’s nonetheless part of the DNA of each party.

Second, Pope Francis is a Jesuit, which means he’s haunted by the ghosts of Father Matteo Ricci. It’s a historical commonplace to believe the Catholic Church made an enormous miscalculation by rejecting Father Ricci’s accommodating approach to the Chinese rites controversy in the 16th and 17th centuries, thus effectively closing the door to the evangelization of China, and no doubt Pope Francis is determined not to repeat that mistake.

Third, popes have to weigh the real-world consequences of whatever they say or do.

No modern pope can fail to remember what happened in 1943, after the Dutch bishops issued a pastoral letter criticizing Nazi anti-Jewish policies in the Netherlands. In response, all baptized Catholics of Jewish origin, including St. Edith Stein, were arrested and shipped off to Auschwitz, where the vast majority perished.

Pope Francis might earn some applause were he to blast Beijing over the Cardinal Zen arrest, but he has to weigh that PR benefit against what the fallout might be not only for the cardinal, but for the roughly 13 million Catholics in China.

Driven by displeasure over the pope’s China policy, in recent years Cardinal Zen has drifted ever more into the orbit of some of Pope Francis’ most strident critics. For example, he was a signatory to an open letter penned by Italian Archbishop Carlo Maria Viganò in May 2020 claiming the coronavirus pandemic was being manipulated to impose authoritarian modes of government around the world and lambasting the pope for endorsing government-recommended restrictions.

Granted, none of that means Cardinal Zen is guilty of sedition. Still, it’s part of the picture.

The plain fact of the matter is that those criticizing Pope Francis for his silence on Cardinal Zen are the same people who’ve opposed his papacy on multiple fronts from the beginning. Cardinal Müller, for instance, resisted the pope’s progressive line on the possibility of communion for divorced and civilly remarried Catholics in the document “Amoris laetitia” (“The joy of love”), to such an extent that he had to be removed as prefect of the then-Congregation for the Doctrine of the Faith.

It's human nature that when the people urging you to do X are among your worst enemies, you’re tempted to do Y instead.

Sixth, the Vatican may be giving China just enough rope to hang itself.

Think about it: What are the optics of a government that already has a reputation for authoritarianism threatening a nonagenarian with jail for no other offense than allowing dissent to be heard? Honestly, it’s hard to imagine a way in which China could make itself look worse, and, perhaps, the Vatican is already planning an appeal for a humanitarian release of Cardinal Zen should he be convicted. (They did that for Archbishop Capucci in 1977, and his offenses were far more serious.)

Whether any of this adds up to a defense of Pope Francis’ China policy is, of course, a matter of opinion. However, it is, at least, an attempt at explanation.