ROME — Let’s face it: By conventional measures, 2022 has not exactly been a banner year for the Catholic Church.

Over the last 12 months, the clerical sexual abuse crisis has continued to drain the Church’s resources and morale, defections from Catholicism have continued across much of the developed world, the pope’s attempts at reform in the Vatican have continued to raise as many questions as answers, and painful political and theological divisions have continued to pit Catholic vs. Catholic. In addition, from Hong Kong to Nigeria and Eritrea, the persecution of Christians, including senior Catholic figures, has continued apace with no end in sight.

Truth to be told, for much of 2022 it’s been difficult to pick up a newspaper or turn on the TV without finding yet another distressing narrative.

Yet here’s the thing: Across more than 2,000 years of Church history, no matter what random moment in time we might choose, in that instant there was both a case for despair and a case for hope. So it was again in 2022, because for those with eyes to see, there was actually plenty of good news, too. Here are five storylines about Catholicism to prove that point.

When Pope Francis made a brief, relatively uneventful trip to Malta in April, one of his hosts was a 90-year-old Franciscan priest named Father Dionysius Mintoff, founder and leader of an institution called the “John XXIII Peace Lab” in Malta, which today welcomes migrants and advocates for social justice.

The sight of the then-85-year-old pontiff embracing the 90-year-old Father Mintoff, and then the two of them shuffling off to greet a swarm of migrants and refugees, was among the iconic papal images of 2022.

Father Mintoff is a living symbol of the way in which thousands of Catholic religious, both men and women, quietly pour out their lives in service.

Consider Benedictine Sister Pierre Vorster, who turned 100 this past March. She’s been at St. Scholastica Monastery since 1937, when she was 15 years old, and has educated three generations of young women. Vorster was also instrumental in launching “Project Compassion,” which ensures that people visit the elderly in area nursing homes.

In Sri Lanka, Carmelite Sister Mary Theonilla also celebrated her 100th birthday in December. She took her vows 75 years ago, and has devoted her life to serving cancer patients, feeding the hungry, and ministering to victims of armed conflict, and insists that through it all she’s felt “the love of God in abundance.”

All around the world, typically with no fanfare either expected or desired, these legions of Catholic religious put the Gospel into action, day in and day out, and they keep doing it for their entire lives. They may not make headlines, but they certainly shape history. 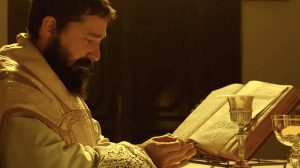 Despite all the negative publicity surrounding Catholicism in 2022, it was also a good year for depictions of the faith in popular entertainment.

Actor Mark Wahlberg, for example, starred in the biopic “Father Stu,” based on the true story of Father Stuart Long of the Diocese of Helena, Montana, a former boxer who converted to Catholicism and became a priest. Long contracted a rare progressive muscle disorder and died in 2014. As his condition worsened, people would flock to the long-term care facility where he was living so he could hear their confessions and minister to them there.

Also this year, actor Shia LaBeouf played the role of Padre Pio in a film of the same name, directed by the veteran filmmaker Abel Ferrara. Although the movie drew only mixed reviews, so moved was LaBeouf by the experience, which included living for a time in a Capuchin friary to prepare for the role, that he converted to Catholicism.

Even in England, where mocking Catholicism can sometimes be a popular indoor sport, 2022 gave us the BBC series “Sister Boniface” about a fictional crime-fighting nun with a Ph.D. in forensic science. She’s a devout Catholic believer who finds no difficulty reconciling her faith with her commitment to empirical science, and her cheery disposition makes her beloved.

In other words, even at a time when “Catholicism Inc.,” meaning the institutional expression of the faith, may be at a low ebb in terms of public confidence, the lives of individual believers, whether real or imagined, still commanded respect and affection this year. 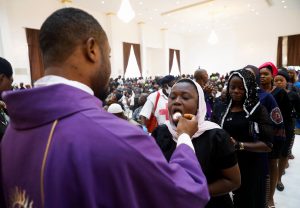 A woman receives Communion during a funeral Mass in the the parish hall of St. Francis Xavier Church in Owo, Nigeria, June 17. (CNS photo/Temilade Adelaja, Reuters)

Perusing the news, you might think the dominant Catholic storyline of the day is contraction. The headlines about formal defections from the faith in Europe, the mounting numbers of ex-Catholics in the U.S. seem to paint a grim picture.

In reality, 2022 confirmed that the exact opposite is true: Seen in global perspective, the dominant story isn’t decline but significant growth.

In February we got the numbers for 2020, the last year for which reliable statistics are available. They showed that Catholicism added 16 million news members that year — more than the entire Catholic population of Canada. Today, Catholics represent an impressive 17.7% of everyone on earth.

The vast majority of this growth is outside the western sphere. The Catholic population grew in Africa and Asia in 2020, by 2.1% and 1.8%, respectively. The share of the world’s Catholics who live in Africa has been climbing steadily over recent decades. Africa alone shot up from 1.9 million in 1900 to 130 million in 2000 and an estimated 236 million today, representing almost 20% of the global total. To take just one example, the Philippines alone recorded the most Catholic baptisms in the world with 1,603,283, considering both children and adults.

The bottom line is that Catholicism isn’t getting smaller, even if its center of gravity is shifting, and 2022 proved that its global growth isn’t over.

The Church and the desperate

Back in January, a picture by an Italian photographer went viral after winning an international photography competition. It depicted a 5-year-old Syrian boy named Mustafa, born without limbs due to a developmental problem during pregnancy, apparently caused by his mother’s inhalation of chemical weapons during an attack by government forces during the Syrian Civil War, along with his father, Munzir al-Nazzal, who also lost a leg during the conflict.

In the shot, father and son are playing and laughing, making it a heart-rending image of the power of love to overcome even the most awful forms of adversity.

What makes the photo of Catholic interest is that it was taken in Siena, Italy, where Mustafa and his entire family had relocated after being rescued from a refugee camp in Turkey by a variety of civil organizations led by the Archdiocese of Sienna-Colle and the Catholic charity Caritas. The family is now living in an apartment provided by Caritas while traveling to the Vigoroso Prosthesis Center, near Bologna, for the necessary medical treatment.

Mustafa’s story is emblematic of the way that throughout 2022, as in so many other years, the Catholic Church has been by far the largest and most committed provider of humanitarian relief to migrants and refugees. From the U.S.-Mexico border to the migrant corridors between Poland and Ukraine, and in so many other places, the Church stands on the peripheries and reaches out to those in need.

Throughout 2022, Caritas, the global Catholic charity, served countless millions of migrants, refugees, and internally displaced persons in the most disparate settings — Rohingya refugees in Bangladesh, for instance, and Venezuelans fleeing their country’s meltdown in Brazil, Colombia and Ecuador, as well as in Pakistan, where rains and flooding displaced 33 million people.

Whatever pundits or intellectuals may say, the world’s most desperate people generally experienced the Catholic Church in 2022 as a massive force for good.

The Church in Ukraine 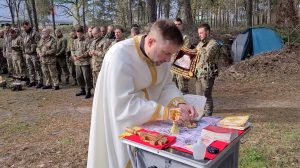 Father Rostyslav Vysochan, a military chaplain, celebrates a Divine Liturgy with soldiers in an undisclosed location in Ukraine in June. (CNS photo/Voznyak Production)

When Russia began its invasion of Ukraine on Thursday, Feb. 24, massive airstrikes forced the population of the country’s major cities into makeshift bomb shelters, including subway and sewer tunnels. Three days later, Major Archbishop Sviatoslav Shevchuk of Ukraine’s Greek Catholic Church released a video message to his flock, with a simple message.

Don’t worry about missing Mass this Sunday because of curfews and air raid sirens, Archbishop Shevchuk said. We’re coming to you.

He announced that priests of the Greek Catholic Church would fan out throughout the country’s bomb shelters, offering the Divine Liturgy to whoever wished to take part, while also ministering to the sick, the wounded, and the needy.

“The Church is with its people!” the archbishop said. “The Church of Christ brings the eucharistic Savior to those who are experiencing critical moments in their life, who need the strength and hope of the Resurrection.”

Flash forward to early December, with Auxiliary Bishop Jan Sobilo of Zaporizhzhia traveling to the front lines once a week to bring food and medical supplies to those most in need, saying that he can’t stay in any one place for more than about five minutes because Russian forces will begin firing in an effort to intimidate him. Yet Bishop Sobilo keeps coming, telling Catholic News Agency that “those who die show us that love always wins.”

Ukraine’s Greek Catholic Church has extended its mobilization even outside the country’s borders, setting up a welcome center, for example, in the Polish city of Przemysl to provide temporary relief for the millions of Ukrainians who’ve fled across the border since the fighting broke out.

Ukraine’s Greek Catholic Church is the largest of the 23 Eastern churches in communion with Rome, and, over the centuries, it’s earned a reputation for sharing the fate of its flock. It was the most martyred church in the world in percentage terms during the Soviet era, and again today it’s paying a price. In mid-November, two Greek Catholic priests were arrested by Russian forces in southeastern Ukraine and, according to Archbishop Shevchuk, are being “mercilessly tortured” to extract coerced confessions.

The Greek Catholic Church is not alone in its heroism. Clergy and laity of Ukraine’s Orthodox churches, as well as followers of other faiths and people with no religious affiliation at all, have also put their lives on the line to stand with the victims of the conflict.

Yet for Catholics, the example of their confreres in Ukraine packs a special punch. If despite all its woes and malaise, the Church can still inspire such courage and fidelity, then there’s hope for us all — and if that isn’t a dose of good news from an otherwise bleak year, what is?