Ukraine major archbishop responds to Russian invasion: ‘The Lord is with us’

God is always on the side of the victims of unjust aggression, the leader of the Ukrainian Greek Catholic Church said on Thursday, hours after Russian forces invaded Ukraine.

“It is our natural right and sacred duty to defend our land and our people, our state and all that is dearest to us: family, language and culture, history and the spiritual world,” he said.

The Ukrainian archbishop also emphasized God’s closeness to those who suffer injustice. 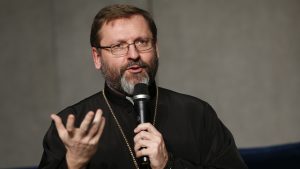 “We believe that in this historic moment the Lord is with us,” Shevchuk said. “He, who holds in his hands the fate of the whole world and of each person in particular, is always on the side of the victims of unjust aggression, the suffering and the enslaved.”

“It is He who proclaims His Holy Name in the history of every nation, captures and overthrows the mighty of this world with their pride, the conquerors with the illusion of their omnipotence, the proud and insolent with their self-confidence. It is He who grants victory over evil and death. The victory of Ukraine will be the victory of God’s power over the meanness and arrogance of man! So it was, is and will be!” the archbishop declared.

Russian President Vladimir Putin said in a TV statement early Thursday morning that Russia did not have plans to occupy Ukraine, and demanded that the Ukrainian military lay down its arms.

Both military and civilian deaths have been reported.

Shevchuk said Ukraine “is in danger again,” and said “the treacherous enemy” has broken the basic norms of international law, “stepped on Ukrainian soil, bringing with him death and destruction.”

“At this historic moment, the voice of our conscience calls us all as one to stand up for a free, united and independent Ukrainian State,” he continued.

“The history of the last century teaches us that all those who started world wars lost them, and the idolaters of war brought only destruction and decline to their own states and peoples.”

Fears that Russia was beginning a full-scale invasion of Ukraine were heightened this week after Russian President Vladimir Putin announced that he would recognize the breakaway Ukrainian regions of Lugansk and Donetsk as independent entities.

The eastern regions, which are run by Russian-backed separatists, include land currently held by the Ukrainian armed forces.

According to BBC News, on Thursday Russian military crossed into Ukraine not only from points on the Russian border, but also from Belarus, a Russian ally.

“This Church,” he said, “which has already survived death and resurrection, as the Body of the Risen Christ, over which death has no power, the Lord gave to his people in the baptismal waters of the Dnipro River,” he said.

“And in this dramatic moment, our Church, as a mother and teacher will be with its children, will protect them and serve them in the name of God! In God is our hope and our victory will come from Him!”

“Today we solemnly proclaim: ‘Our soul and body offer we for our freedom!’ With one heart we pray: ‘Lord, Great and Almighty, protect our beloved Ukraine!’”