For U.S. Catholics, Ukraine rescue missions come in many forms

Psalms have been the focus of Taras Tymo’s scholarship as vice dean of the theology faculty at Ukrainian Catholic University in Lviv, but he has discovered new depths in them as he helps the displaced persons flooding his city near the Polish border.

“The psalms are sometimes very brutal, and we never understood. We thought this was some kind of outdated Near Eastern thing that has to be explained away because Christians are too nice and refined to curse our enemies,” he said.

“But in days like this it becomes extremely necessary to be able to voice your outrage, your anger, your panic — all of your dark emotions — and to voice them in a way that is before the face of God.”

Such prayers echo through the Ukrainian diaspora.

In the kitchen of St. George Ukrainian Catholic Church in Pittsburgh, church ladies make thousands of pierogi — Slavic stuffed dumplings — with some proceeds providing body armor vests for Ukrainian soldiers. At a sister parish in nearby Carnegie, the pastor just returned from an emergency mission to Ukraine, where he and a parishioner rescued dozens of people, including 22 orphans. Every Tuesday he hosts a prayer service in Carnegie with the neighboring Ukrainian Orthodox priest, who remains frantic about the fate of three other orphans that he and his wife had been trying to adopt.

“Those multistory Soviet-style buildings are made of concrete blocks, and when they collapse, it’s like a house of cards,” he said. 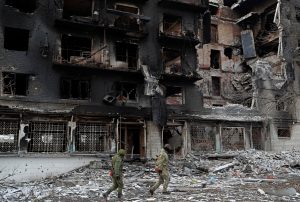 Pro-Russian troops in uniforms without insignia walk near a residential building destroyed in the separatist-controlled town of Volnovakha, Ukraine, on March 11. (CNS/Alexander Ermochenko, Reuters)

Though the Tymos’ house is always crowded with five children, they shelter displaced families who are on their way to becoming refugees. Tymo’s wife, an art historian, is working with a Swiss organization to protect cultural treasures. Their oldest son, 20, is collecting nonlethal supplies for Ukrainian troops — a project for which Tymo’s videos raise money.

“Everything is badly needed and every dollar converts to a saved life or a protected life,” Tymo said.

The next two eldest are Girl Scouts who volunteer at improvised transit shelters for displaced persons.

Lviv is ordinarily a loud, happy, city, popular with tourists. Initially after the Feb. 24 invasion it was unnaturally quiet. Then refugees began arriving by the hundreds of thousands, pouring from trains packed to triple their capacity, in which passengers had stood for 18 hours.

Some stepped off wearing little more than the pajamas they had on when the bombs fell.

Catholic organizations such as his own university, Caritas, and the Knights of Malta render aid and assistance. Most refugees are women and children. Men aged 18-60 must remain to defend Ukraine.

Tymo is grateful for American support, both spiritual and military. He asks everyone to keep reminding their elected officials in Washington of the need to support Ukraine.

“You will have to pay a price, probably at the fueling stations,” he said. “We understand that the world doesn’t owe us anything. You don’t have to do this, strictly speaking. On the other hand, we are not just protecting our own country. It is clear that [Russian President Vladimir] Putin will not stop with Ukraine. He is determined to destroy the whole security system, the world order that is not perfect — but is as good as we have ever had.” 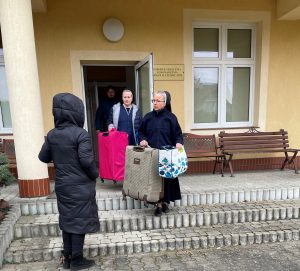 Sisters of the Servants of Mary Immaculate order in Poland help refugees at their convent. (Father Jason Charron)

Some Ukrainian-Americans are taking great risks to help. Shortly after the invasion, Father Jason Charron, pastor of Holy Trinity Ukrainian Catholic Church in Carnegie, went to Ukraine with one of his parishioners to rescue a 9-year-old girl that the parishioner intended to adopt. They emerged with a busload of 22 orphans and just as many other refugees, whom they took into Poland, across Slovakia and the Czech Republic, to Lithuania.

The parishioner, Pittsburgh businessman Allen Sherwood, had promised the child when she visited last Christmas that, if anything bad were ever to happen, he would rescue her.

When the tanks rolled across the border, “he flew into action,” Father Charron said.

Sherwood had never been to Ukraine and spoke no Ukrainian. Father Charron had taught English in Lviv, where he had met his wife, Halyna — Eastern Catholic Churches ordain married men. The Charrons have seven children, ages 2 to 21.

The orphanage director in Kyiv told them that, to rescue one child, they must take them all. So they did.

As they crossed the Polish border, the two Americans were almost the only people moving east while waves of humanity fled west. One of the few headed their way was Eliza, 24, who had earlier carried her 18-month-old from Kyiv to Poland after their apartment was bombed. At the border she handed the child to her husband, who works in Poland, then turned back into Ukraine to help the resistance.

“Mr. Putin does not have soldiers with that kind of fortitude and resolve. And it’s from those virtues that wars are won,” Father Charron said. 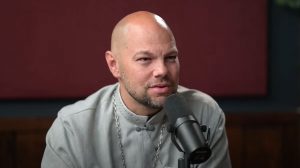 Father Jason Charron on an 2021 episode of "Pints With Aquinas" with Catholic podcaster Matt Fradd. (YouTube/Pints with Aquinas)

In Lviv, Father Charron and Sherwood found the 22 orphans and four staff members waiting in a 15-person van, in which they had traveled hundreds of miles.

Despite harrowing experiences, Father Charron said, the children were happy.

“It was a lesson for me that, no matter what you go through, there is always a choice of whether to be despondent or joyful,” he said.

Father Charron and Sherwood wrangled a 55-person tour bus, which they filled with refugees.

“If you don’t have a bus, you stand in line [at the border] for days. With cold temperatures, that really is in some cases as bad, if not worse, than staying home,” he said.

Catholic relief workers were highly visible. He was especially impressed with the Servants of Mary Immaculate, a Ukrainian order.

“They are the shock troops of the Church,” Father Charron said, describing sisters in blue habits, distributing food, blankets, and medical supplies.

In the rush to escape, the orphans had to leave their passports in Kyiv. It is currently impossible to bring any of them to the United States. That can come later.

“Our main objective was just to save all those kids,” Father Charron said. 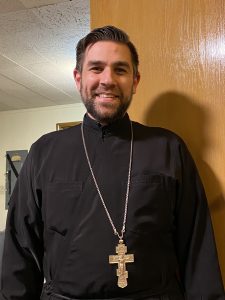 Not all such children can be rescued.

Father John Charest, a Ukrainian Orthodox priest with whom Father Charron alternates Tuesday night prayer services for Ukraine, is heartsick over three orphans in Kyiv whom he and his wife, Laryssa, have been trying to adopt.

The Charests met in college, when both volunteered at a Ukrainian orphanage. After their marriage, and continuing after the birth of their son Sebastian, 7, they began hosting Eastern European orphans on short-term visits.

Three years ago their hearts melted over two Ukrainian sisters, who turned out to have a younger brother. Their efforts to adopt all three have stalled for three years over the technicality that the siblings — now ages 10 and 13 — are in a foster home rather than an orphanage.

At St. Peter and St. Paul Ukrainian Orthodox Church in Carnegie, the Charests are organizing relief supplies and trying to stay in touch with the children. Bombs and rockets have come perilously close.

They had given the children a cellphone, telling them to text a daily minimum of one thumbs-up emoji. When that doesn’t happen, their hearts stop.

“Hours later, we will hear that they were in a [bomb] shelter where there is no service,” Father Charest said.

He has offered to pay the whole foster family’s way to Poland, to have a friend in Kyiv escort them out. The foster parents, an older couple, don’t want to leave their home for a journey that is also fraught with danger.

“I’m not there. It’s easy for me to make the right decision,” Father Charest said.

“They are in a terrible situation. The kids are frightened. They hear things they don’t fully understand. … If they can’t come to us, if we can’t adopt them, then at least they should go to a good home, out of that war zone.” 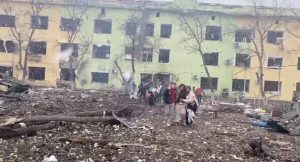 People are evacuated after the destruction of the children's hospital in Mariupol, Ukraine, on March 9. (CNS/Ukraine Military/handout via Reuters)

Father Ihor Hohosha, a parish priest and hospital chaplain in Pittsburgh, spent his childhood under Soviet rule in the 1980s, when the Ukrainian Catholic Church was illegal. His grandmother taught him to pray in secret, from a book that had been hand-copied because it could not be published legally.

Now 42, Father Ihor is among the oldest of Ukraine’s Catholic priests.

“The generation above me were all killed,” he said.

After World War II, Soviet dictator Joseph Stalin — who a decade earlier had engineered the starvation deaths of at least 3 million Ukrainians — forced the merger of the Ukrainian Catholic Church into the Russian Orthodox Church. Bishops, priests, nuns, and parishioners who resisted were killed or deported to labor camps. After Ukraine’s 1991 independence, however, millions of Catholics emerged from the shadows.

“Many of them were tortured,” he said. “I still remember one priest who was so beaten that only one of his lungs worked well. He never had enough air to speak and breathe at the same time.”

He sees little difference between the new Russian regime and old oppressors.

“This is genocide,” he said, citing the bombing of a maternity and children’s hospital. “I have no doubt that Putin is the new Hitler. This is Russian fascism.”

The fight is personal. His brother, who like Father Ihor is married with several children, had been an army reservist and has volunteered for active duty. He was given minutes to pack and say goodbye to his family. He now awaits deployment.

One of Father Ihor’s parishes, St. George Ukrainian Catholic Church, supports itself with an annual Lenten pierogi (or “pyrohy”) sale. Church members prepare thousands of the delicacies from a secret recipe handed down for generations. This year they upped the price by a dollar, with the proceeds for Ukrainian relief. Some go to humanitarian aid for civilians, some to buy protective gear for soldiers.

“This is not just war between Ukraine and Russia. This is between darkness and light, and we have to win,” Father Ihor said. “Maybe it looks like my country is being crucified, even sacrificed. I still believe in resurrection. I believe there will be a new start, a new beginning. After night, comes the sunrise.”