When Father John Maria Vianney arrived to the U.S. from his native India more than 20 years ago, the welcome he received was not always a warm one.

In one of his first assignments in the Archdiocese of Los Angeles, an “all-English-speaking parish,” he recalled the day his new pastor showed him the cleaning supplies used in the restrooms.

“People love seeing you clean the toilets on Sunday,” Father Vianney remembered the pastor telling him.

“I thought when I left India, I was escaping from the caste system in India,” said Father Vianney, now pastor of Miraculous Medal Church in Montebello. “And then I come here … and you end up with another challenging time.”

Father Vianney’s experience was one of several shared at the annual Presbyteral Day gathering Sept. 26, where priests serving in the Los Angeles Archdiocese spent an afternoon reflecting on racism in the Church.

The Archdiocesan Task Force on Racism, formed last year by Archbishop José H. Gomez, led the reflection. The LA task force is similar to those formed in other California dioceses as part of a statewide initiative launched in 2020 by the state’s Catholic bishops.

“I don’t think you have much to fear from most Catholic people,” when it comes to addressing the sin of racism, task force coordinator and pastor of St. Patrick Church in South LA Msgr. Timothy Dyer told the nearly 500 priests gathered in the Cathedral of Our Lady of the Angels conference center. “I think most of our Catholic people will respond well to a conversation that begins in prayer, self-reflection, and a lot of listening.”

Father Richard Vega, pastor of St. Frances of Rome Church in Azusa, spoke about the discrimination he faced dating back to his time as a seminarian for his skin complexion — despite being born to American parents of Latino descent in Southern California.

“As I went forward, one of the things I recognized is that for some I’m too brown, for others, I’m too white,” said Father Vega of his first years of priesthood. “The reality is I straddle two worlds. For some, the skin tone indicates one style of life. For others, a very foreign way of life.”

Cynthia Jones-Campbell of Padre Serra Church in Camarillo was joined by her pastor, Father Patrick Mullen, as they explained how the upheaval that followed the George Floyd protests in the summer of 2020 led them to work together and form a racial justice task force.

“Anger can change minds and hearts, but sometimes it entrenches them,” said Father Mullen, recalling the mood of those months.

Parishioners initially met via Zoom to talk freely about the challenges of the moment, including raising their families during the time of heightened unrest and strained race relations.

“We weren't content at the end that we had done enough,” Father Mullen said. “So we began a whole series of opportunities for parishioners to open their minds and hearts.”

The anti-racism work at Padre Serra is ongoing, Father Mullen explained, and Jones-Campbell now serves on the archdiocesan task force. 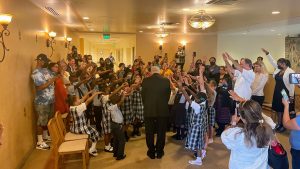 With Msgr. Dyer’s guidance, the task force gave priests an action plan aimed at helping them work for racial reconciliation in their parishes, through education, dialogue, and group prayer.

To date, 15 “pilot parishes” throughout the archdiocese have worked with the task force to begin racial justice ministries; there are also seven Catholic elementary schools participating in a pilot program.

At the end of the Presbyteral Day meeting, several dozen students from four local Catholic schools surprised the priests on the conference stage by leading them in singing songs of healing and unity, including “We Are the World,” a bestselling anthem originally produced as part of a 1985 all-star celebrity effort to raise money for African famine relief.

Afterward, Msgr. Dyer introduced the children to Archbishop Gomez outside the conference center and led them in a special prayer and blessing for his ministry.

Some of those offering reflections expressed hope that the Gospel can help Catholics transcend racial prejudices and differences.

Father Tesfaldet Asghedom, pastor of Sacred Heart Church in Lincoln Heights, came to the U.S. from his native Eritrea to study for the priesthood in the early 1980s. Despite various experiences of racism, he said he felt welcomed by Black Catholic and Latino communities in Los Angeles and other parts of the U.S., where he served as a Combonian missionary before eventually becoming an archdiocesan priest in Los Angeles.

He compared God’s command to Moses in the book of Exodus to remove his sandals on sacred ground to his experience ministering to different ethnic communities and parishes.

“For me the African American, the Hispanic, the Asiatic, the Anglo, the African … are holy grounds that need my respect and attention, when they allow me to enter their holy ground,” said Father Asghedom.