After a Catholic call to action on racism, these LA first-graders go first

Amid squeals and laughter, Kneshell Henderson smoothly guides a group of young schoolchildren — mostly 6-years-old — through a discussion of that most destructive of societal diseases: racism.

Racism, of course, is fed by fear, which is itself nourished by ignorance, so she has the kids — from two different schools, and of multiple races and cultures — examine, discuss, and draw together their similarities and differences, their dislikes and likes, the latter including cats, and pizza for breakfast.

They raise their hands and beg to be called on, they shout when asked to answer in unison, all of it with a familiarity that suggests they’ve been friends for years, when, in fact, they met barely two hours before.

“I love what I’m hearing!” Henderson said in the auditorium of Transfiguration Elementary School in Leimert Park. With a mural of Martin Luther King Jr. above her and the children, she tells them that what makes them unique from one another is something to be celebrated.

“We get into differences and how we are the same,” she said. “I want them to understand that everyone in the world might not be kind to them, but I still want [the children] to show kindness. It’s OK if everyone doesn’t like you. Do you like you? God made you special in the skin you’re in; don’t let anybody change that feeling.”

She does it so well that it’s easy to lose sight of the fact that Henderson, who teaches first grade at Transfiguration, has never done this before. This is all rather new to her. It’s new to everyone. 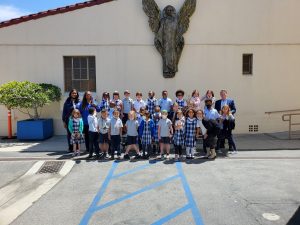 When the Archdiocese of Los Angeles launched the Anti-Racism Task Force in the fall of 2021, it did so with a desire to avoid grand statements in favor of consistent action. When the task force contacted Evelyn Rickenbacker, principal of Transfiguration, and Neil Quinly, principal of St. Monica Elementary School in Santa Monica, about being the first schools to get involved by getting their first-grade students together, they expressed interest but made clear what they did and did not want.

“Neither Evelyn nor I are interested in investing time in something that isn’t looking to do something,” Quinly said. “We felt a very clear directive; this isn’t about talking, this is about action.”

The first action this day was greeting the St. Monica kids with Transfiguration’s award-winning drum line. But kids being kids, they kind of took over the morning’s agenda, and introductions, immediately.

“When the [students from St. Monica] came in today, the girls noticed right away that they were all wearing the same uniform,” said Rickenbacker, who admitted she wasn’t aware the two schools shared similar school colors and uniform patterns. “They were saying ‘You have the same dress as me!’ It started just like that, a connection with someone you’ve never met before.”

The ease with which children make those connections was one of the reasons the first-graders were chosen by the school principals, in concert with Racism Task Force Director Msgr. Tim Dyer, to take part in this exchange.

“I remember when I was a young priest, I saw two little kids, one Black, one Mexican, holding hands, swinging their arms up and down, just so happy,” Dyer said. “I remember looking over, tears running down my face, thinking ‘Who’s going to tell them?’ I think kids have an easy way of coming together, of making friends, that not only allows us to help them, but helps us as an example of how freely they accept others.”

That was evident as the students paired up so quickly, that it was hard to tell where Transfiguration students began and St. Monica students ended; a mishmash of smiling faces, laughter, and arms draped around one another’s shoulders.

Still, being such open vessels also makes children vulnerable to whatever people pour into them.

“Hatred is taught,” Henderson said. “Until it’s taught to children, their natural instinct is to be open and accepting. If they’re not open, then you know their environment may not be the most open. In that case, our job becomes to unteach that.”

The Anti-Racism Task Force was charged by Los Angeles Archbishop José H. Gomez to address the “stain of racism” with a particular focus on the experience of African American Catholics.

Though they make up about 6% of the archdiocese, many African American Catholics will tell you that they often feel as if their faith is questioned, that they are not perceived as being “authentically” Catholic.

Evelyn Rickenbacker knows what that feels like. When she first moved with her family to Virginia, she asked locals where the nearest Catholic church was and was met with incredulity.

“They looked at me like ‘Why would you want to know that?’ ” 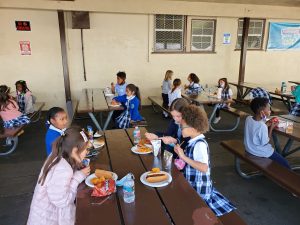 Rickenbacker attended Transfiguration as a child. Today, about 80% of its students are African American and its pastor, Father Anthony Bozeman, SSJ, is a member of the Anti-Racism Task Force.

“The fact that Black Catholics often feel that they are not important is a racism question in itself,” Rickenbacker said. “That’s why we wanted to welcome [the kids from St. Monica] with a drum line, to say this is who we are.”

And who they are was welcomed wholeheartedly and with open arms from their new friends at St. Monica.

“They jumped right in,” said St. Monica first-grade teacher Kate Kerkorian. “[Adults] would be so uncomfortable if thrown into this kind of situation, but kids jump right in with open hearts.”

Looking ahead, Quinly said he’s started thinking about developing a curriculum for Catholic schools inspired by that day at Transfiguration. Kerkorian said she’s already thinking of activities to follow up on this experience, including having her students journal about what they learned. She also thinks that she’ll have her kids follow-up with their new friends as pen pals.

She said she would like to “return the favor” and have the Transfiguration children over to St. Monica sometime soon.

“We definitely want to return the favor, so this is not a one-and-done thing.”