On the morning of Jan. 24, in the hall of St. Patrick Church in South LA — one of the oldest in Los Angeles — 13 people gathered under conditions familiar to any parish: pastries, nametags, small talk, and polite laughter, and when all sit down in the comfortable chairs arranged in a large square, the first thing they do is sing a hymn.

And when they were done with that, they got down to business.

The Archdiocese of Los Angeles’ Anti-Racism Task Force, focusing on African Americans, has been meeting once a month since last September, charged by Los Angeles Archbishop José H. Gomez to address the “stain of racism.” Similar task forces have been formed in other California dioceses as part of a statewide initiative launched in 2020 by the state’s Catholic bishops.

Perhaps the theme sounds a bit grandiose, but it’s a fight the members of this task force know well. They’ve dealt with racism both personally and publicly for years. They are aware of the countless like-minded, well-meaning groups and commissions that have come and gone before them, agreeing that racism is a problem, drafting a document, perhaps taking a group photo, and going on their way without much actually happening. 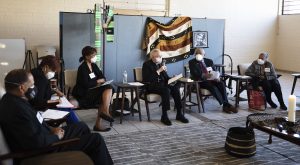 It fell to St. Patrick’s pastor and task force coordinator Msgr. Timothy Dyer to invite prospective members to participate. Most of the responses he got had something in common.

“I told Tim that I didn’t want to be part, I can’t be part, of something that is one-and-done,” said Sister Angela Faustina of the Sisters of St. Joseph of Carondelet. “This has to have a goal of producing a plan of action that is ongoing.”

Carl Cohn, former superintendent of Long Beach and San Diego school systems, agreed, saying that “unless this is rooted in the Church going forward, nothing of value will happen.”

Msgr. Dyer assured members that he “absolutely agreed this has to come with action.” Likewise, in his letter announcing the task force’s formation, Archbishop Gomez wrote that its members would engage in a “process of prayer, dialogue, and action,” that that process will lead not only to a “plan of action” but engage in the subsequent “work of implementation.”

Exactly what should be implemented, and how, dominated much of the meeting because, for the first time, Archbishop Gomez was among those gathered. 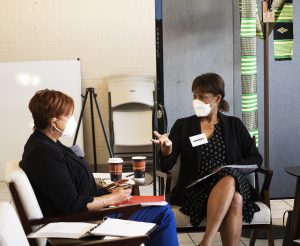 For nearly an hour, the task force’s members made their suggestions, their “Asks” of the archbishop, things they believed are necessary for real action. They talked about arranging for African American Catholics to tell their stories, and about how those stories would best be presented.

There were requests for the task force to have its own landing site on the archdiocesan website.

Sherry Hayes-Peirce, a social media strategist and parishioner at American Martyrs Church in Manhattan Beach, advocated for a better, stronger online presence. She believes in creating spaces for African American Catholics to tell their own personal stories, such as task force member Audrey Shaw’s heart-wrenching story of initially being denied Catholic baptism because of the color of her parents’ skin.

There are an estimated more than 50,000 African American Catholics in the Archdiocese of Los Angeles, making up about 6% of its Catholics. And yet they will tell you that their faith is often questioned or doubted.

Hayes-Peirce tells the story of being approached by someone who beamed at her and remarked, “You know, our converts are our strongest Catholics.” A bit stunned, Hayes-Peirce answered rather emphatically, “I am not a convert,” her story eliciting the pained laughter of recognition.

“There are times I try not to dwell on it, but I’ve met priests and parishioners who really doubt [African Americans] are authentically Catholic,” Shaw said. “I don’t know what they think we are? I’m a cradle Catholic, but the majority of people are shocked that I’m Black and Catholic. For them, somehow, those two things don’t go together.”

Still, many gathered didn’t believe it was the responsibility of African Americans to educate those people or to make the case for their own faith. As was repeated at the meeting several times, “This is not a Black problem.”

Rorrie Aubry pointed out that this is felt especially among younger Black Catholics who “don’t want to be validated.”

“They just want to be free,” said Aubry. “They want their concerns addressed from the altar which, many times they aren’t.”

Beyond any disagreements about what should be presented and how, everyone seemed to agree that ultimately, when an action plan is submitted in September, its success will be dependent on enlisting the support and energy of individual pastors to deliver the message, to set the example and to provide a long-term foundation for growth.

“If we don’t get the priests and pastors on board, we won’t reach the families,” Mgsr. Dyer said. 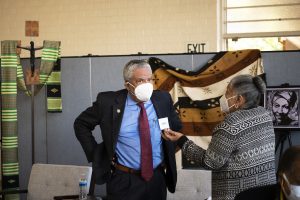 Aubry’s husband, Anderson, serves as director of the African American Catholic Center for Evangelization and is also on the task force. He suggested that pastors be asked to address the issue occasionally in a Sunday homily. Others suggested the archbishop’s involvement in the form of a letter or video message to reach parishioners.

Sister Angela, who heads the task force’s subcommittee on parishes, said that getting pastors involved means knowing their parishes first and not taking a one-size-fits-all approach.

That first step may be the biggest. Everyone at the meeting was handed a copy of Martin Luther King Jr.’s “Letter from Birmingham Jail,” in which King makes the case for nonviolent protest of racial inequalities, addressing his writing specifically to his “Fellow Clergymen,” who believed his efforts to be “unwise and untimely.” Similarly, members of the task force expect that some parishioners and priests may balk at the idea of discussing racism inside a church.

For those who believe the discussion of race is still incongruous to church time, Cohn suggested some additional reading.

“Read the Gospels,” he said. “Jesus was constantly using parables with regard to the outcast, those who at the time were politically seen as hugely problematic, whether Samaritans or whatever. Careful reading of the New Testament leads you to the notion that the Church should be engaged with what is going on in the world.

“I owe everything to my faith, to my Catholic education,” added Cohn, who once studied for the priesthood. “Even though my mission was in public school, everything was made possible by my Catholicism. I wouldn’t have accomplished anything in my life without it. That’s why this is so important to me, why I want to make sure that no one feels denied of that.” 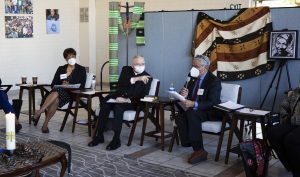 Sister Angela compared the resistance they expect to face among some faithful to the cross of Christ, an inevitability that must be confronted with faith.

“Some people don’t care, that's just the truth,” said Sister Angela. “But for a Christian not to care, they’re not a Christian. There’s no getting around it. There’s going to come a time when you need to make a choice, which direction are we going to go? That time is now.”

It was a message that clearly got across to Archbishop Gomez and Bishop Dave O’Connell, who himself served as pastor in the inner city for most of his priesthood.

“We are together, I am totally committed to this,” said Archbishop Gomez, who spent more than an hour listening to the group. “It’s very important, really a priority for me. You’re in my prayers every day.”

Quickly, Delia Johnson of St. Lawrence Brindisi, asked, “Will you come back?”

“If you invite me,” he answered with a smile.

It seemed clear that the invitation would be a short time in coming, just as clear that what is discussed at these meetings ultimately concerns everyone.

“Our purpose is not to condemn or accuse, we come looking to the future,” said Sister Eva Marie Lumas of the Sisters of Social Service. “How is racism manifested and how can we move forward with less of it? Whatever the future brings, we're going there together.”