When vandals taking advantage of local unrest in response to the death of George Floyd looted businesses in the affluent beachside city of Santa Monica on May 31, parishioners of St. Monica Church and their longtime pastor, Msgr. Lloyd Torgerson, went to work the next morning.

While parishioners helped clean up the damage done to restaurants and retail stores, Msgr. Torgerson walked the streets, stopping to talk to volunteers, and in some cases praying with them.

A week later on June 9, the day of Floyd’s funeral in Houston, Catholic churches around California rang their bells, prayed for racial healing, and offered Masses for the repose of Floyd’s soul.

But parishioners at St. Monica’s came up with an additional idea. That night, more than 200 people walked from the church to the place where Wilshire Boulevard meets the Pacific Ocean.

“Everything was happening so quickly, and we were hearing from people saying we needed to do more,” said Msgr. Torgerson afterward. “And they were right, we do. We always have to do more and we’re doing our best, but I’ll tell you, it’s tough.”

Gathered around the statue of St. Monica, they read the names of African Americans who had recently died as a result of police violence. 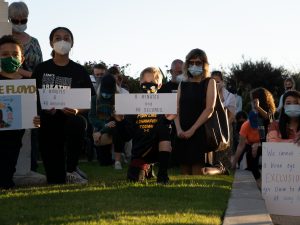 Then they knelt in prayerful silence for eight minutes and 46 seconds, the length of time that a Minneapolis police officer kept his knee pressed on Floyd’s neck, before he died.

Msgr. Torgerson said that as he knelt, he thought of his parish’s namesake, an African woman from Thagaste in present-day Algeria whose son, St. Augustine, went from being a confessed sinner to becoming one of the Catholic Church’s most influential thinkers. But he also thought of his 38 years in the city, and wondered if he had not been attentive enough to “the suffering of the black community.”

Initiatives like St. Monica’s come at a time when U.S. Catholic bishops and lay leaders have shown solidarity with peaceful protesters, and called on the faithful to “root out the racial injustice that still infects too many areas of American society,” in the words of Los Angeles Archbishop José H. Gomez.

“The protests we are seeing in our cities reflect the justified frustration and anger of millions of our brothers and sisters who even today experience humiliation, indignity, and unequal opportunity only because of their race or the color of their skin,” said Archbishop Gomez in his May 30 statement as president of the U.S. Conference of Catholic Bishops (USCCB).

“It should not be this way in America. Racism has been tolerated for far too long in our way of life,” he added.

Those familiar with the Church’s work in improving race relations in recent years say that while it has played an important role on a national and grassroots level, there remains plenty of work to be done. 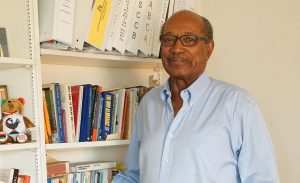 St. Monica fits the description of a majority-white, welcoming church that Anderson Shaw, director of LA’s African American Catholic Center for Evangelization, believes other parishes can learn from in confronting the problems of racism that affect not only society, but even in some cases the Catholic Church.

“One of the things happening is that Los Angeles has become such a melting pot, that we’ve lost the identity of a number of groups,” including African American Catholics, Shaw said.

Since Shaw’s days as a youth minister in the 1960s, the number of majority African American parishes in the Archdiocese of Los Angeles has dwindled to just a small handful, including Shaw’s home parish of St. Bernadette in Baldwin Hills.

Shaw’s ministry seeks to build community among African American Catholics in the archdiocese, hosting events such as the annual Black Catholic History Month celebrations each November. Shaw has long proposed that this should be celebrated in all parishes, not just ones where there are black people.

“We’re talking about the contributions of black Catholics to the Church as a whole,” said Shaw. “Everyone should know those.”

The demographic shift away from majority-black parishes is not necessarily a bad thing, but it’s something parishes need to be attentive to in their efforts to evangelize, Shaw believes.

“What happens to a lot of black Catholics [in parishes where they are a minority] is they become resource people to a limited number of people who ask them about their faith,” Shaw said.

On a broader level, the proverbial glass is “half full and half empty” when it comes to racial progress in Los Angeles, believes local radio host Earl Ofari Hutchinson, who is Catholic.

“The half full is we have in LA a true multiethnic city, with a true multiethnic political administration, and a police force that is multiethnic, with more layers of accountability,” said Hutchinson, who is president of the Los Angeles Urban Policy Roundtable, a civil rights and public advocacy organization.

But, he added, “the half empty is the gaping wealth inequality, abominable homelessness, and policing that still from time to time slips back into an ‘us vs. them’ mode that includes racial profiling and excessive force.” 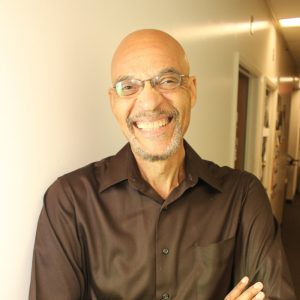 Catholics should be an important part of the grassroots effort to respond to those problems, Hutchinson believes.

“People of faith, that's true faith, do whatever they can to bridge and heal all gender, class, and racial divides, whether through dialogue, sharing, volunteering, giving, donating time and skills to the community.”

Los Angeles Auxiliary Bishop David O’Connell is one local pastor who knows what such efforts look like. He was serving at St. Francis Cabrini Church in South Central LA during the 1992 Rodney King riots, which resulted in heavy economic devastation and strained relations between law enforcement and minorities in the inner city.

In a June 4 interview with Catholic News Agency, Bishop O’Connell recalled how it took years for local religious leaders to develop a “level of trust” that “has helped us over many different crises over the last almost 30 years to be able to talk things through.”

“For all those years we were doing this in the ’90s, the early 2000s, we kept trying to convince people that we have to trust each other, you have to trust the police department, and convince the police how to deal with problems, de-escalate, respect people, build relationships, so that when conflicts happen, they don’t result in violence, and you can deal with things in a more humane way, a decent way, a civil way,” Bishop O’Connell said.

Now, with the Floyd protests resulting in more tense confrontations with local police, Bishop O’Connell worries about whether “the work that the community leaders have tried to do over the years is falling apart.”

“It’s harder now to go back and say, ‘Ok, we broke that trust, and now we want you to trust us again,’ ” said Bishop O’Connell. “ ‘It didn’t work last time, but trust us again next time.’ ” 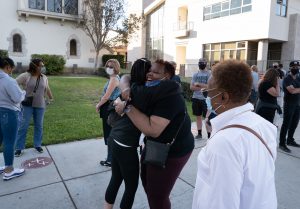 Among those who spoke at the St. Monica prayer vigil were two nurses at UCLA Medical Center who have spent the last months tending to coronavirus (COVID-19) patients.

Elkea Henry and Michelle Lawson are not Catholic, but decided to attend the vigil when a Catholic friend told Henry about it.

“It's moving, and this was very necessary,” said Henry, who ended up being one of those who spoke at the vigil. “And I feel like we did reach a lot of people today.”

Lawson said that as a mother of two black sons, watching the video of Floyd’s death, and his pleas for his mother, evoked strong feelings.

“My heart is broken and things have to change,” said Lawson. “So that’s why I am here, just expressing love.”

Henry said she’s seen up close how the current pandemic has “pulled the curtain” on many of the inequalities that are part of a wider problem locally, especially those in the health care system.

“Black lives do matter, all lives matter,” said Henry. “But we have to focus on what's really happening to a people, so we all can benefit — the rich, the poor, the essential workers, everyone.”

In the current climate, Shaw thinks believers have an “excellent opportunity” to foster a respectful yet productive dialogue on issues of racism and the use of police force: “All people of faith have a responsibility to support others who are facing these kinds of things.”