OneLife LA is an important tradition for the Mercado family.

Every year they make the 60-mile trip from San Bernardino County to the pro-life event sponsored by the Archdiocese of Los Angeles to celebrate their faith — and their son. As the festivities were in full swing, 15-year-old Gabe wrapped his arms around his dad’s shoulders.

It was a moment only made possible because his mom said no to abortion.

“His birth mother was a teenage girl who was struggling. We are just so blessed that she chose life,” said Rich Mercado, whose family attends The Holy Name of Jesus Church in Redlands. “I can’t imagine our family without him.” 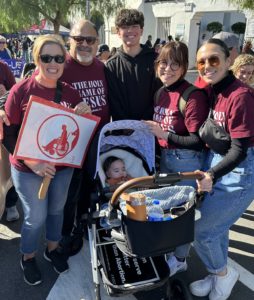 More than 7,500 people descended on downtown Los Angeles Jan. 21 for the event, organized by the archdiocesan Office of Life, Justice and Peace. They traveled by car, bus, and even train to support the dignity of life from conception to natural death at an important moment in the history of their cause: the first OneLife LA event since the overturning of Roe v. Wade by the U.S. Supreme Court last June.

Archbishop Gomez thanked the animated marchers — many of whom came in groups organized by parishes and ministries — for being part of this “spiritual movement.”

“What a joy it is to be alive, to believe in Jesus and to celebrate the gift of life,” said Archbishop Gomez. “We all want to live in a society where human life is cherished and welcomed, where everyone can live with dignity, beginning with the child in the womb and extending to every person in every condition.”

As the giant trail of people with banners and balloons wove through the streets, you could hear laughter, prayer and song but, sporadically, one voice rose above the fray. It belonged to Greg Perea, who came with his family — and a bullhorn.

“We’re loudly spreading the pro-life message but we’re making this a positive movement,” said a grinning Perea, a parishioner of St. John Paul II Polish Center in Yorba Linda. “We’re trying to show the world we’re all about love and peace and bringing others into the sheepfold.” 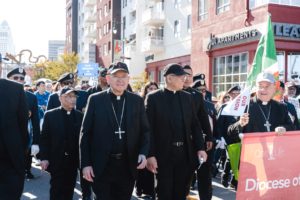 In his remarks, Archbishop Gomez said this year’s OneLife LA theme, “Our mission is love,” summed up the “single purpose” of our lives.

“Our mission is to radiate and to share God’s love in his creation … and when we know this it gives our lives beautiful clarity, a beautiful simplicity,” he said.

Both One Life and San Francisco’s annual pro-life rally, March For Life West Coast, as well as similar gatherings around the country, were celebrated on the eve of the 50th anniversary of the Supreme Court’s Roe v. Wade decision.

But because of the Dobbs v. Jackson Women’s Health Organization decision that overturned Roe and returned the matter of regulating or restricting abortion to individual states, participants like Dina Martins thought this year’s crowd seemed a “little more enthusiastic.” Still, she concedes, living in the Golden State can make some feel like a fish out of water.

“In California, we’re the minority. But you come out here and you’re not alone, you’re a part of something,” said Martins, a parishioner of Holy Family Church in Artesia. “When you see all these people here with the same message, it feels good.”

Bejarano, who also took part in San Diego’s Walk for Life event Jan. 14, said faithful shouldn’t get discouraged even after the passage of Proposition 1, the state ballot measure that enshrined the right to abortion in the California constitution. 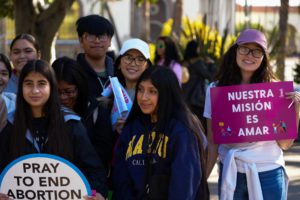 “Jesus never said it was going to be a piece of cake,” said Bejarano. “Don’t give up. Do your best. It’s not so much about whether abortion is legal or not…our mission is to show love and to show people there are better options.”

While abortion is still a “forefront battle,” there’s more to OneLife LA, said Michael P. Donaldson, senior director of the Office of Life, Justice and Peace.

“OneLife is all encompassing,” explained Donaldson. “We really try to focus on the fact that our human dignity is under attack, from homelessness, mental health issues, end of life care, to immigration. We need to rally together to witness to the sacredness of human life.”

The day’s speakers had those very topics in mind on the event stage. Attendees sat on blankets and lawn chairs to listen to powerful stories from people such as Mike and Penny Michalak from Louisville, Kentucky.

The Michalaks are the founders of Angels in Disguise, an organization that “celebrates the gift of Down syndrome” by supporting grants for adoption, heart surgery, and education. They also founded Immaculata Classical Academy, a Catholic school in Louisville that serves more than 200 children with and without Down syndrome. 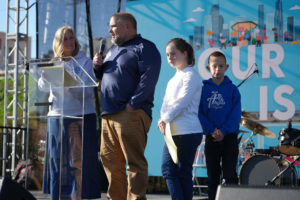 Mike and Penny Michalak and two of their children speak at OneLife LA Jan. 21, 2023. (Stefano Garzia)

But today, they had come to talk about their children. The Michalaks have 16 in total – 10 of them adopted, and four with Down syndrome.

While the chromosomal condition is often cited as a reason for abortion, the Michalaks spoke of the blessing that children like their son, Francis, have been to them. The 7-year-old was adopted from Poland along with his brother, Max, who passed away from a terminal condition related to blood pressure. Penny spoke of the legacy he left behind despite his short life.

“He died in my arms,” shared Penny from the event stage through tears. “It was the most beautiful, perfect way. God had a plan and I just needed to surrender to it. … He [Max] taught us to let go of our fear and live.”

Later, Ricardo and Modesta Pulido took the stage to chants of “stomp out the stigma” to talk about the challenges of raising two children with bipolar disorders. As Angelus first reported last April, the couple from St. Philomena Church in Carson has volunteered with the National Alliance on Mental Illness and the LA Archdiocese to support families affected by these issues.

“Everybody can have a full recovery, Amen!” said Ricardo. “Healing hearts starts with the Church, prayer and willpower. I’m so glad that the LA Archdiocese has opened up its doors to mental health ministry.” 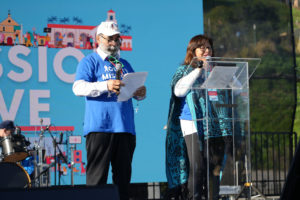 The day’s uplifting messages moved some in the crowd to tears.

“The speakers, their testimony, it’s been great,” said Artemio Sanguino of Sacred Heart Church in Lincoln Heights. “They all touched me in a way, they made me cry.”

This year’s recipient of the OneLife LA Service Grant was FosterAll, a nonprofit that partners with churches to help match children with foster parents who have a faith tradition. The organization’s executive director, Lou Moore, accepted the check for $10,000 from Archbishop Gomez.

Later in the afternoon, the archbishop celebrated the annual Requiem Mass for the Unborn at the Cathedral of Our Lady of the Angels. Some 3,000 people filled the pews to pray for the lives lost to abortion.

To spiritually prepare for the day, the archdiocese’s Office of Vocations hosted a Holy Hour at St. Joseph Chapel/Santa Teresita Medical Center in Duarte the night before, as well as a youth rally the morning of OneLife. Among the hundreds in the crowd, one tall young man stood out in his dark pinstripe suit. College student Grant Calderwood came by train from Santa Barbara. 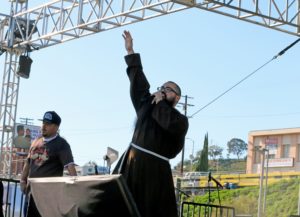 “I’m dressed up because I believe this is a very special event,” explained Calderwood, president of Students For Life, Santa Barbara City College. “Being part of the pro-life generation, I want to present myself well and turn people away from abortion and help them so they can have their babies.”

Father Isaac Arrieta, associate pastor at St. Rose of Lima Church in Maywood, came to the event with a strong mix of confirmation students, catechists and parishioners. He believes participation in events like OneLife are an important part of building a pro-life culture in his parish.

“We had two buses full of people!” said Arrieta. “In our confirmation classes, we talk to the young people about this topic…this was a way to show them it’s not just words, we’re here affirming our promise to protect life.”

Perhaps the big surprise of OneLife LA was when Father Victor Taglianetti (a.k.a. “Bro Vic”) started rapping on stage to a chorus of “Praise God that’s fa sho.” The Capuchin Franciscan  writes and records uplifting Catholic music. He said the message he was trying to get across to the crowd was simple.

“Sometimes people can be confused about their own worth and dignity,” he told Angelus later. “[God] does not desire your suffering or pain but desires your wholeness and well-being. My message today is God really loves you.”