After 43 years of marriage, Rick and Modesta Pulido are still counting the blessings their seven children have brought them. They speak of their time together with gratitude, but as any married couple will tell you, the experience hasn’t been without challenges.

Daughter Gracie, 38, and son Ricky, 31, have endured years of struggling with bipolar disorders. That illness took them to some dangerous places, including drug abuse and jail time. Then, last year, daughter Michelli passed away after a long battle with epilepsy at age 39. The family’s grief continues for the loss of the one they call their “little flower.”

And yet today, the Pulidos’ trials have led to their becoming a part of a burgeoning mental health care movement that’s reaching a growing number of Catholic parishes.

Advocates say it is a ministry in demand more than ever. The two years since the start of the COVID-19 pandemic have seen escalated cases of psychological distress, anxiety, fear, and depression on a global scale, and Southern California has been no exception. The pandemic has fueled addictions, disorders, and suicide rates, and with that a growing need for mental health care.

The Pulidos were all in.

It was a mission that the family’s years as parishioners at St. Philomena Church in Carson and as activists for mental health awareness had prepared them for. For the last 15 years, the couple has volunteered at local chapters of the National Alliance on Mental Illness (NAMI) peer support group. The group started with a 12-week class at Harbor UCLA Medical Center led by Paul and Nancy Stansbury, parishioners at American Martyrs Church of Manhattan Beach. 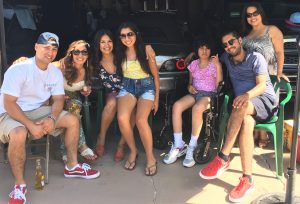 Their most recent “Familia a Familia” (“Family to Family”) group facilitation at St. Lawrence of Brindisi Church in Watts came at the request of pastor Father Matt Elshoff, who wanted to give parishioners a space for questions, listening, and tears to be shed. Similar sessions are in the works at other parishes, including St. Joseph’s Church in Hawthorne.

The couple said their ministry, which began in the early 2000s, was born out of the depth of their family’s suffering.

“At first, we were like many, just desperate for support — and my husband was also in deep denial about it,” said Modesta. “Everything has changed in our life now from this very strong experience. Through it all, I feel like we are not alone.”

Rick admitted that growing up in the Cypress Park area of LA forced him to have “super machismo,” but the 68-year-old now realizes his family was “in a super crisis.”

“To me, healing started when we asked Our Lady and Our Lord Jesus Christ to please intercede and bring us to the right place at the right time,” he told Angelus. “I am so proud of my children and happy to tell others that, if we can do it, you certainly can, but it takes time. Our NAMI Español classes are our therapy now in helping others.”

Today, Gracie has put her Penn State degree to a stable job and living situation, and son Ricky, with a Long Beach State degree, lives in Paris, a multilingual language teacher discovering his artistic talents. Gratitude is in order, their parents said, but so is “diligence and attentiveness.

“The archdiocese’s mental health ministry might be long overdue for some, but it’s also a perfect time to open the doors of our parishes for families in need,” said Rick. 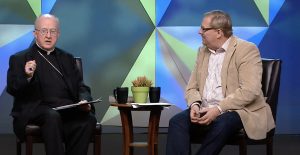 Bishop Kevin Vann of Orange and Pastor Rick Warren at a 2014 conference on mental health. (Screenshot via Youtube)

Since October 2021, the Office of Life, Justice and Peace has sponsored four Zoom webinars on various aspects of mental health. Participants heard from a variety of experts, LA county health officials, and clergy. More than 80 people from more than 40 parishes attended the first webinar, and attendance subsequently increased.

“It’s a topic that the Church realizes it cannot ignore and must look for ways to better accompany the faithful experiencing mental illness,” said Michael Donaldson, head of the Office of Life, Justice and Peace. “The stats tell us that one out of four or five adults experiences some sort of mental health issue — these include our people in the pews. For the Church to partner in mental health and to be present with this topic is so vital. It’s right in line with what we are called to do as missionary disciples.”

Donaldson remembered a pivotal point in the local church’s outreach to 2014, when his former boss, Bishop Kevin Vann of Orange, partnered with Saddleback Church pastor Rick Warren to host a conference on mental health. Later, in 2018, California’s Catholic bishops took the step of issuing a pastoral letter detailing how “ministering to those who suffer from mental illness is an essential part of the pastoral care of the Church.”

In Los Angeles, mental health has taken a place among the church’s top life-issue priorities.

This year’s OneLife LA speaker lineup included Ed Shoener, president of the Association of Catholic Mental Health Ministers. The deacon serving in Scranton, Pennsylvania, spoke about the life of his daughter Katie, whose bipolar disorder led to her suicide at age 29 in 2016. He later made himself available to attendees interested in possibly starting a mental health ministry at their local parishes.

Two months later, Shoener was at the LA Religious Education Congress in Anaheim for a mental health ministry presentation on suicide support.

“I was thrilled to be invited (to both events) and see Archbishop Gomez take an active leadership role in this,” said Shoener. “Sometimes just like life in the womb can be undervalued, sadly too often those living with mental illnesses can be undervalued and they can feel not welcomed in the Church.”

Another Catholic mental health expert welcomed at this year’s Congress was Tim Hogan, Ph.D., a Michigan-based relationship therapist and seminary instructor. His workshop focused on how to use Social Emotional Learning (SEL) to combat anxiety and stress, advocating it as “a strategy to revitalize parish culture.”

“I think brain science is rediscovering what the Church has been teaching all along,” Hogan told Angelus. “Brain science gives us more ‘street cred’ when we encourage spiritual disciplines, like prayer, meditation, deep breathing, eating meals together slowly, practicing gratitude, and cultivating authentic, vulnerable relationships.”

Father Marinello Saguin of Our Lady of Grace Church in Encino is one of the LA pastors giving mental health ministry his attention. Last fall, he asked the parish’s Director of Outreach and Social Ministry, Anisha Virgen, to attend last fall’s mental health webinars and share information with the parish.

Virgen found the sessions to be a crucial resource.

“For couples facing marital stress, for families dealing with economic challenges, and for a wide range of children and young adults feeling social isolation or suicidal ideation — the webinars and the practical training on how to build rapport, how to actively listen, how to furnish a safe space and foster trust were tools to help interact and respond to a large number of walk-in, unexpected interactions,” said Virgen, a Catholic convert who grew up Hindu.

“You’ve got to meet the people where they are hurting. We are starting to reconnect and refer based on having stability and staying connected. Having that kind of network is critical.”

Father Saguin, a Filipino American born and raised in LA who says he is an extrovert by nature, admitted he sought professional help during formation in the seminary because he came from a culture where mental health isn’t discussed.

“Some things can’t be processed alone, or be over-spiritualized either,” he said.

He said he personally saw family and friends struggle with depression and anxiety. As he came into his ministry, ordained in 2015, it was obvious there was more to be done.

“In the sacramental realm of reconciliation and pastoral counseling, when some were asking for confession, the more we talked, the more it was clear they carried not sins, but anxiety and uncertainty about how to try to soothe and combat that.”

Navigating cultural confusion in a place as diverse as Los Angeles is tricky, Father Saguin admitted. His own church has five different languages spoken. The answer, he believes, is in the style of personal “accompaniment” that Pope Francis speaks of frequently. 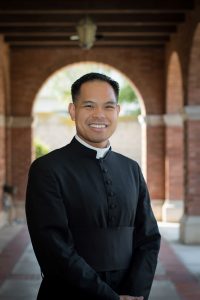 Father Marinello Saguin is pastor of Our Lady of Grace in Encino. (Courtesy image)

Virgen senses the COVID-related fears of some coming back to church aren’t going away soon, and the pandemic isolation has led to a deterioration in communications. But now, she feels, she has resources.

“Many will come and ask, ‘I need to see a priest,’ ” said Virgen. “But he might not be there because of mounting funerals and hospital anointing of the sick. Rather than send them away, having trained personnel to sit down and pay full attention, often in the adoration chapel — that was the way the training replaced a helpless sort of consternation.”

West of Encino, St. Julie Billiart Church in Newbury Park is considered a pioneer parish in mental health outreach. In 2019, Angelus spoke to psychiatrist Dr. Ed Jesalva, who helped launch a ministry together with fellow parishioner Leslie Lenko, who lost her 20-year-old son to an act of suicide from a bipolar condition.

During the pandemic, Jesalva and new pastor Father Ian Hagan have found the most effective way to keep the ministry in the forefront has been through a series of information pieces in the parish bulletin.

“That is a way to make things nonthreatening, a passive entry point toward understanding,” said Jesalva.

Jesalva believes that a pandemic-timed increase of medical prescription advertisements to treat mental health issues has opened the door to more confusion about side effects and their effectiveness. Unfortunately, he noted, that coincided with mixed information about the benefits of the COVID vaccine.

“A lot of myths can be propagated by the media, just as there are myths about psychiatry and how if you take medications you become controlled by them,” said Jesalva. “Once you explain it better, the setting of educating in your local church also brings a level of trust and support.”

As a result, when Jesalva holds his first in-person workshop since the pandemic on April 30, he will focus on explaining all the common medications used for those disorders. Adam Cross, host of The Catholic Therapist Podcast, will also discuss faith-related activities for coping.

To kick off Mental Health Awareness Month in May, the archdiocese is continuing its webinar series with Paul Brogan, MFT, a Catholic Encino-based marriage and family therapist, for a presentation titled “Caring for Our Youth: A Post-COVID Impact on Mental Health” on May 3.

Brogan noted there have been various inroads to addressing mental health through the archdiocese’s partnerships with Catholic Charities, St. Vincent de Paul, Retrovaille, and Engaged Encounter. He said it is important for the dioceses to host academic seminars that show “you’re not just spiritualizing away your problems, and making it look like mental health is just something in the secular world out there.”

In contrast to how those in underserved communities may have struggled for medical access addressing COVID treatments and vaccinations, Brogan said the archdiocese can use these webinars on mental health to give the disadvantaged a critical entry point for help.

At this year’s Congress, Brogan recalled an idea from a talk by Father Greg Boyle of Homeboy Industries, explaining the way he sees transformation happening as “when people feel safe, seen, and cherished.”

It’s a notion that can be applied to the conversation on mental health, Brogan believes.

“That is about finding out what they need and asking how one can help. I see this as a unique opportunity to say, ‘This is real, we have resources, and how can we serve?’ ”