Some 3,000 people packed the Cathedral of Our Lady of the Angels Saturday evening to pray for children lost to abortion at the annual Requiem Mass for the Unborn, the first since the overturning of Roe v. Wade last summer.

“As we know, our work for mothers and children and families has not ended. It is only changed,” said Archbishop Gomez, referencing the U.S. Supreme Court’s Dobbs v. Jackson Women's Health Organization decision in his homily. “We still need to work every day to build a city and nation where it is easier for people to be born and to raise families, where the strong help the weak, and the vulnerable are protected.”

The liturgy marked the final chapter of the daylong OneLifeLA event Jan. 21, which included a Walk for Life through the streets of the Chinatown area of Los Angeles and a pro-life festival with music, prayer, and speeches at Los Angeles State Historic Park. The outdoor event drew an estimated 7,500 pro-life advocates from around the state, many of whom traveled in groups by bus.

The Mass was celebrated on the eve of the 50th anniversary of the Supreme Court’s Roe v. Wade decision, the same weekend as similar pro-life rallies around the country. For pro-life Californians, LA’s OneLife and San Francisco’s annual Walk for Life (held on the same day) signaled ongoing resolve in the face of the passage of Prop 1 last November. The bill, which had the support of Governor Gavin Newsom and nearly 70% of state voters, enshrined the state’s wide abortion permissions into the state’s constitution and guaranteed a “right” to abortion until the final moments of a woman’s pregnancy. 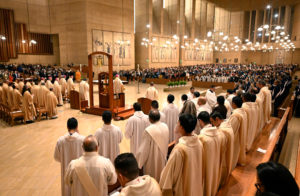 Some 3,000 people from around the state attended the Requiem Mass for the Unborn Jan. 21, 2023. (John McCoy/Angelus News)

Archbishop Gomez said the Requiem Mass was a moment to pray for those “who never had the chance to be born” but also “for a new awakening of love — in our hearts, and in the hearts of our neighbors.”

“This movement for a culture of life and love is about children and families and mothers and fathers,” said the archbishop in his homily. “It’s about the kingdom — the family of God that Jesus wants us to build with him on earth.”

Also present to honor the lives of the unborn at the service were interfaith representatives of local Buddhist, Mormon, Armenian and Serbian Orthodox, and Pentecostal congregations.

Before the end of the Mass, OneLife LA speaker Lauren Costabile was asked to share an anecdote from her work as the founder and executive director of Hearts of Joy International, a nonprofit that works to counsel pregnant mothers expecting children with Down’s Syndrome and provide surgery for children with the life-threatening heart defect often associated with the syndrome. 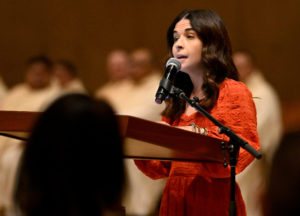 OneLife LA speaker Lauren Costabile, founder and executive director of Hearts of Joy International, speaks at the end of the 2023 Requiem Mass for the Unborn. (John McCoy/Angelus News)

“God has a plan for each and every life that he creates, and it’s such a beautiful gift that should be celebrated,” said Costabile.

Several participants carried large votive candles to be placed around the altar in memory of unborn children who lost their lives to abortion in Southern California last year. The cathedral lights were dimmed for a moment of prayer and remembrance for the preborn dead, and the candles were later placed in the cathedral’s colonnade to remain lit for a week, visible to all passing traffic on the 101 freeway.

20-year-old Maria Nieto was one of a bus full of youth and adults from St. Justin Martyr Catholic Church in Anaheim. She was reassured by the day’s large turnout, saying the crowds were a reminder that “I’m not one of the only ones supporting life.” 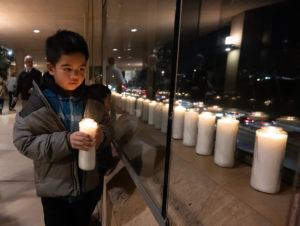 A young boy places a candle along the Cathedral colonnade overlooking the 101 Freeway in downtown LA after the Requiem Mass for the Unborn Jan. 21, 2023. (John McCoy/Angelus News)

“It’s really hard here in California,” said Nieto, currently studying child development at a local university, where she said “I don't feel free to express my beliefs and my opinions because I feel like everyone is just so pro-choice.”

Accompanying the parish’s young people was David Ramirez, a teacher at St. Bernard Catholic School in Bellflower and also the confirmation coordinator at St. Justin. He said the OneLife festival and Requiem Mass were an important answer to the ways young people are “influenced by society today through school and even social media to believe that aborting is a good option.”

“Instead, here we saw and heard that God loves each and every one of us that we’re all his children and that no matter what, we should love others as well,” said Ramirez.

And that, he said, was “a very, very good message” for his students to hear.