Tomb of Carlo Acutis is opened for veneration ahead of beatification

The tomb of Venerable Carlo Acutis was opened for public veneration Thursday ahead of the computer-programming teen’s beatification.

A spokeswoman for Acutis’ beatification told CNA that the entire body was present, but “not incorrupt.”

“Today we … see him again in his mortal body. A body that has passed, in the years of burial in Assisi, through the normal process of decay, which is the legacy of the human condition after sin has removed it from God, the source of life. But this mortal body is destined for resurrection,” Archbishop Domenico Sorrentino of Assisi said at a Mass at the opening of the tomb Oct. 1.

The bishop explained that Acutis’ body was “reassembled with art and love.”

Acutis, who died of leukemia in 2006 at the age of 15, was known for his computer-programming skills, and love of the Eucharist and the Virgin Mary.

The heart of Acutis, which can now be considered a relic, will be displayed in a reliquary in the Basilica of St. Francis in Assisi. His mother said that his family had wanted to donate his organs when he died, but were unable to do so because of the leukemia.

“Carlo is a boy of our time. A boy of the internet age, and a model of holiness of the digital age, as Pope Francis presented him in his letter to young people around the world. The computer … has become a way of going through the streets of the world, like the first disciples of Jesus, to bring to hearts and homes the announcement of true peace, that which quenches the thirst for the infinite that inhabits the human heart,” Sorrentino said.

The rector for the Sanctuary of Spoliation in Assisi, where Acutis’ tomb is located, told EWTN that reconstruction work on Acutis’ face was necessary before the public viewing of the tomb.

Acutis had brain hemorrhaging at the time of his death, and he offered his suffering for the pope and the Church.

“His body was discovered to be fully integral, not intact, but integral, having all its organs. Work was done on his face,” Fr. Carlos Acácio Gonçalves Ferreira said.

“In some way, his earthly face will be seen again. But that face -- let us not forget -- by now does not point to itself, but to God,” Archbishop Sorrentino said.

Acutis’ tomb is open for public veneration Oct. 1-17 in Assisi to allow as many people as possible to make a prayerful visit in the weeks before and after his beatification Oct. 10, despite coronavirus measures limiting attendance.

In his interview with EWTN, Ferreira lauded Acutis as a witness that holiness is attainable for teenagers.

In the tomb, Acutis is dressed in the casual clothes he wore in daily life. While he was not buried in this clothes, it is hoped that they will give evidence of the teen's life.

“For the first time in history we will see a saint dressed in jeans, sneakers, and a sweater,” the rector said.

“This is a great message for us, we can feel holiness not as a distant thing but as something very much within everyone’s reach because the Lord is the Lord of everyone.”

In the year before he died, the Italian teen researched Eucharistic miracles to create a website cataloging and sharing this information with others.

As part of the 17-day celebration of Acutis’ beatification in Assisi, two churches are hosting exhibitions of the Eucharistic miracles and Marian apparitions cataloged by Acutis.

Acutis’ tomb is in Assisi’s Sanctuary of the Spoliation, where a young St. Francis of Assisi is said to have cast off his rich clothes in favor of a poor habit.

“Carlo Acutis, like St. Francis, had in common, in addition to love for Jesus and in particular for the Eucharist, a great love for the poor,” Archbishop Sorrentino said as he announced Oct. 1 that a soup kitchen would be opened near the Sanctuary of the Spoliation in remembrance of Acutis. 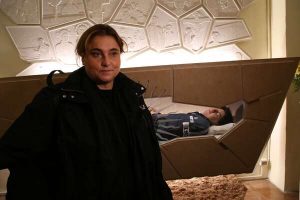 (Courtesy of Assisi diocese via CNA)

Carlo’s mother, Antonia Salzano (pictured above), said that she was very moved by the opening of her son’s tomb for public veneration.

“We are thrilled that finally Carlo’s tomb has been opened, especially because the faithful that Carlo has scattered around the world will be able to see him and to be able to venerate him in a stronger and more engaging way,” she said.

“We hope that through the exposition of Carlo’s body, the faithful can raise their prayers to God with more fervor and faith who through Carlo invites us all to have more faith, hope, and love for him, and for our brothers just as Carlo did in his earthly life. We pray that Carlo will intercede for all of us with God and obtain many graces for us.”