Carlo Acutis beatification will be a 17-day celebration in Assisi

Assisi is celebrating the beatification of computer programming teen Carlo Acutis in October with more than two weeks of liturgies and events that the bishop hopes will be an evangelizing force for young people.

“Now more than ever we believe that the example of Carlo -- a brilliant internet user who loved to help the least, the poor and the misfits -- can unleash a driving force for a new evangelizing momentum,” Bishop Domenico Sorrentino of Assisi said at the announcement of the schedule of events.

Beginning Oct. 1, the tomb of Carlo Acutis (pictured below) will be open for veneration for 17 days from 8 a.m. to 10 p.m. to allow as many people as possible to make a prayerful visit. Acutis’ tomb is located in Assisi’s Sanctuary of the Spoliation, where a young St. Francis of Assisi is said to have cast off his rich clothes in favor of a poor habit. 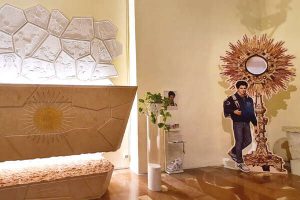 The Oct. 1-17 period of veneration is flanked by Masses in the sanctuary -- a fitting way to honor Acutis, who was known for his deep love for the Eucharist, never missing daily Mass and Eucharistic adoration. Churches throughout Assisi will also offer adoration of the Blessed Sacrament each day.

Two of Assisi’s other churches will be hosting exhibitions on Eucharistic miracles and Marian apparitions, subjects that Acutis had attempted to spread devotion to by creating websites. These exhibitions, in the Cathedral of San Rufino and the Cloister of the Basilica of St. Mary of the Angels respectively, will run from Oct. 2 to Oct. 16.

Acutis was aged 15 when he died of leukemia in 2006, offering his suffering for the pope and the Church.

The October celebration of his beatification will include several youth events, including a virtual gathering of Italian young people Oct. 2 entitled “Blessed are you: A school of happiness.”

A youth prayer vigil is also planned for the night before the beatification. The vigil, called “My Highway to Heaven,” will be led by Archbishop Renato Boccardo of Spoleto-Norcia and Auxiliary Bishop Paolo Martinelli of Milan, in the Basilica of St. Mary of the Angels, which contains the small church were St. Francis heard Christ speak to him from a crucifix: “Francis, go and rebuild my Church.”

The beatification of Carlo Acutis will take place at the Basilica of St. Francis at 4:30 p.m. on Oct. 10. The limited number of seats for this event have already been reserved. But the city of Assisi is setting up large screens in several of its piazzas for public viewing.

Cardinal Angelo Becciu was scheduled to offer the Mass, but on Sept. 24 news broke that he had resigned from his post as prefect of the Vatican Congregation of the Causes of Saints and from the rights of being a cardinal. It is not clear who will replace him.

With tickets to the beatification itself limited due to Italy’s coronavirus restrictions, the bishop of Assisi said he hoped that the extended period of veneration and numerous events would allow many people to be close to “young Carlo.”

“This boy from Milan, who chose Assisi as his favorite place, understood, also following in the footsteps of St. Francis, that God must be at the center of everything,” Sorrentino said.