Anyone who doubts the importance of myth and the need for heroes only has to watch what has transpired in Great Britain over the past couple of weeks to have those doubts dispersed like so many dandelion spores in a strong wind.

As a Catholic of Irish ancestry, I am in no position to offer an unbiased review of the reign of EIIR, but I can appreciate the connection to heroism that was her lasting legacy. Her father was a reluctant king inheriting a throne on the threshold of Britain’s greatest existential threat. He and his family represented a lot of heroic things to the people of Great Britain during World War II, and even though the vast majority of people living there now have little memory of those terrible times, there seems to be a long shelf-life for heroic deeds and the desire of people to cling to them, even if they are only stories they heard from their parents or grandparents.

But this is not about Queen Elizabeth II. It is about the power of myth and the heroes and heroines that populate them, and where to find them now.

In their golden age, major movie studios and the Disney Company were old reliables. They produced adventure movies where heroic characters performed heroic deeds in the face of tyranny, evil, or injustice. They did them with a certain panache too, with big budgets, big stars, and a lack of self-consciousness. Were they over-simplified versions of reality? Of course they were — that is what mythmaking is all about.

Those days may be gone, but thankfully, these films linger on dusty DVD shelves and floating through the ether of the internet just waiting to be rediscovered. We can no longer depend on the largess of major motion picture studios and certainly not the current manifestation of the Disney Corporation to produce films like they used to. The most tenuous dip into the Disney+ streaming pool and you will be up to your ankles in anti-heroes and protagonists so complicated and confused it would take half of the staff of the Johns Hopkins psychiatric ward to treat them. 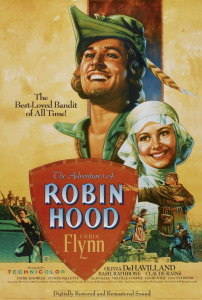 The movie poster for "The Adventures of Robin Hood." (IMDB)

Four years ago, I would not have cared all that much. I had my dust-covered DVDs to comfort me, and, with children who are passing as adults, I did not think I had a dog in this fight. I had run this race before, and it was other parents’ problems.

Four years ago, I did not have a grandson.

He has recently discovered the Marvel movies. I can see him respond, not to the double entendre, or to the “adult” dialogue and jokes, but to the action of heroes with unimaginable powers doing battle with bad guys. He does not have the staying power to sit through the “talking parts,” but I can see how entranced he has become of the action and good guys vs. bad guys themes. It is time to get my feather duster out and begin his education in myth and hero worship that points to higher things and not the least common denominator.

When he is ready, when I think he can sit through even all the talking before the action begins anew, I have a top three of films I hope he grabs onto and will not let go — or at least not let go until he grows in mind and body to appreciate these films, but desires to learn more about what true heroism looks like.

Since he crawled before he walked, and babbled before he spoke, I think starting with these three films will serve him well.

“The Adventures of Robin Hood”: 1938 seems so long ago, and it is. But this glorious film, the first big budget swashbuckler in the sound era, remains the gold standard. A perfect cast, Errol Flynn will forever be Robin Hood, and the storybook music, cinematography, and costumes may not have been historically accurate, but who cares? It is a film with a timeless quality with very strong underpinnings of justice, true love, and many other virtues that you aren’t going to find on today’s streaming universe.

“Prince Valiant”: Years ago, while working at a small Catholic college, a young dad colleague of mine, who knew of my addiction to old movies, asked me if there was a movie I could recommend for his then 5-year-old son, who was into adventure stories. He was worried even then for what passed for adventure movies. I loaned him my only copy of 1954’s “Prince Valiant.” Now, if you can suspend your disbelief and accept Robert Wagner in a pageboy wig playing a Viking prince, you will enjoy the film. My colleague’s 5-year-old fell in love with it. The young parents were also pleased to see the way Christianity was portrayed in the film. And it has a singing sword to boot!

“Captain From Castille”: This 1947 movie was must-see TV in our household when it came on the late show, mainly due to the fact its star Tyrone Power was our mom’s version of Brad Pitt. That being said, it is also a film made for the imagination of a boy. The issue of colonialism and conquest can be sorted out when boys get older, but this film has major lessons to teach about vengeance, contrition, and salvation.

For now, I bide my time, waiting for my grandson to reach the next stage of his life when these adventure tales will hold sway over him and he will turn every spent paper towel cardboard tube into a dagger and every trash can lid into a shield. With God’s help, and hopefully the influence of his elders, he will cast off the negatives in these films, stereotypes and treatment of indigenous people, but hold on to the more important elements of love, sacrifice, and faith in God — all truths that some myths can teach so well.