ROME – Despite the best efforts of nations around the world to isolate and punish Russia for its invasion of Ukraine, as of this writing the war grinds on, with Russian tanks encircling the capital city of Kiev despite unexpectedly stiff resistance from Ukrainian military and civilians alike.

The motives driving Putin’s war reflect a toxic blend of naked geopolitical ambition and conceptions of Russian nationalism, but it would be a serious analytical mistake to overlook the religious component of the conflict.

Putin sees himself as the great defender of the Orthodox faith on the global stage, and the conflict in Ukraine is, to some extent, a contest for what kind of Orthodoxy is going to prevail – the ecumenical, dialogic vision of Patriarch Bartholomew I of Constantinople, traditionally the “first among equals” in the Orthodox world –or the Kremlin-backed, anti-western Orthodoxy of Moscow?

If religion is part of the problem, then it seems natural to hope it can also be part of the solution. This explains why, from the beginning of the conflict, there’s been a focus on what Pope Francis and his Vatican team are saying and doing – or, in some cases, what they’re not saying and doing.

To be sure, Francis has made clear that the war has his attention. Aside from regular appeals for peace, the pontiff took the dramatic step Friday of exiting the Vatican for a short ride down Rome’s Via della Conciliazione to visit the Russian Embassy to the Holy See. That’s just not what popes do — when they want to talk to an ambassador, they summon them to the Vatican, they don’t go to them.

While the Vatican released no details about the visit, describing only as an expression of the pope’s “concern for the war,” it’s safe to say this wasn’t a courtesy call. Popes don’t go storming out of the Vatican in a moment of crisis just to say hello.

Francis also designated March 2, Ash Wednesday, as a day of prayer and fasting for Ukraine. He’s been in regular contact with Major Archbishop Sviatoslav Shevchuk, head of the Ukrainian Greek Catholic Church, who’s reported that Francis has assured him he’s doing everything possible to help. 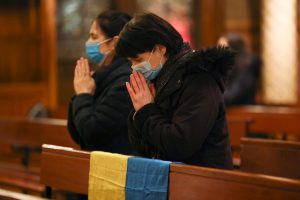 On the other hand, it’s now been several days since Russian forces rolled across the border into Ukraine, despite a personal pledge from Russian President Vladimir Putin shortly beforehand that there would be no war. Yet so far, Pope Francis has not named Russia in any of his public commentary as the aggressor, nor has he condemned Putin by name as so many other global leaders have.

That discretion is rankling many observers, naturally moved to sympathy for the Ukrainians.

Veteran Vatican-watcher Robert Mickens, writing in La Croix, asked some pointed questions about why the pontiff seems to be holding his fire: “Do the pope and his Vatican aides really believe that appeasing Russian oligarchs and hierarchs is their best strategy in advancing the cause of Christian unity?” he asked. “And on which altar are they willing to sacrifice the Ukrainian people to do so?”

How do we explain the apparent reticence?

For one thing, avoiding naming aggressors, and getting involved in public disputes with them, is more or less standard Vatican operating procedure.

In 2003, the Vatican under Pope John Paul II went to great lengths to avoid naming US President George Bush or publicly rejecting his actions, leaving just enough wiggle room that US officials could insist the Vatican never “condemned” Bush’s invasion of Iraq, despite the fact that Rome’s opposition was clear to everyone.

The most famous example of all, of course, is the fact that Pope Pius XII never directly condemned (or excommunicated) Adolph Hitler, once again despite the fact that the Vatican’s repugnance for National Socialism was obvious.

The logic for that discretion is two-fold. First, rash statements from the pope or the Vatican could actually make things worse for the people on the ground they’re trying to defend, unleashing retribution from the aggressor. Second, if the pope or the Vatican wants to engage in behind-the-scenes conflict resolution, sometimes biting their tongues in public is the price of doing business.

When it comes to Russia, Francis has a special motive for restraint.

It has been the policy of every pope since John XXIII to pursue détente with Orthodoxy, an effort that accelerated under John Paul II and his vision of a Christianity that “breathes with both lungs,” East and West. As a result, popes and Vatican officials are extraordinarily reluctant to do anything that might reawaken Russian suspicions that Rome is perennially hostile to Moscow.

At the moment, it still appears possible that Francis might be able to play a role in defusing the war. Ukrainian President Volodymyr Zelenskyy has said he’d welcome a papal mediation effort, even saying the Vatican would be a great place to sign a peace deal.

While so far Russia hasn’t sent up any signals of interest, if sanctions continue to escalate while the offensive bogs down and Putin is forced to find a face-saving exit strategy, taking up a papal invitation might just start to look good.

If so, perhaps the historical assessment will be that the Vatican’s discretion paid off. In the meantime, however, one can probably forgive the mounting impatience of many Ukrainians, who believe the time for discretion ended the moment Russian tanks rolled across their borders and Russian bombs started falling on their cities.