ROME — Among the throng of visitors who gathered in St. Peter’s Square on Sunday, March 6, for the pope’s weekly Angelus, many had come with prayers of peace and shows of solidarity with the people of Ukraine following the Russian invasion in late February.

And Pope Francis came with a surprise.

In a show of his support and that of the “entire Christian community” for the East European country, he announced that he was sending two of his closest aides, Polish Cardinal Konrad Krajewski and Canadian Cardinal Michael Czerny, to Ukraine.

Both cardinals play a key role in carrying out the pope’s social vision. As the “papal almoner,” Cardinal Krajewski essentially serves as Pope Francis’ charitable arm, while Cardinal Czerny headed the Vatican’s migration office for several years before taking over the Vatican’s Dicastery for Integral Human development a few months ago.

Cardinal Czerny first went to Budapest, where he met with refugees, before making his way to the border with Ukraine. Almost as soon as he’d wrapped up the visit, the Vatican announced on March 14 that the pope had asked Cardinal Czerny to return to Ukraine a second time, this time via the Slovakian border, to show Francis’ “closeness” to the suffering country.

Meanwhile Cardinal Krajewski told Crux that he sent the pope photos of what he was seeing while crossing the border from Poland into Ukraine.

Pope Francis has also made a point of staying informed by speaking to Ukrainian President Volodymyr Zelenskyy, the head of the Ukrainian Greek Catholic Church (UGCC), and even the Russian ambassador to the Holy See. On March 14, Vatican Secretary of State Cardinal Pietro Parolin revealed that Russia had “taken note” of the Holy See’s offer to mediate peace talks, but gave no indication that Russian President Vladimir Putin had expressed interest in the offer.

What’s becoming clear is that rather than be resigned to a passive vision of world affairs, Pope Francis seems ready to lead a new age of diplomatic and geopolitical leadership for the Holy See.

By now, Pope Francis has demonstrated how he wants to engage the world as a peace pope: He approaches conflicts in a uniquely spiritual fashion, relying on the resources of faith — prayer and fasting, invocations of the sacred texts of the world’s great religions, and popular devotions and religious observances. He sees this not only as the appropriate way for a pope to exert his influence, but also as good politics.

Many of the world’s bloodiest conflicts have a clear religious subtext, which means that a spiritual leader can engage them in a fashion that no secular diplomat could. In the case of Russia’s invasion of Ukraine, the Kremlin has had close ties with the Russian Orthodox Church, which has long seen the UGCC as a roadblock the Soviet Union failed to annihilate.

While Pope Francis clearly wants to deploy whatever influence he can to promote peace, he is selective about how, and how often, he wades into conflicts, and whose feathers he is willing to ruffle.

His first real test came over Syria, months after his election to the papacy. In August 2013, after President Bashar al-Assad’s regime was believed to have carried out a sarin chemical attack on opposition areas near the capital, Damascus, Western leaders tried rallying public support for the use of military force.

As the first pope from the developing world, Pope Francis feels a special responsibility to listen carefully to the “peripheries,” those places outside the usual Western centers of power. In the Syrian conflict, he was determined to hear from local Christian leadership. Christians are an important minority in Syria, composing about 10% of the population of 22.5 million. They were unanimous in their reading of the situation: Forcing Assad from power was a recipe for disaster. 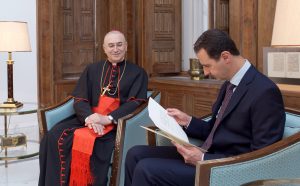 Cardinal Mario Zenari, the apostolic nuncio to Syria, looks on as Syria's President Bashar Assad reads a letter from Pope Francis during a Dec. 12 meeting in Damascus. In the letter, the pope urged Assad to do everything possible to end the war in his country, to protect civilians and to ensure humanitarian agencies can deliver emergency aid to the people. (CNS/SANA news agency)

As they saw it, if Assad fell, Islamic radicals would most likely fill the void. Even if most Syrian Christians are no fans of Assad, many believed that the alternative would be even worse.

Pope Francis made it clear that the crisis in Syria was a deep concern, making a point of praying for Syria on Easter Sunday weeks after becoming pope, and later leading a prayer service for peace in St. Peter’s Square.

Behind closed doors, Pope Francis asked for updates from Church officials on the ground. Even with other world crises percolating, the pope felt a special urgency to get involved because of the precedent of Iraq, where the Christian population was reduced to a third following the 2003 U.S.-led invasion. He was determined not to stand by while another Christian community in the Middle East suffered the same fate.

Throughout the process, he tried not to burn bridges in his public statements, avoiding naming Assad or even the other countries involved in the conflict.

Fast forward to Feb. 24, 2022, the day that Russian President Vladimir Putin’s invasion of Ukraine began. The pope has called for two days of prayer and fasting for peace, has spoken about the crisis on a weekly basis in the lead-up to the invasion, and sent public messages of support and prayer, including with the hashtag #PrayForUkraine on Twitter.

But, as many have pointed out, he hasn’t named Russia or its leader. This does not mean he hasn’t made direct appeals to the Kremlin. In fact, he first told Putin to seek “an honest and great effort to achieve peace” with Ukraine in 2015.

Now, his messages have gotten less cryptic as the violence worsens.

“Those who pursue their own interests to the detriment of others, scorn their human vocation, because we were all created as brothers and sisters,” Pope Francis said Jan. 23. “Those who wage war, those who provoke war, forget humanity,” he said Feb. 27, his first public appearance after the invasion began. On March 6, he directly challenged Putin’s euphemism for the invasion: “It is not merely a ‘military operation,’ but a war, which sows death, destruction, and misery.”

Popes have historically kept a window, if not a door, open for dialogue. Pope Francis’ increasing forcefulness in his appeals in favor of Ukraine represent the metaphorical hitch that is keeping the hatch from closing.

However, seeing that the war in Syria is still ongoing and those dialogue efforts long forgotten, in the Russian invasion of Ukraine the question becomes how can the Vatican actually open the hatch and how fast it can do so, because keeping it from closing won’t be enough.