Ukraine marks half a year of resistance and independence, but worries loom

As Ukraine approached its 31st year of independence Aug. 24, it did so while embroiled in a bitter fight for that freedom, as it hit the six-month mark of defending itself against a Russian invasion.

Archbishop Borys Gudziak, head of the Ukrainian Catholic Church in the U.S., used the occasion to thank U.S. Catholics and other people of goodwill for material and spiritual shows of solidarity as the nation fights to remain free from Russian control.

"I want to thank all of you for your solidarity: all Americans, all American Catholics, all people of goodwill. It is with your help that Ukraine is making this biblical stance (of) David against Goliath," he said in a recorded video message posted on YouTube Aug. 23.

"This is what independence means today for Ukraine," added Archbishop Gudziak, who heads the Ukrainian Catholic Archeparchy of Philadelphia.

And while Ukrainians remain defiant, some Catholic organizations sounded the alarm about the difficulties on the ground that have only increased since the Feb. 24 invasion by Russian forces. 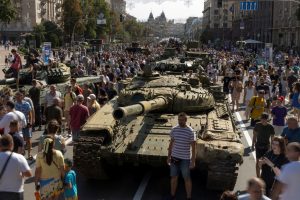 "The current state of stress is not sustainable -- not for Ukraine, not for its neighboring countries, not for the larger global community," said Sean Callahan, president and CEO of Catholic Relief Services in an Aug. 22 statement.

"I had a chance to visit Lviv this summer and saw the steps people have taken to protect their homes and communities -- lining their parks with sandbags, digging pits in case they have to defend their streets from invasion," he said. "It's devastating to know they've had to live in this constant stress."

Catholic aid organizations such as CRS, the U.S. bishops' overseas relief and development agency, as well as Cross Catholic Outreach have distributed aid from donations by U.S. Catholics, not just in Ukraine, but in neighboring Poland, Moldova, Romania, Bulgaria, Slovakia, Croatia, Bosnia and Herzegovina and Montenegro -- nations that have taken in Ukrainian refugees.

Some of that help has included financial, spiritual and other material assistance to families, as well as securing ambulances, generators, clothing and food for those affected inside and outside of Ukraine. Some also have been able to receive therapy through the organizations to deal with the trauma.

CRS, in its statement, said that "the war has created an extraordinary refugee and displacement crisis."

More than 11 million have crossed the Ukrainian border since the invasion began but as some of the fighting has decreased in other parts, nearly 5 million people have returned to remake their lives, even as the future is not certain, CRS said.

"The race is on to make those repairs now," said Conor O'Loughlin, CRS country representative in Moldova and Ukraine, according to the organization's statement. "The cost of living has skyrocketed in Ukraine putting enormous economic pressure on families. It's imperative that we do as much as we can now to make sure people are ready for winter."

The end of the conflict doesn't seem to be on the horizon anytime soon.

Archbishop Gudziak asked that, along with their prayers and help, people try to have a "correct understanding of what is happening" in Ukraine, saying it is a "struggle for the God-given right to be free, to live in dignity, to celebrate."

The story of Ukraine's fight for independence, he said, is "the story of the whole world."

On Ukraine's Independence Day, the Biden administration announced the U.S. would be sending $3 billion to Ukraine for arms and equipment as part of a $40 billion aid package that lawmakers approved earlier this year.

Ukrainian President Volodymyr Zelenskyy, in a recorded address to mark the country's celebration, said that "every new day is a new reason not to give up."

"Having gone through so much, we have no right not to reach the end," he added. "What is the end of the war for us? We used to say, 'Peace.' Now we say, 'Victory.'"

He recently faced criticism for not acknowledging that he knew Western intelligence warning of a Russian invasion was real just before the conflict began Feb. 24.

"If we had communicated that," the nation's economy "would have been losing $7 billion a month since last October, and at the moment when the Russians did attack, they would have taken us in three days," Zelenskyy told The Washington Post in mid-August.

And though some Ukrainians said lives could have been saved if Zelenskyy had shared the information, they also said this was not the time to deal with that controversy.

The country feared potential attacks on Independence Day, because Russia President Vladimir Putin has blamed Ukrainians for setting off a car bomb in Moscow that killed the daughter of a close associate.

Pope Francis continued to call for dialogue and said he was praying for peace to prevail amid the "insanity" of war.

"I think of the children, the many dead, and the many refugees of the war in Ukraine. There are so many wounded and many Ukrainian children and Russian children who have become orphans," Pope Francis said in his general audience Aug. 24.

CRS' Callahan expressed worries about the ramifications beyond Ukraine and its neighboring countries.

"We're very concerned about the long-term implications of this war," Callahan said. "It's already done immeasurable damage not only to the Ukrainian people, but also to so many countries that rely on Ukrainian exports. Our fear is that it will be years before those affected can recover from this."

The United Nations has said the conflict in particular will affect the poor in Africa, a continent whose nations rely on wheat and sunflower imports from Ukraine and Russia.

Millions of lives at stake as African nations deal with the economic repercussions of the coronavirus pandemic, drought and now a scarcity of staples produced by the conflict between Ukraine and Russia.

"While Africa is yet to fully recover from the socioeconomic repercussions of the COVID-19 pandemic, the Russia-Ukraine conflict poses another major threat to the global economy with many African countries being directly affected," the U.N. said in an early May statement.