In new comments to Italian media, the Vatican’s Secretary of State has said recent remarks by Russian Orthodox Patriarch Kirill will only make tensions in the Russia-Ukraine war worse, and said a second meeting with the pope is unlikely.

Speaking to Italian media at the close of an event called Sui Tetti, or “On the Rooftops,” March 9, Parolin said “Kirill’s words do not favor and do not promote an understanding.”

“On the contrary, they risk aggravating spirits even more and going towards an escalation and not resolving the crisis in a peaceful way,” he said.

In recent days, Kirill, who until recently has refrained from making any direct remarks in favor of or against Russia’s war with Ukraine, has delivered two sermons in which he departed from a neutral stance and conveyed a clear pro-Russia position in line with that of Russian President Vladimir Putin.

On March 6, when the Russian Orthodox Church observed “Forgiveness Sunday” before the beginning of their Lent, Kirill backed separatists in Ukraine’s eastern Donbass region and suggested that an unnamed western body of nations is organizing genocide campaigns against countries that refuse to hold gay pride parades.

On March 9, during the Lenten Liturgy of Presanctified Gifts, Kirill delivered another sermon in which he referred to Russians and Ukrainians as “one people” and accused the West of supplying Ukraine with weapons in a bid to weaken Russia out of a growing fear of how powerful Russia had become.

Held at the Pontifical University of St. Thomas Aquinas in Rome, also known as the Angelicum, the event Parolin spoke at was organized by the Pro Vita & Famiglia organization to mobilize Catholics in politics and the public sphere.

Asked by Italian journalists about a potential second meeting between Pope Francis and Kirill, which was rumored to take place sometime between June and July of this year, Parolin said, “The question is very complicated, also by the tensions that have existed between the Churches, so at the moment there has been no possibility.”

On the prospect of a future meeting, even if it is not organized this summer, Parolin said, “This situation is complicated. We’ll see.” 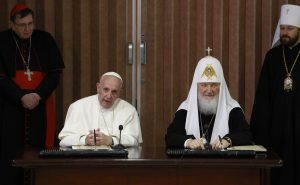 Pope Francis and Russian Orthodox Patriarch Kirill of Moscow attend a ceremony to sign a joint declaration during a meeting at Jose Marti International Airport in Havana in this Feb. 12, 2016, file photo. (CNS photo/Paul Haring)

Pope Francis and Kirill met for the first time in 2016 in Havana, Cuba, while the pope was on his way to Mexico. The encounter marked a historic milestone, as it was the first time a pope and Russian patriarch had ever met.

For months it has been rumored that a second meeting between the two would take place this year, however, it now appears that the Russia-Ukraine war, now in its second week, has thwarted these plans.

In his remarks, Parolin also spoke of his conversation Tuesday with Russian Foreign Minister Sergey Lavrov, which he said proved to be of little help in securing humanitarian corridors and negotiating an end to hostilities.

Lavrov, he said, “presented their point of view,” and “We also talked about humanitarian corridors, which was one of the requests made on behalf of the pope, to respect them, as well as the issue of respect for civilians in general.”

No “reassurances” were given on the establishment and security of humanitarian corridors for civilians who are fleeing the conflict, he said.

In terms of whether there is still room to negotiate and to end the war, Parolin said, “I hope so because otherwise there is no possibility that this war will end in a negotiated manner; certainly the margins are very tight, but the hope is that we can reach a negotiated position.”