Doubt can be a step toward deeper faith, pope says

Even the most fervent believers go through moments of doubt and questioning about God, and it is a good thing, Pope Francis said, because it helps one see that God does not fit into the little box people make for him.

Doubt "helps us understand that God is always greater than we imagine him to be. His works are surprising compared to our calculations; his actions are different, always, they exceed our needs and expectations; and therefore, we must never stop seeking him," the pope told people joining him for the Angelus prayer Dec. 11.

People face a constant "temptation: to make ourselves a God to our measure, a God to use," the pope said. But "God is something else."

Pope Francis spoke about the day's Gospel reading about how John the Baptist, while in prison, sent followers to ask Jesus if he was the Messiah even though John had earlier baptized Jesus in the Jordan.

With an estimated 25,000 people gathered in St. Peter's Square for the midday prayer, the pope said sometimes people find themselves in an "inner jail," unable to recognize the Lord or even trying to hold him "captive" to preconceived ideas about who God must be.

"Dear brothers and sisters, one never knows everything about God, never!" he said. "Perhaps we have in mind a powerful God who does what he wants, instead of the God of humble meekness, the God of mercy and love, who always intervenes respecting our freedom and our choices."

And, he said, it is a temptation to think one knows everything about other people, too, using one's prejudices "to attach rigid labels to others, especially those we feel are different from us."

Advent, he said, is a time to let go and allow oneself to be surprised by God. 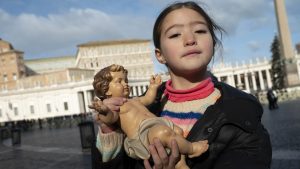 A girl holds a figurine of the baby Jesus after Pope Francis' recitation of the Angelus from the window of his studio overlooking St. Peter's Square at the Vatican Dec. 11, 2022. The pope blessed figurines of the baby Jesus brought by children for their Nativity scenes. (CNS photo/Vatican Media)

Especially as families prepare a Nativity scene or one goes to look at one set up somewhere, he said, it is an occasion to think about who the Lord really is and how to imitate him in daily life.

"Advent is a time in which, instead of thinking about gifts for ourselves, we can give words and gestures of consolation to those who are wounded, as Jesus did with the blind, the deaf and the lame," the pope said.

After reciting the Angelus prayer, Pope Francis blessed figurines of the baby Jesus that hundreds of children had brought to the square in preparation to place them in Nativity scenes at home or at school.

He asked children "to pray before the creche that the nativity of the Lord will bring a ray of peace to children all over the world, especially those forced to live the terrible and dark days of war, this war in Ukraine that destroys many lives, so many lives, and many children."