What pope’s recent executive orders mean for his reform legacy

ROME — Pope Francis’ decision last week to restructure one of the Vatican’s most important offices highlighted his ongoing desire to streamline curial procedures and expedite the prosecution of abuse cases.

However, some have warned that regardless of his intentions, the implementation of these changes might not have the desired effect.

On Feb. 14, the pope issued a new “motu proprio,” meaning legislation issued on his own authority, titled “Fidem servare,” or “To preserve the faith,” restructuring the Congregation for the Doctrine of the Faith (CDF), widely seen as the Vatican’s most powerful department. With origins dating as far back as the Roman Inquisition, the CDF’s main task has been to defend matters of doctrine and morality.

Principally, the new law establishes independent doctrinal and disciplinary sections within the department that will be coordinated by two different secretaries, both of whom report to the department’s prefect.

Until now, the disciplinary and doctrinal issues have been overseen by one secretary, who reports to the department’s prefect, Spanish Cardinal Luis Ladaria, SJ.

The decision to establish two independent sections in the CDF precedes the long-awaited publication of a new apostolic constitution outlining the new structure of the Roman Curia, the Vatican’s central governing bureaucracy.

It also comes one month after Pope Francis removed the CDF’s previous secretary, Italian Archbishop Giacomo Morandi, who was assigned to serve as bishop of the Italian Diocese of Reggio Emilia-Guastalla. 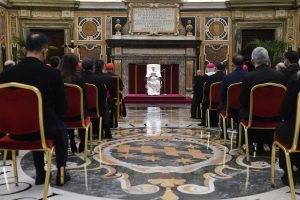 Pope Francis address members of the Congregation for the Doctrine of the Faith during an audience at the Vatican Jan. 21, 2022. (CNS photo/Vatican Media)

The CDF is currently being served by two adjunct secretaries: American Archbishop Augustine DiNoia and Maltese Archbishop Charles Scicluna, the Vatican’s top prosecutor of clerical abuse cases. There is broad speculation that after Pope Francis returns from his April 2-3 visit to Malta, Archbishop Scicluna will be tapped to lead the new disciplinary section of the CDF.

Much like his decision in 2015 to streamline the Vatican’s marriage annulment process, the restructuring of the CDF is meant largely to expedite the processing and prosecution of clerical abuse cases, which have been backlogged for years in a department that is overloaded and understaffed.

In 2001, St. Pope John Paul II issued a “motu proprio” (“on his own initiative”), titled “Sacramentorum sanctitatis tutela,” meaning, “The Protection of the Sanctity of the Sacraments,” which assigned the CDF competency in handling cases of clerical abuse against minors on top of its existing purview.

In 2010, Pope Benedict XVI updated those norms, and Pope Francis so far has sought to strengthen them and speed up the processing of the cases that arrive on his desk.

While the restructuring is a sign of the pope’s intention to streamline the CDF’s work, some have warned that having two officials inside pulling the strings might not go well, if the past has anything to tell us.

On Dec. 23, Pope Francis accepted the resignation of Ghanian Cardinal Peter Turkson from his post as prefect of the Vatican’s department for Integral Human Development, a move many observers believe was the result of ongoing tensions with Canadian Cardinal Michael Czerny, SJ, who had been leading the migrants and refugees section of the department.

Czerny, who will oversee the department until another prefect is appointed, was named a cardinal in 2019 but was left in his post at the migrants and refugees section. That move, it should be noted, was unprecedented, putting one cardinal at the service of another in the same department.

Given the prominence that issue has had throughout his papacy, Pope Francis has chosen to oversee the migrants and refugees section directly. As a result, Cardinal Czerny saw the pope more often than Cardinal Turkson did, making the dynamic awkward and, at times, confusing for underlings who didn’t know who the real boss was.

While the secretaries of a Vatican department technically report to the prefect, it’s an open secret that the secretaries are the ones who wield the bulk of the power and who keep the trains running on time.

Assuming both secretaries in the CDF will hold a similar ecclesial rank and departmental authority, some observers have voiced concern that without clear guidelines in place, the CDF could be headed for an internal mess.

What happens and who will take on the role of the department’s secretaries is yet to be seen, but for now, regardless of his intentions, the reality could be different than what Pope Francis has planned if the recent past is instructive.

Published a day after his edict reorganizing the CDF, the Feb. 15 legislation transfers some competencies previously reserved to the Holy See away from the Vatican to national bishops’ conferences and local bishops in certain areas.

These competencies include the establishment of inter-diocesan seminaries, plans for priestly formation, the dismissal of members of religious orders from their communities, the publication of regional catechisms, and the reduction of obligatory Masses attached to legacies or donations.

While this move is yet another sign of Pope Francis’ ongoing attempt at decentralization amid his curial reform, it is seen as a bit ironic. This was Pope Francis’ 49th “motu proprio” in nine years — meaning the pope who continually criticizes the “doctors of the law” is the most prolifically legislative pope in recent history.

While neither of last week’s “motu proprio” are considered major contributions to the pope’s ongoing curial reform, they could further delay the publication of his highly anticipated constitution outlining the role and function of the reformed curia, “Praedicate Evangelium,” or “Preach the Gospel.”

If anything, the “motu proprio” signal that while the process of finalizing the constitution may be slow, Pope Francis himself is not slowing down his reforms. In the end, it is likely that the constitution will reflect the changes he’s already made rather than establish them.