Some silver linings from the Catholic Church’s long year

Lives lost too soon. Closed churches. Political polarization. More scandals. The Catholic Church has not been spared the hardships that the year of the novel coronavirus has inflicted on most of our planet.

Yet for two millenia, that same Church has proclaimed what it considers to be a fundamental truth: that God himself chose to take on our human nature to free us from sin, to give us hope in the face of death and human mortality.

In that vein, it is worth keeping in mind that an institution living through one of its most challenging periods in recent history has had some blessings to count lately, small yet bright rays peeking through the dark cloud that has been the year 2020.

Take Pope Francis, to begin with. The COVID-19 pandemic forced the octogenarian pontiff to stay put in Rome, frustrating his plans but also allowing him to go full steam ahead in his push to reform the Roman Curia, a much-needed endeavor that had been undertaken by his predecessors but left incomplete.

The text of the new Vatican Constitution outlining the bureaucratic restructuring has been under review for months, and the council of cardinals advising him on the project has gone ahead, albeit in the form of Zoom meetings. Already some of the reforms have been implemented, with some offices merged, new ones formed, and others downsized.

The Holy See also saw its fair share of scandal in 2020. There was the long-awaited release of an internal report detailing the rise of former cardinal Theodore McCarrick, as well the swift resignation of Cardinal Angelo Becciu from a top Vatican post and the pope’s stripping of his rights and responsibilities as a cardinal. 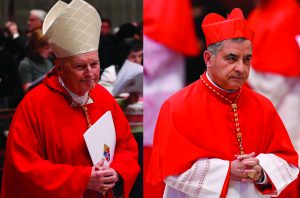 Becciu has long been suspected of corruption, and though some of the circumstances of his resignation at the pope’s request have yet to be clarified, he is currently being investigated for his involvement in a real estate scandal related to a building the Holy See bought in London under his watch.

One could argue that the Vatican has sacked personnel over corruption before. But this is the first time in recent memory that a cardinal has so publicly taken the fall for crimes not sexual in nature. To see a pope who talks the talk about uprooting corruption in the Church give the ax to a man who was once a very close adviser is a strong sign.

The pope’s inability to travel and the clearing of most of his agenda has also given him plenty of time to review the CVs of several candidates for leadership positions in the Church. He will soon have the opportunity to overhaul the Church’s central government: by the end of the next calendar year, six of the nine current Vatican department heads will have exceeded the retirement age of 75.

One of the more tangible consequences of the pandemic was the closure of churches around much of the world in the early days of the COVID-19 pandemic. For Catholics, this hiatus provided a reminder that the Church is, by principle, universal, and that there is more to it than what we find in our own little parish life. Many tuned in to attend Mass online, either with the pope, or with priests and bishops broadcasting from sometimes faraway places.

As challenging as it might have been for parishes, with many having to shut down because they couldn’t make ends meet without Sunday’s collection, this 2020 offered a chance for the Church to give a whole new meaning to “New Evangelization,” and to having an online presence to reach the “nones.”

Polls suggest less people will be returning to Mass once restrictions are over, a dire challenge that will need to be addressed. But there have been many promising signs: stories of more families praying together, the organizing of virtual spiritual retreats and the option of finding solace in Eucharistic adoration when unable to sleep at 3:00 A.M.

The Vatican ended the year with perhaps one final silver lining: the announcement of the pope’s plans to visit Iraq March 5-8 in 2021. It will be his first foray outside of Italy in 16 months, and a resumption in papal travel will go a long way towards beginning to restore a sense of normalcy: if the trip indeed materializes (pandemic conditions permitting), it would signal that the time of travel bans and seemingly arbitrary restrictions on public worship are behind us.

But more importantly, the trip will shine a much needed light on some of the world’s most persecuted and long-suffering Christians.

Since the U.S. led invasion to Iraq, the Christian population has diminished by two thirds -- from an estimated 1.4 million to less than 400,000 -- thanks to a long war and an even longer and bloodier campaign by the Islamic State to extinguish Christianity in the country. As a result, those who want to stay are few, and those who want to return to their home country from abroad are even fewer.

Francis hopes that the trip to Iraq, which will include several stops in the contested Nineveh Plains region, will bring hope to this afflicted community. It also gives him another global stage to continue reminding the world beyond the pandemic, there are still “piecemeal wars” being waged in too many parts of the world.