He thought he would stay on the sidelines. But Jacob Olivares found himself in the center of it all.

The Palmdale teen held his candle tight as he processed into the National Catholic Youth Conference (NCYC) with dozens of other teens chosen to accompany Los Angeles Archbishop José H. Gomez in a Eucharistic procession. The 16-year-old said it was a moment he’ll never forget.

“I assumed I was just going to be a watcher but I got to be a contributor. I got to be a part of something big,” said Olivares, a parishioner of St. Mary Church in Palmdale. “It was really cool.”

Being part of something bigger than yourself was one of the major themes of the NCYC, which drew nearly 3,000 young Catholics to the Long Beach Convention Center the weekend of Nov. 10-12. 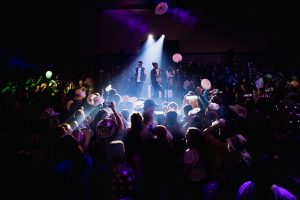 Sponsored by the National Federation for Catholic Youth Ministry, the event included speakers, breakout sessions, music, and Mass. Youth ministers, diocesan staff, and clergy also participated in workshops for those in leadership. Normally held in Indianapolis, NCYC headed west this year after the urgings of Archbishop Gomez, who wanted the conference more accessible to local youth. The archbishop welcomed the 450 member LA delegation with a private Mass.

“It is a beautiful celebration of faith,” said Archbishop Gomez during his homily. “And I think for all of us in the Archdiocese of Los Angeles it’s a great blessing to welcome so many young people from other places.”

The archbishop also spoke to the general assembly about the theme of the conference, “Walking on Water.”

“If you follow him and trust in him, if you live by his words and his will, he will give you strength to do beautiful things in your life,” said Archbishop Gomez. “And he will never leave you, never let you sink. Just call on him in your weakness, in your struggles, just as Peter did.” 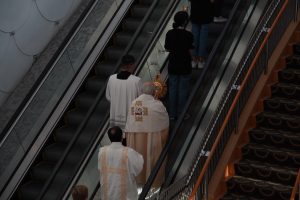 Archbishop Gomez leads a Eucharistic procession through the Long Beach Convention Center as part of the conference. (Isabel Cacho)

It was a message that some in the audience needed to hear. Daniel Medina was one of 25 attendees from St. Agatha Church in Los Angeles.

“I’ve always felt I’ve had to do everything by myself and if I didn’t do a certain thing I was worthless,” admitted an emotional Medina, age 16. “But after coming to this, after hearing God loves you, you are something, I felt a bunch of pressure pushed off me. This is a wonderful feeling.”

That joy comes from a void being filled, says NCYC’s executive director. Christina Lamas said she watched the teens’ happiness build over the course of three days.

“There is a hunger. … The pandemic increased that hunger to gather with their peers,” said Lamas. “To witness firsthand their excitement speaks to that need on the West Coast.”

Many of the high-schoolers noted it’s not easy to meet others who share their values.

“I rarely find people who are my religion,” said Yuri Huerta, also from St. Mary in Palmdale. “So it was really nice seeing all the youth together celebrating God. … I liked the whole crowd.”

Youth leaders said NCYC is a vital counter to an ever-growing secular world that can leave Catholic kids feeling alone and unsure.

“I think they’re searching within themselves trying to find their own Catholic identity,” explained Dianalee Dupree, faith formation coordinator at St. Anastasia Church in Westchester. “It’s not always easy to rely on God and your faith when everyone around you is telling you otherwise. … This (conference) is a once-in-a-lifetime opportunity.” 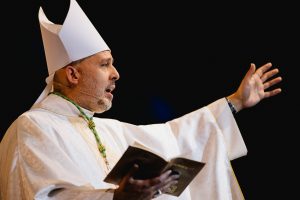 That sentiment of seizing the moment was echoed throughout the event. During adoration, Auxiliary Bishop Joseph Espaillat of the Archdiocese of New York encouraged the crowd to be completely present and “surrender” to the Lord.

“We’re going to worship God like we’ve never worshipped him before,” boomed Bishop Espaillat. “This is your night, young Church!”

And the “young church” is something the bishop knows about. At age 45, he became the youngest bishop ordained in the United States. He preaches on a podcast, raps about faith, and loves a good hoodie. Not surprisingly, after his breakout sessions, teens lined up to ask questions and take selfies with the New York native.

“There’s a deep sense of longing. … We’ve moved away from the essence of life which is the Lord,” said Bishop Espaillat. “So I gave my young people the challenge to stop trying to find themselves and find him. A lot of the young people were like ‘Wow, that’s something I never heard before.’ ”

Down the hall, young people could attend a session about trusting God during times of doubt. Speaker Paul Albert, director of Missions for Life Teen, explained it was OK to ask questions or get upset. Albert revealed he did exactly that when his brother was murdered.

“[I yelled at God] how dare you,” said Albert during his talk. “I am a missionary. I came to serve you!”

His frank admission resonated with 15-year-old Isabella Hoadrea, who lost her grandmother unexpectedly.

“I felt like God was to blame. Why would God take one of his most trusted followers?” said Hoadrea, a parishioner at St. Anastasia’s. “[Albert] helped me see why things happen and why it’s God’s plan for those things to happen.” 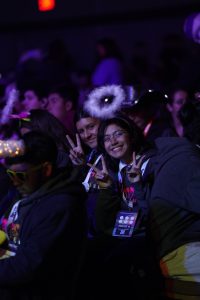 The two-year planning process for a NCYC conference includes input from the National Youth Advisory Committee, which includes three young people from the Diocese of Orange. In October, committee members went to Rome and brought back a message from Pope Francis, who told them to “be joyful and don’t lose that joy.”

In addition to the committee’s suggestions, the program was influenced by the change in location. To reflect the diversity of the west, NCYC included performances from groups like the Taiko Drum Ensemble from Crespi Carmelite High School in Encino and the Vietnamese Eucharistic Youth Movement Choir from Anaheim. There was also a Native American prayer and adoration led by the Kateri Circle of SoCal.

On a lighter note, the event tried capturing California’s beach culture by turning the exhibit hall into “La Playa,” complete with a boardwalk and mechanical shark. Teens could enjoy activities like ping pong, karaoke, and jewelry making. It was also a great area for trading, an NCYC tradition: Teens came with hats that represent their diocese then swapped with others. Attendees could also have a “Seaside Chat” with clergy members on any topic from the serious to the silly. Volunteers said they received queries on how to explain God to an atheist and what does the Church think about aliens.

The attendees also shared their concerns during confession. Day after day, there were huge lines of young people seeking forgiveness and comfort.

“My family has been struggling ever since my grandfather moved to Mexico,” said Victoria Martinez, a member of St. Agatha Church in Los Angeles. “Now that I told someone how I feel, it’s like a weight off my shoulders.”

Others teens walked away from NCYC with fresh ideas on how to go deeper into their faith.

“I learned a new way to pray. You breathe in and imagine in your heart saying Jesus, Jesus, Jesus,” explained Michael Behtash of St. Mel Church in Woodland Hills. “I found that technique helped. I really, really appreciated it.”

Nancy Dutton first experienced NCYC as a teen and now as a youth minister got to see her students benefit the same way she did.

“It’s beautiful to see their hope and how they light up,” said Dutton, youth minister at St. Mary Church in Palmdale. “They get to see beyond what they know at home. The Church is bigger.” 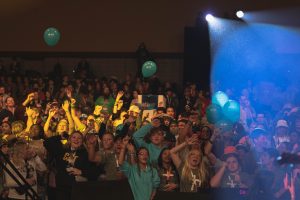 Many participants said they walked away from this year’s conference with fresh ideas on how to live their faith more deeply. (NCYC)

After the closing Mass and everyone headed home, archdiocesan leaders said they felt the conference truly met the needs of our local teens.

“It created a space for them to encounter the Lord in a personal way and through each other,” said Dayrin Perez, coordinator of youth ministry. “... Hearing their experiences left me inspired and full of hope! The young Church is alive!”

Perez would like the event to return someday but next year it’s already scheduled for Indianapolis. NCYC said future locations are under review. As for now, the objective was simple.

“One goal — an encounter with Christ. That’s it,” said Llamas. “Then I hope they take this back to their parishes and live it out.”

She may get her wish.

Huerta, who also carried a candle in the opening procession, said NCYC helped get her out of her shell.

“I want to be more involved in the Church and I feel after this I really will be,” said the 15-year-old. “I want to be able to spread the word, especially to kids my age.”