Celibacy book uproar illustrates the conundrum of an ‘emeritus pope’

ROME — A tempest raging in Rome about a new book defending priestly celibacy originally billed as “co-authored” by Pope Emeritus Benedict XVI and Cardinal Robert Sarah of Guinea, and now as authored by Cardinal Sarah with a “contribution” from Pope Benedict, neatly illustrates several realities about Catholic life in the early 21st century.

First, it captures the way media (especially social media) can have a funhouse mirror effect, turning everything into a political cat fight. Second, it also reveals the Vatican’s chronic inability to manage communications in a crisis environment.

Perhaps of most lasting importance, the controversy underlines that the role of a “pope emeritus” remains a novelty, and that defining the role and functions of a retired pontiff remains a work in progress.

The affair began on Jan. 13, when the daily Le Figaro in France published excerpts from the new book, published in English by Ignatius Press. As the news made the rounds it caused a sensation, since Pope Benedict and Cardinal Sarah’s vigorous defense of priestly celibacy comes at a time when Pope Francis is contemplating a limited exception to the celibacy requirement.

During last October’s Synod of Bishops for the Pan-Amazon region, more than two-thirds of the prelates recommended that Pope Francis give permission for the ordination of “viri probati,” meaning tested married men who are already deacons, to serve isolated rural communities which, right now, may be lucky to see a priest once a year or less frequently.

Pope Francis is said to be preparing conclusions from that synod, which could appear as early as March. Thus the book was taken as a conservative push to force the pope’s hand, and the fact that the pope emeritus was involved lent that impression the air of high drama.

Many observers insisted it was inappropriate, even disloyal, for a former pope to speak out in such a way, while others claimed Pope Benedict was obligated to address such a critical issue.

(In all reality, this was never “pope vs. pope” in the way it was presented by breathless social media posts. Both Popes Benedict and Francis have defended priestly celibacy, and both contemplated narrow exceptions: Pope Benedict authorized one in 2009 by creating ordinariates for former Anglicans.)

Next, the hunt was on to find out what Pope Benedict’s actual role in the book had been, with Cardinal Sarah insisting all along the former pope had been fully informed. 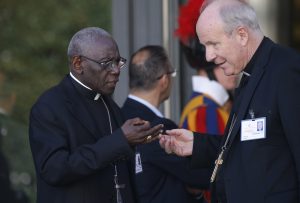 Cardinal Robert Sarah, prefect of the Congregation for Divine Worship and the Sacraments, talks with Cardinal Christoph Schonborn of Vienna after a session of the Synod of Bishops for the Amazon at the Vatican Oct. 9, 2019. (CNS photo/Paul Haring)

Eventually, Pope Benedict’s closest aide, German Archbishop Georg Gänswein, was forced to issue a statement saying that while Pope Benedict had agreed to allow Cardinal Sarah to use his essay on celibacy, the former pope had asked that his name be removed as co-author and also from the book’s introduction and conclusion.

Perhaps the overheated reaction expresses one point above all: We still don’t know what the role of an emeritus pope is supposed to be. As things develop from here, there would seem to be three basic possibilities.

- The “monk” option: This seems to be the choice those most outraged by the book are advocating. The idea is that an ex-pope should, in Pope Benedict’s own words upon his retirement, remain “hidden from the world.” If not in the Vatican itself, they should spend their retirement in a monastic setting someplace, engaged in prayer and private reflection but not engaging in any public discussions. The problem with this option is that by the time a pope would retire, he’s spent a lifetime thinking deeply about issues in the Church and has an absolutely unique perspective to offer. Do we really want to muzzle them completely?

- The “ex-president” option: By now in the U.S., there’s a fairly clear script for the role of a former president. They’re still addressed as “Mr. President” (or, someday, “Madame President”), still afforded the respect of the office, and in exchange they generally stay out of the day-to-day political fray. Yet they have an active public role, often launching foundations for causes they care about, hitting the lecture circuit, giving interviews, and so on. From time to time they may appear at political conventions or campaign rallies, and no one’s stunned when they take positions that differ from their successor, especially if he or she is from a different party. The problem with this option is that popes aren’t presidents, and treating them as such arguably risks both cheapening and politicizing the office.

- The “private citizen” option: Under the theory that there’s no such animal as two popes at once, advocates of this view believe that a retired pontiff shouldn’t be referred to as “pope” in any way, even “emeritus,” and shouldn’t wear the papal white. A former pope should go back to being “Cardinal So-and-So,” even “Father So-and-So,” and whatever he has to say shouldn’t be regarded as having any papal aura. The problem is that it’s often not so easy to step back. Just ask Harry and Meghan, who don’t seem to be fading from view after having announced their intention to withdraw from “senior royal” status.

As the forgoing should suggest, there probably isn’t an obvious, no-brainer solution on offer that would resolve the conundrums associated with an “emeritus pope.” The question now is whether we’ll have an open conversation that might lead to a creative synthesis, or whether — as is so often the case — we’ll simply lurch on, buffeted by what British Prime Minister Harold MacMillan (possibly apocryphally) is said to have defined as the bane of politics: “Events.”