Natalia Tsarkova, official portrait artist to the popes for more than 20 years, likes to work from real life.

“I am so meticulous about details. I have to see and touch and feel everything,” she said.

But for her latest painting, a portrait of Benedict XVI in his life as pope emeritus, some objects could not be brought back to her studio in the historic center of Rome.

To make a study of his rosary, Tsarkova had to visit the retired pope at his home, the Mater Ecclesiae Monastery in Vatican City, “because Pope Benedict won’t part with his rosary,” she said.

The Russian-born artist, who has lived in Rome full time since 1995, told EWTN News in an interview last week that Benedict’s rosary is “part of him; it’s his favorite rosary.” 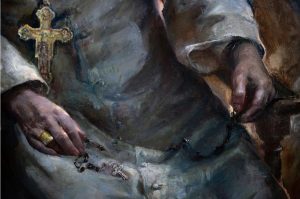 In 2006 and 2007, Tsarkova painted two other official Vatican portraits of Pope Benedict XVI. Now, she is portraying him in his “mission” as pope emeritus.

“Because [his] life isn’t over,” the artist said at her home and studio close to Piazza Navona. “Here are books, manuscripts, that his guardian angel is holding and pointing out, ‘Holy Father, look at these books that you’ve written. There is a lot more to publish to give light to your writings,’” she indicated.

Tsarkova unveiled the painting, which took four years to create, during a ceremony on Nov. 3 in Palazzo Cesi, a building close to the Vatican. 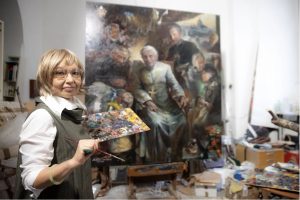 The artist said she “chose the dawn to illuminate the painting. It’s a symbol of hope and new life. And this light illuminates the pope emeritus. It illuminates ... his hand, his right, and very importantly, his rosary.”

Other important aspects of the retired pope’s personality also appear in the work — Tsarkova called them “secrets” because they appear as very small details: Benedict’s ginger cat washing itself in the background, and in another part, a reflection in a jug shows Benedict XVI playing the piano.

“Music is not only notes, but it is also part of his soul,” the artist commented. “Music is in everything, and in prayer there is also music.”

Roses, “a symbol of Mary, the Virgin Mary, and a symbol of love,” also appear in the painting, she pointed out. “Roses are Pope Benedict’s favorite flowers. I asked about this,” Tsarkova said. 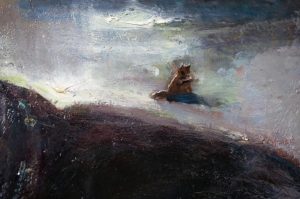 In addition to Benedict, the portrait includes his personal secretary, Archbishop Georg Ganswein, and his brother, Msgr. Georg Ratzinger, who died in 2020.

Tsarkova was able to sketch the elder Ratzinger brother during one of his visits to Rome.

“I put them together as if here they were one,” she said. “He leans in and listens to what Pope Benedict says, and you can see he’s thinking about something beautiful.”

The portraitist has also chosen to include the women who help Benedict every day with the cooking, cleaning, and laundry: Sisters Cristina, Carmella, Loredana, and Rosella from the Memores Domini community. She called this Benedict’s “Pontifical Family.” 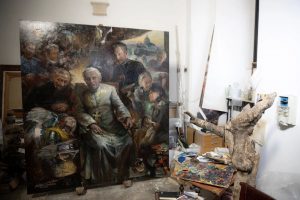 In the painting, Sister Carmella, she explained, is sewing a button on Benedict’s cassock.

“There is a folk saying: if you want to make a wish, you must sew on a button. And then Sister Carmella makes a wish that the pope will always be healthy,” Tsarkova said, adding, with a smile, that one would have to speak to the sister to know what she is really wishing for.

Tsarkova’s first official papal portrait was of St. John Paul II. She created a total of three drawings and three oil paintings of the Polish pope; the first was done for his 80th birthday during the Jubilee Year 2000 and now hangs in the Vatican Museums.

Over the course of her career, she has painted the saints, the Virgin Mary, and the Last Supper, and has done portraits of the popes and cardinals, among others.

Tsarkova’s portraits of Pope John Paul I and Benedict XVI are also displayed in the Vatican Museums.

In 2001, she was allowed into the synod hall to paint the general assembly of the Synod of Bishops. 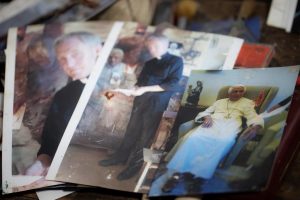 While working on her latest painting, Tsarkova would often visit the pope emeritus to do sketches or to take pictures of him and his environment to take back to her studio.

The hardest part of the painting to get right, she said, was Benedict’s face. But she also spent a lot of time on the overall composition: “I did not want the movements within the painting to repeat any other movements. It all has to be in harmony.”

The Moscow-born artist was working on the portrait during the COVID-19 pandemic, including the months-long lockdown in Italy.

During that time of isolation, alone with only her pet owl, Tsarkova said the painting kept her company. 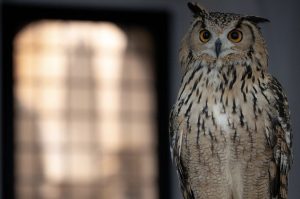 Tsarkova’s pet owl perches atop the painting in her studio. (Daniel Ibáñez/CNA)

Tsarkova, who is Russian Orthodox, said she sees Benedict as “a teacher, a father, and a friend.”

During the pandemic, the Vatican sent her fruits and vegetables from the gardens, and Benedict sent her a prayer book, “so we could pray together,” she said.