The associate pastor at the time, Father Peter Irving, explained that this relic was stored at the archdiocesan Archival Center at the San Fernando Mission, and that he had requested it for the novena at St. Finbar. This tiny piece of the tilma is the only piece in existence outside of Mexico City. Being a devoted child of Mary, this fact providentially stuck with me.

Little did I know that Our Lady would save the life of my husband, Vicente, a decade later.

On Friday, May 3, 2002, my husband collapsed due to the rupture of a brain aneurysm. He immediately fell into a coma, flatlined en route to the hospital, and was given less than a 5% chance of surviving. He was 42 years old.

When we went to see him at the hospital, we were greeted by a medical team who took us into a private office and explained that he was gravely ill and that he would most likely not make it through the night. Two different priests went that night to anoint him.

The neurosurgeon on call performed an emergency procedure of drilling a hole in my husband’s brain to relieve the pressure. The ventriculostomy drained his brain fluid and the blood from his bleeding brain into a bag. The doctor said that if he survived the night, he would attempt brain surgery.

Hundreds of people began to pray for his recovery. What followed was a series of one miracle after another.

Ian, a 10-year-old friend of the family, offered up his first holy Communion on Saturday, May 4. Ian’s uncle was my husband’s physician and at the time that Ian was receiving holy Communion, my husband miraculously woke up from the coma. 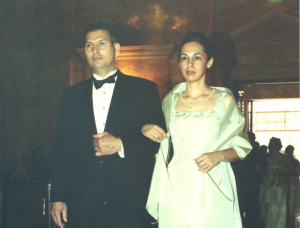 Vicente and Alma Cornejo attend a wedding in 2002, a short time after a ruptured brain aneurysm nearly claimed Vicente's life.

Through what I firmly believe to be divine intervention, my husband was transferred to Keck Hospital of USC where doctors were able to seal the brain aneurysm with a coil (a newly pioneered technique at the time) instead of open-brain surgery.

He spent the next four weeks in intensive care. He did not recognize anyone, not even me, his wife. He developed multiple complications, and doctors at Keck wanted to wait for him to stabilize before placing a shunt in his brain, as he was draining more than 90% of his brain fluid into the external bag.

I questioned several neurosurgeons about the idea of attempting surgery on such a sick man. They all said that he would definitely need such a surgery, to which I would reply that we were praying for his recovery without a shunt.

It was easy to see that we were praying: A Norbertine priest said Mass daily in his room, a priest of Opus Dei visited him daily, and the room was decorated with holy cards of Bl. Álvaro del Portillo and St. Josemaría Escrivá, among many others.

On May 12, Mother’s Day, the doctors came in to inform me that he had taken a turn for the worst. He had developed meningitis and they would not be able to place the much-needed shunt, which put him at greater danger of developing another infection.

To make matters worse, he was not responding to antibiotics. Nothing seemed to bring the fever down, so he was placed on an ice blanket in an effort to reduce his temperature.

I asked again if the shunt was necessary and doctors told me that it was not only necessary, but urgent. I asked about his prognosis and the doctors were clear that he would likely never walk or recognize people.

It was then that I remembered the relic at the San Fernando Mission.

Our family attended Mass at the mission and my husband was an extraordinary minister of holy Communion. So I asked Msgr. Francis J. Weber, the archivist for the archdiocese, whether he could bring the relic. He came to the hospital on May 15 and blessed my husband with the only piece of the tilma in existence outside of Mexico.

I was sure that Our Lady would work a miracle! My husband had a tube coming out of his head and multiple IVs. He was on an ice blanket. He had a brain infection, pancreatitis, and hepatitis, and he was not responding to treatment.

But on Thursday, the doctor noted that my husband was draining only 50% cerebral fluid into the bag, only 25% on Friday, and nothing by Sunday. We had a miracle!

On Monday, a team of about 15 neurosurgeons and students came in to examine my husband and take a look at his medical record. Though he was not quite “out of the woods” and still in intensive care at that moment, the lead neurosurgeon said he did not have a medical explanation for the healing.

The impossible became possible and my husband would not need a shunt.

“Mrs. Cornejo, I don’t know who you prayed to, but if I ever need a miracle, I’ll be calling you,” the doctor said.

My husband began to recover by leaps and bounds and was home by June 6. We even went on to have another daughter after five straight miscarriages (all of which occurred before Vicente’s illness). We named her Frances Marie, because, after all, we could not leave the Blessed Mother out of her name.

Though he was not able to return to work, 17 years later Vicente is a loving husband and a joyful father to five children, a devoted parishioner at Guardian Angel Church in Pacoima, and still a passionate musician. 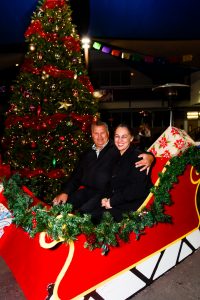 I put my story into words because we have seen her intercession in our lives, and I look back at my life knowing that we are safe in Jesus’ arms. Being blessed in a special way by this relic is still possible in this great “City of Angels,” and so I can tell others with confidence: Take your needs to her, she will always be our mother.

That is why, on Dec. 11, Vicente and I celebrated the feast of Our Lady of Guadalupe at the Cathedral of Our Lady of the Angels, where the relic of the tilma is now permanently housed: to thank her and show our love to her.

Miracles, Our Lady of Guadalupe

Alma Cornejo is the principal of St. Therese School in Alhambra.