Seventy-thousand Miraculous Medals are now hanging near the hearts of 70,000 Catholic school students in Southern California.

The blessings they’ll bring this Christmas season are thanks to a one-of-a-kind gift for students in the Archdiocese of Los Angeles, and a dream come true for the anonymous donor who bought them. The medals, which carry a sacred promise from Mary, were blessed and handed out in most schools on Dec. 8, the feast of the Immaculate Conception.

Perhaps none were more excited than the students at St. Catherine Labouré School in Torrance, whose namesake originally created the medals in Mary’s honor. The commotion was so loud, it reverberated throughout the campus.

“We were in the office and all of a sudden we heard a roar of student noise. They were just so excited to have them,” said Tricia Holmquist, Ed.D., principal of St. Catherine’s. “It became a day of celebration.”

That celebration was repeated at every Catholic school from Los Angeles County to Santa Barbara County. At Holy Name of Mary School in San Dimas, students were visibly moved by the unexpected gift. Derek Rhodes touched the medal as the chain was clasped around his neck.

“It feels special,” said Holy Name seventh-grader Rhodes. “Even though they don’t know me, they wanted to give me something that reminds me we are all connected to Mary.” 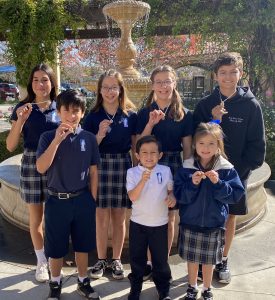 Students at Holy Name of Mary School in San Dimas with their medals after Mass on Dec. 8. (Submitted photo)

Earlier this year, the private individual wrote to the archdiocese with an unusual offer: the benefactor would buy the Miraculous Medals if the Catholic schools would dispense them.

The benefactor explained that they were on a 10-year “mission” of gifting medals and had already done so in other cities, such as San Francisco and Sacramento. The motivation stemmed from the medal’s origin story, and the belief that “the Blessed Mother promised to provide special graces and protection to anyone wearing the medal around the neck.”

The contribution, worth some $250,000, was happily accepted. Erick Rubalcava of the archdiocese’s Department of Catholic Schools (DCS) sees the medals as a morale booster following the COVID-19 pandemic.

“I thought maybe this could help [students] find a bit more grounding through the eyes of faith and help them on their spiritual journey,” explained Rubalcava, chief of Mission and Catholic Identity for DCS. “The Catholic Schools Department is really concerned about the entire child, not just their academic well-being … we’re about serving the soul as well.”

The Miraculous Medal depicts the Blessed Mother standing on a globe. Her open hands are streaming out rays of light while her feet are crushing a serpent. The back of the medal shows the Sacred Heart of Jesus encased in thorns next to the Immaculate Heart of Mary pierced by a sword.

The design itself is divine. In 1830, French nun Catherine Labouré was meditating when Mary appeared and tasked her with making the medals. The saint said Mary explained that the medals will protect those who pray the inscription, “O Mary, Conceived Without Sin, Pray For Us Who Have Recourse To Thee.”

The prayer directly references the mystery celebrated on the feast of the Immaculate Conception, so priests at many schools took the occasion to bless and distribute the necklaces during Mass that day. Others, like Damien High School in La Verne, choose to wait for theology classes to allow for more discussion about their meaning. After learning about the medals’ significance, Elias Davila said he’ll wear his “all day.”

“Knowing that Mary is watching over me, taking care of me, as my own mother would, maybe even more … it’s really powerful,” said Davila, a senior at Damien. “I think it’s important to continue to grow in my relationship with Mary.” 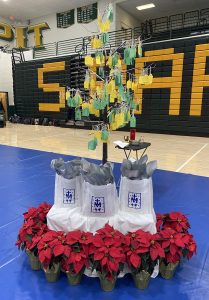 Before distribution, the Miraculous Medals were placed at the foot of the "gratitude tree" at Damien High School in San Dimas. (Submitted photo)

Fittingly, the Miraculous Medals at Damien were displayed beneath the school’s “gratitude tree,” where students wrote on paper ornaments what they were thankful for this Advent and hung them on the branches. Damien president Joseph Siegmund, Ph.D., said he was thrilled that his students were receiving this sacramental.

“Being gifted with Miraculous Medals for each of our students demonstrates the miracles found within our faith,” said Siegmund. “And how God the Father, God the Son, and God the Holy Spirit continue to work miracles through prayer and the intercessions of Mother Mary. In turn, leading more of the faithful to her son Jesus Christ and to a stronger relationship with God.”

Because of the inscribed prayer, the Miraculous Medal was originally known as the Medal of the Immaculate Conception. But from the start, those wearing the medals began recounting stories of the many blessings that Mary promised. People took to calling the necklace “miraculous” and the name stuck.

The children seem to sense the medals’ power.

“It makes me feel safe and secure,” said Adrienne Ortiz, an eighth-grader at Holy Name of Mary School. “If I ever feel nervous before tests or anything, I’m able to hold it.”

Holy Name of Mary co-principal Brenda Berumen said the Blessed Mother is “the center” of the school and even the youngest children understand her importance. Kindergartners got a simplified explanation of the medals and spent the morning talking about Mary. 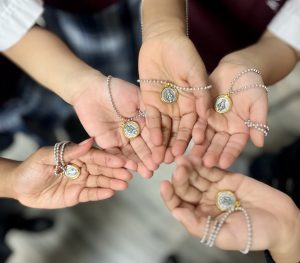 Students at St. Bernard School in Bellflower hold their newly blessed Miraculous Medals on Dec. 8, the feast of the Immaculate Conception. (Submitted photo)

Assembling, packaging, and delivering the Miraculous Medals to some 250 schools was a daunting project, so much so that the donor provided instructional videos on how to get it done.

For a few days, the five schools became mini-factories where staff and students put the necklaces together then wrapped them for delivery. Rubalcava was pleased with how the schools all banded together on relatively short notice.

“Every region responded tremendously. I was so proud,” said Rubalcava. “This was a unifying project for all our schools.”

And an uplifting one.

“I would like to thank the private donor for the extremely generous donation that he/she made,” said Holmquist. “I can’t tell you how grateful the students, faculty, and staff members were to receive them. … It was a beautiful day.”

Matthew Coronado said he’s fortunate to attend Damien because of a scholarship and now feels twice blessed by receiving the Miraculous Medal. He intends to carry on that spirit of generosity by one day working as a pro-bono lawyer.

“This [medal] is another example of the kind of love I’ve been blessed with,” said Coronado, a senior at Damien High School. “Now I want to give back in some way. … I want to help those who need it.”