By a 6-0 vote, the Ventura City Council approved a motion at the end of a special meeting on Wednesday, July 15, to permanently remove two statues of St. Junípero Serra from public land. It also agreed to follow a recommendation to have at least one of them – a 9-foot bronze statue currently protected by a chain-linked fence and video surveillance cameras just outside of the council chambers – be relocated to Mission San Buenaventura.

The decision came on the feast day of the city’s namesake, St. Bonaventure, and hours after Pope Francis’ elevation of Mission San Buenaventura to the rank of minor basilica was made public. Both occasions were noted during the three hours of public discussion on the video-streamed online session.

Wednesday was the second of two extended special public meetings – including one on July 7,  that combined to last more than seven hours and allowed more than 200 speakers to be heard in what council member Jim Friedman sized up as a 50-50 split in opinion. There were also more than 2,500 emails submitted to the council to consider, noted Deputy Mayor Sofia Rubalcava, presiding over the meetings after Mayor Matt LaVere recused himself.

On June 19, LaVere joined Father Tom Elewaut, pastor of Mission San Buenaventura, and Chief Julie Tumamait Stenslie, whose Barbareño/Venureño Band comprises Chumash members, in a joint statement recommending the statue be moved “to a more appropriate non-public location” – with the intent of having it moved to the San Buenaventura Mission, the last founded by St. Junipero in 1782.

“We all believe that the removal of the statue should be accomplished without force, without anger and ... without uncivil discourse, much less vandalism,” said the joint statement last month. “A historic decision such as this must involve the Ventura City Council, the voices of the Chumash tribe and residents of Ventura.”

In a June 29 letter, Archbishop José H. Gomez addressed the controversies surrounding the removal of public monuments to St. Junípero in LA, San Francisco, and Sacramento, and praised Ventura’s handling of the debate over its own monument as a possible “model for thoughtful and respectful public discourse that includes civil authorities, indigenous leaders, representatives of the Church, and the community at large.”

The Ventura statue of St. Junípero has been protected by fencing since a July 4 protest. 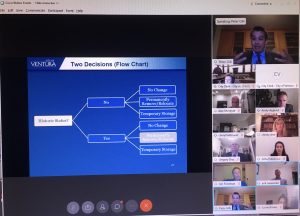 The council deliberated for an hour before taking the 10:30 p.m. vote, and needed to approve three motions related to the statues. It started with the conclusion that the bronze statue was not an historic landmark and could be moved by a vote without further action by the California Environmental Quality Act.

Council member Lorrie Brown said Wednesday before her approval of the final motion of statue removal that “there is nothing better than getting input from residents and hearing the diversity of voices.

“I heard one of the public speakers ask: ‘What would Junípero Serra do?’ I heard that he was a benevolent man who wanted the best. What would he want for Ventura today? I’ll use the words of another speaker who quoted Serra as saying, ‘Ever forward, never back,’ if we’re going to move forward this deliberation about placement of the statues.”

Council member Erik Nasarenko agreed that with St. Junípero's “religious iconic saint status, he should be at the mission. That needs to be preserved and held on religious property but not city property.”

Rubalcava also admitted that as a child, she grew up “going to the mission a few days a week and some of my earliest memories are playing in the fountain at the mission gardens. As a child I didn’t know the history of the missions until I got to college and that shed a lot of light on who writes history. By permanently removing the statues from public city property we are taking a step to healing our Chumash community. The mission is the most ideal place for the statue.”

Some citizens pushed for the matter to be decided not by the city council but from a public vote during the upcoming November general election. That option was problematic; the city attorney, Gregory Diaz, reminded the council that the July 1 deadline had already passed for that to even be considered, and a special election to vote on the matter would cost about $250,000 in taxpayer funds.

The bronze statue of St. Junípero outside Ventura City Hall has been there since 1989. It is a second-generation replica of the 1936 statue built of concrete by artist John Palo Kangas. That original statue was designated as City of Ventura Historic Landmark No. 3 in 1974 by a council resolution. The bronze version of the statue is not considered to be an historic landmark, the city’s Historic Preservation Committee concluded in a recent public meeting.

When the original was taken down for repairs in the early 1980s, a wood replica was put in its place in 1988. Ventura then accepted a bid from the California Sculpture Center at College of Desert in Palm Springs to create a bronze cast from the wood replica. The wood version was moved to the Ventura City Hall atrium in 1988. That version will also be removed from public grounds to a safe storage place until it can be determined where best to donate it for display.

The current bronze St. Junípero statue has been vandalized several times over the years, despite efforts from those who have steadfastly tried to protect it with human chains and prayer circles.

Archbishop Gomez also recently wrote that those “attacking St. Junípero’s good name and vandalizing his memorials do not know his true character or the actual historical record.”

The archbishop called for the observance of St. Junípero's July 1 feast day as “a day of prayer, fasting and charity.”