The pastor of Mission Basilica San Buenaventura voiced his concerns to Ventura County officials about “inaccurate, inflammatory testimony” targeting the legacy of St. Junípero Serra that led to the removal of the Franciscan missionary’s likeness from the county seal earlier this year.

“The missions in California remain a testament to the founding of Western civilization and the introduction of the Catholic faith — which most Indigenous descendants in California profess,” said Father Thomas Elewaut in remarks to the Ventura County Board of Supervisors Sept. 20.

On May 24, 2022, the supervisors voted 4-1 to approve a new county seal depicting Anacapa's Arch Rock, a landmark near the county’s Channel Islands. In addition to an image of St. Junípero, the new seal also removed images referring to the oil industry, sailing, agriculture and atomic energy that were in the original seal. 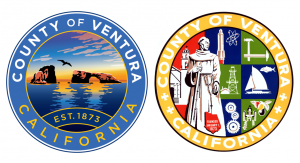 The new Ventura County seal (left) adopted in May 2022 and the old one, originally adopted in 1964.

The pastor has said that he “disagrees strongly” with why the decision to remove the saint from the seal was made and “finds the motive at variance with the facts.”

Father Elewaut, who also serves as director of Historic Mission Sites for the Archdiocese of Los Angeles, told the supervisors that he was offering the clarifications “in the spirit of dialogue.” He cited the research of several secular historians in his remarks, including Drs. Rose Marie Beebe and Robert Senkewicz of Santa Clara University, Gregory Orfalea (formerly of the Claremont Colleges) and retired University of Redlands historian Dr. James Sandos.

Among the claims refuted by Father Elewaut is that St. Junipero was responsible for genocide of California’s native peoples.

The priest also cited research showing that contrary to claims made by some activists, indigenous peoples were not forced into the mission system under St. Junípero.

“They voluntarily came in for a variety of reasons that ranged from disorientation due to smallpox and other diseases that were ravaging their villages, to protection from inter-tribal warfare to clothing and food,” said Father Elewaut.

The mission system was active in areas comprising just one quarter of California’s native population at the time, the priest said. He cited research estimating that only about 10 percent of natives ever fled the missions.

“We may ask ourselves:  If things were so bad, why did 90 percent stay?” said Father Elewaut at the meeting.

Father Elewaut concluded his remarks by thanking the board “for the opportunity to correct an inaccurate, inflammatory testimony about Junípero Serra that appears to have contributed to actions that do not conform to the facts.”