When Father Tom Elewaut saw the name on his phone’s caller ID the night of June 30, the pastor of Mission San Buenaventura guessed the call had something to do with the recent controversy over whether to remove the statue of St. Junípero Serra in front of Ventura’s City Hall.

“I’ve got some good news,” said Archbishop José H. Gomez on the other end of the line. “You’re a minor basilica.”

Father Elewaut’s voice started to crack with emotion. He’d spent the last six years researching, praying, and waiting for Pope Francis to decide whether to elevate his 238-year-old parish to the rank of “minor basilica.”

Two weeks later, on July 15, the feast of the mission’s namesake, St. Bonaventure, the pope’s  decision was made public. At a special 7:30 a.m. Mass celebrated by Archbishop Gomez, along with Father Elewaut and regional Auxiliary Bishop Robert Barron, Mission Basilica San Buenaventura was unveiled as the first basilica in the Archdiocese of Los Angeles and the 88th in the United States.

“When the pope designates a basilica, it means this is holy ground, that something beautiful and important in the history of salvation happened here,” Archbishop Gomez said at the Mass, held outside in the mission’s garden due to restrictions on outdoor religious services mandated by California Gov. Gavin Newsom just two days earlier in light of the recent spike in coronavirus (COVID-19) cases in the state.

Of the nine missions St. Junípero founded in what is today California, Mission San Buenaventura has the distinction of being his last.

St. Junípero had planned to establish San Buenaventura as the third mission in Alta California, but was forced to wait more than a decade before receiving approval.

When the mission was eventually founded, on Easter Sunday, March 31, 1782, St. Junípero alluded to the fact that it took the Church more than 200 years after Bonaventure’s death to declare him a saint.

“Today [God] has been kind enough to grant me the consolation, after many years of longing, of witnessing the founding of the Holy Mission of Our Seraphic Doctor San Buenaventura,” he said. “And the same thing can be said of this founding as the canonization of the saint: ‘Quo tardius, eo solemnius’ [‘The more slowly, the more solemnly’].”

In other words, the longer delayed, the sweeter the celebration.

And in many ways, this expression could also characterize the nearly 45 years it took for St. Bonaventure’s mission to be named a basilica. 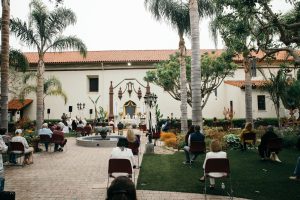 Pope Francis' decision designating Mission San Buenaventura a minor basilica was announced at a 7:30 a.m. Mass in the mission's garden on July 15, the feast of St. Bonaventure. (Colton Machado/Archdiocese of Los Angeles)

A bumpy road to ‘basilica’

The first attempt to get Rome to recognize San Buenaventura as a basilica ended in failure. And the second one almost did, too.

The pursuit began in 1976, when the Vatican gave the archbishop of Los Angeles at the time, Cardinal Timothy Manning, approval to solemnly consecrate the mission’s 167-year-old church building.

Msgr. Francis J. Weber, one of the eminent historians of the Church in California and the United States who was then the administrator of the mission, suggested that the mission seek a further honor from Rome.

But soon after Cardinal Manning submitted the three-page application, it came back from Rome denied. Despite Msgr. Weber’s request that he make a second attempt, Cardinal Manning decided not to push the issue any further.

The idea of making San Buenaventura a basilica was not given serious thought again until 2011, when Father Elewaut arrived as the mission’s new pastor. He started going through the parish records and came across Msgr. Weber’s original application, along with the rejection letter from Rome.

“I thought, ‘I wonder if we would have the opportunity to reopen a new request?’ ” Father Elewaut recalled.

The new pastor approached Archbishop Gomez and, after some consultation, in 2014 he gave Father Elewaut the green light to start the process anew. 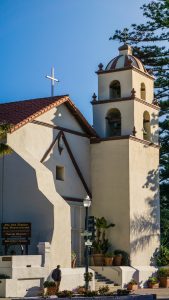 As befitting a former high school principal, Father Elewaut spent the next four years studying and researching, building his case for the mission’s pastoral and historical importance.

One of Father Elewaut’s main challenges was separating fact from fiction about San Buenaventura. He diligently sought out citations to back up statements that had been made about the mission’s history over the years.

His research complete, in 2018, the application was submitted to the Congregation for Divine Worship and the Discipline of the Sacraments in Rome.

Yet it seemed that history was fated to repeat itself. Later that same year, the application came back rejected — again.

In its denial, the Vatican cited what Father Elewaut described as a pair of liturgical “faux pas” that he had made to accommodate the building’s limited space. He had placed the baptismal font in the sanctuary, “a liturgical no-no” for Rome, as he put it. Also frowned upon by Rome was his positioning of the presider’s chair in front of the altar, instead of off to the side.

Father Elewaut dutifully made the required changes and sent a new application to Rome. On June 30, the vigil of St. Junípero’s feast day, the mission’s pastor received the news he’d spent years praying to the saint for.

The priest credits Archbishop Gomez for helping him persevere during the long process.

Archbishop Gomez has often expressed a deep devotion to St. Junípero, and was instrumental in pushing for his canonization, something Pope Francis obliged in 2015, celebrating the saint’s canonization Mass on the steps of the Basilica of the National Shrine of the Immaculate Conception in Washington, D.C.

“He’s been very encouraging and supportive all the way through,” Father Elewaut said of the archbishop. “Even when I thought ‘Well, if we don’t receive it, at least we put our best foot forward.’ He’d always say, ‘We’re going to get it, we’re going to get it, you just wait.’ ”

In making a church a basilica, the pope declares the church to be one of his own.

There are just over 1,800 minor basilicas in the world, and before the July 15 announcement, 87 in the whole United States, and six in the state of California.

For Bishop Barron, the announcement had a special significance. Five years ago, two months after St. Junípero’s canonization, he was installed as episcopal vicar for the Santa Barbara region of the Archdiocese of Los Angeles in a Mass celebrated at Mission San Buenaventura.

In an interview with Angelus, he said basilicas are a potent symbol of the Church’s universality.

“It’s a way of linking churches spread all over the world to the pope,” he said, adding, “We put strength in diversity today, which is great, but we can sometimes overlook the importance of unity, what brings us all together as one community, despite our massive differences in language and culture.”

Now that Mission San Buenaventura is a basilica, it will receive a series of symbolic “upgrades”: a cone-shaped canopy, known as an “ombrellino,” will now be placed above the church’s lectern; a bell mounted on a pole, known as the “tintinnabulum,” similar to that used during the Middle Ages to signal the pope’s approach, will now be used in parish processions; and the insignia of the Papal Cross Keys will appear in banners, signs, and over the mission’s doors.

The faithful will also now be able to obtain a plenary indulgence, which removes the temporal punishment due to sins, on predetermined “basilican feast days.”

But for Father Elewaut, who likes to teasingly remind his fellow priests that he is St. Junípero’s 30th successor as pastor of San Buenaventura, the honor is less about pomp and pageantry and more about motivating his parishioners to live and share their faith in a more authentic way.

“This is going to put a greater responsibility on the parish leadership and the people of the parish to discover new ways of evangelization in the spirit of St. Junípero Serra and St. Bonaventure,” he said. 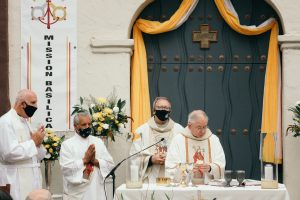 The change in status comes at a difficult time for the mission on multiple fronts.

Across the state, statues of St. Junípero are falling in the wake of angry protests that wrongly blame the saint for the historic mistreatment of Native Americans. Last month, statues to the missionary were toppled in San Francisco and in Los Angeles, and the weekend before the fire, a long-standing St. Junípero statue outside the state Capitol building in Sacramento was felled.

On the day the new basilica designation was to be announced, the Ventura City Council voted to remove a St. Junípero statue from in front of City Hall. And the weekend before the announcement, a mysterious overnight fire ravaged the church of another mission in the Archdiocese of Los Angeles founded by St. Junípero, Mission San Gabriel Arcángel. While the cause of the blaze is still under investigation, many see its timing — on the same weekend that saw several acts of anti-Catholic vandalism around the country — as suspicious.

Two days prior to the announcement, California’s governor ordered houses of worship to cease indoor gatherings for the foreseeable future as part of a statewide reclosure amid a spike in coronavirus infections.

The governor’s announcement left Father Elewaut and parish staff scrambling to transform the mission’s garden into a liturgical space to celebrate the first Mass at the newly named basilica.

Once the pandemic passes, Father Elewaut looks forward to hosting a larger, more festive celebration to mark the milestone. For now, he’s asking his saintly predecessor to help him keep things in perspective.

“The famous words of St. Junípero Serra were ‘always forward, never back,’ ” he said on the night before the celebration Mass. “All of these missions have had destructive things happen at one time or another, whether it’s earthquakes, or fires, or even pandemics, and yet they keep enduring and keep going forward — that’s what we do.”