Following Tuesday morning Mass, the bishops of Los Angeles and Orange County gathered in a circle inside the Basilica of St. John Lateran in Rome for one more set of prayers.

With an Our Father, Hail Mary, and a Glory Be, they prayed with the tragedy that has captured the world’s attention heavy on their minds: The Jan. 26 helicopter crash in Calabasas, California, that claimed the lives of nine people, including LA Lakers legend Kobe Bryant and his 13-year-old daughter Gianna.

“Had we been in Los Angeles or Orange, we would’ve probably been at some prayer services,” explained Auxiliary Bishop Timothy Freyer of Orange, who this week is in Rome for the customary “ad limina” visit to the Holy See along with the bishops of the rest of California, Nevada, and Hawaii.

“We wanted to let our people know, especially the families of the victims, that they are in our hearts” during the four Masses celebrated by the bishops this week at each of the major basilicas of the city of Rome, Bishop Freyer said. “We thought to gather together and have a prayer service would hopefully be a way to give some consolation during the difficult time.”

Bishop Freyer found out about the crash Sunday night in Rome from a flurry of messages and e-mails on the eve of a week of meetings in the Vatican. Since then, much has been made about Bryant’s Catholic faith, especially his frequent attendance at Mass in Orange County, where he lived with his wife and four children, and the role his faith played in saving his once-troubled marriage during his NBA career.

The 56-year-old Southern California native confirmed media reports that Kobe was seen praying inside the church before the 7 a.m. Mass at their home parish of Our Lady Queen of Angels in Newport Beach the morning of the crash. 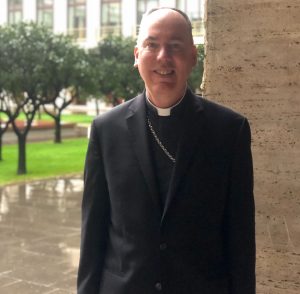 Priests assigned to that parish over the years had shared with Bishop Freyer how they’ve been inspired by Kobe’s humility.

“He would frequently wait until the entrance procession got at least part of the way down the aisle and he would just come in and go into one of the back pews so that he wouldn’t distract the people,” said Bishop Freyer in an interview at the Pontifical North American College in Rome, where the bishops are staying this week. “He wanted people to focus on Christ’s presence, not his presence.”

As Mass was ending, the priests told Bishop Freyer, Bryant would quietly sneak out. Besides Sunday Mass, the 41-year-old star was also known to drop by Our Lady Queen of Angels (also where his younger daughters were baptized) and other nearby parishes to attend daily Mass or simply to pray in church.

Other bishops, including Los Angeles Archbishop José H. Gomez and Auxiliary Bishop Robert Barron, took to social media on Sunday to ask for prayers for the crash victims and their loved ones.

Bishop Joseph Brennan grew up in Los Angeles as a Lakers fan, and despite becoming bishop of Fresno last year after three years as an auxiliary in LA, insist he’s “still a Lakers fan.” He, too, received the sad news Sunday night in Rome.

“He was a great player, and being part of that whole Laker experience, he and Shaquille O’Neal were for me a wonderful combination from a basketball fan’s point of view,” said Bishop Brennan.

Although no longer a bishop of the Archdiocese of Los Angeles, Bishop Brennan joined his brother bishops before the Blessed Sacrament Tuesday morning. "I didn’t sneak in, I was invited!” clarified Bishop Brennan.

From the little he’s been able to follow of the accident’s aftermath, Bishop Brennan said he was especially affected by a video of remarks by Laker legend and Kobe mentor Jerry West, comparing the loss to that of a son.

“Seeing one of my childhood heroes being moved by a later player, that moved me more than anything these last few days,” said Bishop Brennan.

The Fresno bishop said the tragedy has made him reflect on how “everything’s connected to the Eucharist, to the presence of Christ and making him known.

“The Word becomes flesh in us. And the Word was flesh in this young man named Kobe and his beautiful daughter,” the bishop told Angelus News. “So we just continue to pray in thanksgiving for his life, and pray especially for Vanessa, his wife, and the mother of this child.”

Bryant credited his faith for saving his marriage after his wife had initially filed for divorce in 2011 and for helping him move past the events surrounding his 2003 arrest for alleged rape. Bryant admitted a sexual encounter with the female accuser, but denied that he had committed sexual assault.

Bishop Freyer described Bryant’s quiet devotion as “a reminder to all of us that as Pope Francis has said, the Church is not a Church of saints but a Church of sinners that are trying to be saints.”

“He describes the Church as a field hospital for those in need,” said Bishop Freyer, who met Pope Francis in an audience Monday with the rest of the “ad limina” group. “By God’s grace, when Kobe was having his difficulties and challenges, he’d turn back to the Church even more so, and was able to get strength and comfort and grace through advice from some of our [Diocese of Orange] priests, and receiving the sacraments.”

Bishop Freyer believes Bryant deserves credit for having the same extreme determination he showed on the basketball court in “giving everything he could to save his marriage.”

“The practice of the faith wasn’t just to save the marriage,” said Bishop Freyer. “I think it was also a way for him to draw closer to Christ, and hopefully anybody in any state, whether it’s in a state of grace, whether it’s in a state of problems, discouragement, family troubles, sin, that they too would follow his example and turn to the Church and throw themselves at the feet of Christ.”

Editor's note: An earlier version of this story reported that Kobe Bryant attended 7 a.m. Mass at Our Lady Queen of the Angels in Newport Beach the morning of his death. This article has since been corrected to reflect updated information that Bryant stopped by the church to pray before 7 a.m. Mass at the parish on Sunday, Jan. 26, but did not stay for the Mass.