Scaled down RE Congress crowd revels in return to Anaheim

Knowing the right words to use at the right moments is how Anne Kertz Kernion built her inspirational hand-calligraphy greeting card business over the last four decades. At last weekend’s Los Angeles Religious Education Congress (REC), attendees could find plenty of words — and devotional designs — at her booth at the Anaheim Convention Center Exhibit Hall to express the joy of being back together again.

“There is a sense of tenderness and an acknowledgement this has been hard for all of us, and the vibe I feel is deep gratitude, just to be able to see people face-to-face and give each other hugs,” said Kertz Kernion, an REC vendor for more than 25 years who traveled with her husband, Jack, from their home in Wexford, Pennsylvania, just north of Pittsburgh.

Kernion experienced a difficult bout with COVID-19 in March 2020. But with vaccinations and boosters, she felt safe and never hesitated to make the trip to this year’s Congress, held March 18-21.

“Those who are here will look you in the eye and ask ‘How are you doing?’ and they really want to know,” said Kernion, adding she felt a similar experience doing a live workshop Saturday based on her book, “Spiritual Practices of the Brain: Caring for Mind, Body and Soul” (Loyola Press, $14.99).

Of the estimated 5,000 registered participants who attended the Congress mindful of COVID safety protocols still in effect, there was a prayerful purpose to go this route versus signing up for a virtual attendance pass. 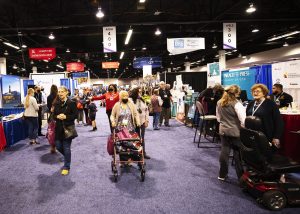 The number of booths and participants in the RE Congress Exhibit Hall was less than previous years due to COVID-19 restrictions. (Victor Alemán)

“I felt called by the Holy Spirit to change up what we are doing, trust in making some radical change, and renovate all our programs, and when I found Congress, I told the pastor we needed to go to California,” said Barbara Serrano, a youth minister and DRE at St. Elizabeth Ann Seton Parish in Pickerington, Ohio.

Serrano said it took “a leap of faith” for her to come to REC for the first time and book plane tickets two months ago for her, pastor Father Leo Connolly, and RCIA director Tina Bowie.

As part of a group of 12 from the St. Thomas More Catholic Newman Center at the University of Arizona in Tucson, Nicole Traicoff was another first-time attendee.

“We were all in,” said Traicoff. “We soon realized being here in person is an awesome opportunity. The experience has been beautiful. Sometimes in the pandemic, it feels so isolated in your parish with little socialization. But this reminds us the Church really is universal and there really is physicality to our faith.”

Jason Sharp, who with his wife, Bridget, have been the adult leaders since 2011 of an ecumenical youth group, “Rooted,” in Kearney, Nebraska, had been to REC eight times before, and participated in the all-virtual Congress last year.

“Doing things virtually is wonderful for information,” said Sharp, “but when it comes to feeling and emotion, that’s what can be lacking. There is so much energy and a common sharing of our faith that comes alive when you are here.” 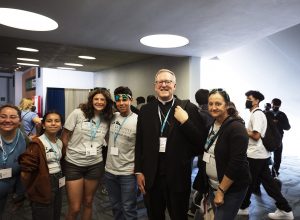 “I wish all the people who wanted to could have come to listen to that,” said Duong, who made a 90-minute drive back and forth between days to attend in person. “Since last year I’ve been trying to get back to see people from all around the world that come here. I feel blessed to be able to come.”

Bishop Barron, whose Word on Fire evangelization ministry reaches millions around the world through video and social media, smiled as he tried to make his way from the convention center arena to the exhibit hall after his talk, but he kept getting stopped by people excited to meet him in person.

He agreed that this year’s REC “might be a little muted from the past.” But Bishop Barron, who has attended the Congress for more than 25 years, said he found renewed energy speaking at Thursday’s Youth Day to about 400 high school students about religion and science.

“This room here to me is a symbol of the Church, because here is everybody — left, right, center,” he said, pointing toward the exhibit hall. “I always get a kick out of that. So yes, I still feel a buzz, even if it’s just at a lower level.”

Arena workshops by Congress favorites such as Bishop Barron, Father Tony Ricard of New Orleans, and Father Greg Boyle of Homeboy Industries may not have filled the 7,000-seat space as in years past. But a reminder of the pandemic reality struck before Father Boyle’s presentation on Saturday afternoon: It was supposed to include Homeboy CEO Thomas Vozzo talking about his new book, “The Homeboy Way: A Radical Approach In Business and Life” (Loyola Press, $26.99). But as it started, Father Boyle announced that Vozzo tested positive for COVID hours before and couldn’t attend.

Participants who signed up for virtual access have only a choice of about 35 recorded workshops different from those in Anaheim, available until May 17. Virtual access also included livestreamed arena events and Masses.

Workshops in both formats included presentations for parish ministry leaders, teachers, and administrators on topics including faith enrichment, mental health, spiritual healing, synodality, effective social media expansion, and how to discuss racism. So were various aspects on the subject of immigration — a main theme of the work of Catholic painter and native Angeleno Lalo Garcia.

“You know what, I just needed to be here,” said Garcia, who has had an REC booth for 12 years but missed the last two. “I know it won’t be huge on the business side, but I’m thrilled to reencounter Congress. It’s been a reunion.” 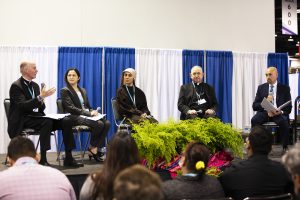 Speakers at a panel discussion on homelessness in LA with Archbishop Gomez on Saturday, March 19. The panel was moderated by Michael Donaldson (far right), senior director of the archdiocesan Office of Life, Justice, and Peace. (Victor Alemán)

One of the featured events was a Saturday morning panel discussion with Archbishop José H. Gomez on the issue of homelessness in Los Angeles. Joining him were Msgr. Gregory Cox, executive director of Catholic Charities LA, Sister Maria Goretti, a sister of the Poor of Jesus Christ, a religious order ministering on Skid Row, and Susana Santana of the Society of St. Vincent de Paul in LA.

Archbishop Gomez thanked his fellow panelists for the work done by their organizations. But he also reminded the audience of the quiet, often unpublicized local outreach work done at the parish level around the archdiocese.

When he was asked about what the Church’s call to action in addressing homelessness should look like, Archbishop Gomez said everything starts with the individuals taking action.

“It is clear to all of us that if we want to go deeper into understanding the social teaching of the Church, we have to see it in each person’s growth,” said Archbishop Gomez, now in the final year of his three-year term as USCCB president. “Sometimes we think of social teaching as just a social action or a political action, but it really is a personal call. We are all called to do things in different ways, to reflect what God says for us to do to improve this situation.”

In his homily at the event’s closing Mass the next day, Archbishop Gomez gave a shout-out to the “beautiful witness” given by Catholics during the COVID pandemic since the last time Congress-goers had seen one another two years ago.

“Thanks to your efforts, and the grace of God, you have helped people keep their faith and grow,” he remarked.

He then showed a wrist bracelet he was given on Thursday’s Youth Day and read aloud the words that spelled out the theme, “Let God Take the Wheel.” 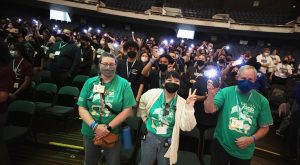 “Sounds good, huh?” he said. “It was beautiful to see [the young people] full of hope. We should have that same excitement and same energy. I hope that each one of us feels that urgency of growing in our personal relationship with Our Lord Jesus Christ.”