What strikes you when first confronted by “Angels Unawares” on the plaza of the Cathedral of Our Lady of the Angels is the weight of the thing. Timothy Schmalz’s bronze sculpture, 20-feet long and 12 feet high, weighs 3.8 tons and looks every ounce of it.

Solid, almost blocky, it appears lacking in subtlety and any discernible method of moving it, so much so that a likely first impression is, “How did that get here?”

But spend a moment, and the dark block quickly reveals itself; softening, splintering into a global collection of people packed aboard a simple raft. Call them immigrants or refugees, they comprise a range of races and nationalities, circumstances, and time periods, their faces reflecting the anxiety and fear that results when one’s humanity has been reduced to the “other.”

And just as suddenly, first impressions give way to realizations that here, Los Angeles, named after angels and reputed to be among the world’s most diverse cities, is the most natural place for “Angels” to land.

Archbishop José H. Gomez told Angelus that it is “fitting” that the North American casting of the sculpture has come to Los Angeles first.

“LA is a home for all peoples, we have men and women of every race, language and nationality living here,” he said. “We are a city of immigrants, certainly. But what many people forget is that we also have a long history as a city of refuge for peoples fleeing violence and instability in their home countries.”

Himself an immigrant to the U.S., the Mexican-born archbishop recalled the local Church’s role in providing a safe haven for Catholics escaping the anticlerical violence of the Mexican Revolution in the 1920s, and its continued efforts to welcome refugees and migrants up to today.

The first iteration of the statue was unveiled Sept. 29, 2019, at St. Peter’s Square in Rome — where it will remain indefinitely — during the 105th World Migrant and Refugee Day. 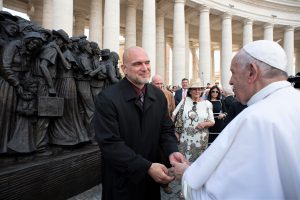 Pope Francis, who participated in the unveiling, said that migrants and refugees are shown “indifference” in the world’s most economically advantaged countries and are today still “often looked down upon and considered the source of all society’s ills.”

It was the pope’s top adviser on immigration issues, Cardinal Michael Czerny, who originally approached fellow Canadian Schmalz about creating a statue.

Cardinal Czerny, who serves as under-secretary of the Migrants and Refugees Section of the Vatican’s Dicastery for Promoting Integral Human Development, told Angelus that the original impetus for the statue came from the “strong urging of Pope Francis … to remember the excluded, neglected, thrown away, the poor and disenfranchised who occupy the periphery of society.”

Besides their friendship and shared nationality, Schmalz was a natural choice given that he is arguably the leading Catholic sculptor working today and because his work often deals with care and comfort of the disenfranchised, including his famous “Homeless Jesus” sculpture.

“[Cardinal Czerny] said ‘I need a sculpture, Tim.’ I told him I already have a lot of sculptures. He said, ‘No, no, something new,” and then he explained about the idea of migration. The moment he said it, I got it. I dropped everything and went back into the studio.”

Schmalz said he didn’t have to think long or go very far for the sculpture’s concept.

“The idea just fell into my lap.”

It actually came from one of his favorite Bible passages, Hebrews 13:2: “Do not neglect to show hospitality to strangers, for thereby some have entertained angels unawares.”

As he had in “Homeless Jesus,” where Christ lies with his back to the viewer, suggesting God is to be found everywhere, including cold and huddled on a bench, Schmalz plants amid “Angels” a pair of angel wings arising from the 140 characters aboard the raft. 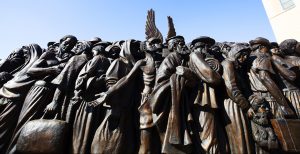 A detail of the “Angels Unawares” sculpture. VICTOR ALEMÁN

Who the wings belong to is unseen and unspoken, but the message is clear: The divine lives among and in us, and to deny that is to deny our very humanity.

“This is a 20-foot weapon to challenge people’s callousness to their brothers, to the strangers,” Schmalz said. “It’s a challenge to all that hatred that comes from defining someone as the other.”

Though those definitions are common today, they have been throughout human history, which is why Schmalz depicted modern-day Syrians fleeing a war-ravaged country, Jews fleeing Nazi Germany, Cherokee on the Trail of Tears, and the Holy Family of Nazareth itself: homeless, tired, and desperate.

Schmalz, who spoke to Angelus over the phone from his home outside of Toronto, admitted to becoming somewhat “obsessed” with the sculpture, working on it nearly around the clock toward its completion, seeing it as much a “visual homily” as a work of art.

“This is part of the process of being a better Christian,” he said. “This is medicine.”

Of course, modern realities tell us that it can be a hard medicine to take for some people, governments, etc. Indeed, the very fact that “Angels Unawares” sits at the Cathedral of Our Lady of the Angels speaks to that.

Though Archbishop Gomez said he doesn’t see the work as “political” in nature, he does see it as a strong “expression of our common humanity and a call to conscience.”

For his part, Cardinal Czerny, though not defining the work as political either, said he would be “unhappy if the sculpture was met with silence and indifference.

“I do hope that the sculpture will trigger discussion, dialogue, and honest reflection on why some people treat others in ways that they themselves would not want to be treated and the very opposite of how their parents or ancestors were treated,” said the 74-year-old Jesuit cardinal. 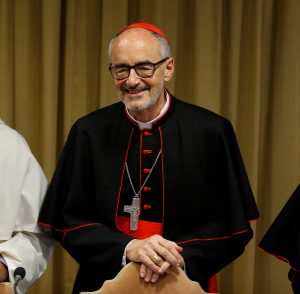 The cardinal knows a thing or two about the subject matter himself. When he was a small child, his parents fled postwar Czechoslovakia in 1948 in search of a better life for their family in Canada. They got to Canada by ship, their journey now forever part of Schmalz’s sculpture.

“Everyone who has changed countries or remembers the migration of parents or grandparents has visceral memories that are both unique to their family and universal to the human experience,” he said.

“So it is poignant to think of your own parents — especially when you realize the risks they took, the fears they overcame and the challenges they struggled to face — were mostly for their children,” said Cardinal Czerny, who was made a cardinal by Pope Francis last year. “For me, it’s very touching to see them depicted as part of the whole human family on the move, united in faith, hope, and love.”

Cardinal Czerny, who calls “Angels Unawares” a “dramatic declaration of Christ’s Gospel, “I was a stranger and you welcomed me” says that its strength is to take up space in the public’s vision and mind.

“A sculpture in a public space has an inherent connection to people ‘on the move,’ ” he said. “Viewers see it precisely because they are in transit.”

Because of that, Archbishop Gomez said that his one disappointment regarding the statue, which he called an “honor” to have at the cathedral, is that more people haven’t been able to see it due to the Cathedral Plaza’s closure to the public during the pandemic.

“Angels Unawares” will remain at the cathedral until arrangements are made for its transport to the Catholic University of America in Washington, D.C. The statue will visit other cities and, there is a possibility that, one day, it will return to Los Angeles.

Archbishop Gomez, for one, looks forward to that day.

“For me, the statue has been a daily reminder throughout these months of pandemic that all humanity is one family, and that we are all called to love and care for one another.”