They had just received the news that their prison ministry, the Partnership for Re-Entry Program (PREP), had been awarded $800,000, the biggest grant in its history. It was an anniversary gift of sorts from the Conrad N. Hilton Foundation, coming as PREP celebrates 20 years of restorative justice in the Archdiocese of Los Angeles.

“We were shocked,” said Kim, the director of PREP. “Now that it’s settled in we feel very grateful and blessed.”

Founded by Sister Mary Sean in 2002, PREP aims to help those with life sentences become productive members of society through in-prison mentoring and correspondence courses that focus on personal growth. Completing the courses not only benefits inmates emotionally, but gives them a better chance of being released early.

“The old thinking was, you go into prison and you come out in a pine box,” said Sister Mary Sean. “People also believed that if you did wrong you belonged in prison and you couldn’t change. Restorative justice believes otherwise.”

The “Beacon of Hope” grant will allow PREP to add staff, new office equipment, and better services. Employees, usually former inmates, will teach more classes on the inside — and on the outside, connect parolees with skills training, jobs, and housing.

PREP estimates it has worked with some 400,000 participants over the years nationwide. As a restorative justice ministry, it has not only the inmates it serves in mind, but the wider ripple effect on families and communities.

“So many of our inmates, once they get on the road to healing, absolutely want to, have to, give to others,” explained Sister Mary Sean. “They know who they are now, they’re good guys.”

Mark Baker didn’t feel like a good guy for a long time. He served 43 years for first degree murder stemming from a fight with another man.

“I lived with that death every day,” said Baker, a PREP alum. “I still do.”

But he credits PREP courses with helping him work toward achieving some peace and, eventually, his release from prison. He now cares for his elderly parents — once upon a time, an unimaginable scenario.

“I used to be self-centered,” admitted Baker. “The modules changed my thought patterns. They made me think inward. I owe Sister Mary Sean my life.”

The Dominican sister marvels out loud about the longevity of her ministry (“How did it really get to 20?”), but keeps plugging away. She writes up to 40 letters a week to inmates and visits them, too, making her a well-known figure inside California correctional institutions. Not only is she unafraid to meet the inmates, but it’s her favorite part of the job.

“It has such a strong influence on that inmate, it says you care enough to come,” said Sister Mary Sean. 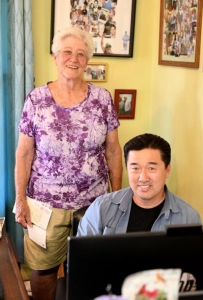 “Everything that comes from that organization comes from the love of God and an appreciation for those of us who are genuinely broken and need someone to believe in us when we can’t believe in ourselves,” said Wedel, his voice breaking. “That’s the reason there’s thousands of ‘lifers’ on the outside now and they’re making a difference in our community.”

Sister Mary Sean’s philosophy of restorative justice, honed through the years, is that inmates need to take accountability for their actions, go through rehabilitation, then get a fresh start. She believes lengthy sentences are outdated and unnecessary.

The California Catholic Conference (CCC) supports PREP’s model, noting it creates a safer society for all of us and calls Sister Mary Sean a leader in the movement.

Not all inmates stick with the program, however. Others may stop and start again, but Sister Mary Sean said there’s usually a moment of transformation. For Wedel, it was when his daughter cut off contact.

“I had nothing left,” recalled Wedel. “My daughter was gone. She was the only person left and she was finally at a point where she was just tired of my behavior and the choices I was making.”

Not only did Wedel take in-prison courses, he eventually helped write one designed for inmates like himself, trying to overcome childhood sexual abuse. Wedel said now that he’s out, he’s interning for a nonprofit, going to school, and reconnecting with his daughter.

After two decades of experience, Sister Mary Sean believes childhood trauma is one of the major contributors to a life of crime, saying whatever “wound goes into the soul” will eventually come out. PREP alum Lawrence Alvitre had plenty of time to reflect on that while serving 26 years for kidnapping for the purpose of robbery.

“I was raised in a gang family, gang culture,” recalled Alvitre. “My father was an alcoholic, he was abusive to my mother. [PREP] allowed me to see how that played a part in why I hung around the people I did, why I made the choices I did … it allowed me to change my life.”

Beyond dealing with childhood trauma, inmates can take courses tackling other issues like anger management or racism. They receive certificates upon completion that can be shared in parole hearings. California statistics show lifers, once on the outside, only have a 3% recidivism rate.

“People who desire to change can,” said an emotional Alvitre. “I lost my parents when I was on the inside. I know life is short. I’m 51 already, so I’m experiencing everything I missed. That was the beauty of me opening up my eyes.” 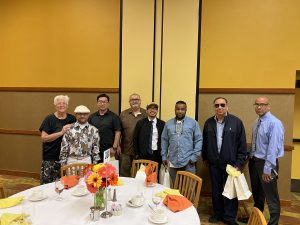 PREP staff at a May 2022 LA Archdiocese employee appreciation luncheon at the Cathedral of Our Lady of the Angels. (PREP)

Inmates like Alvitre are what keep the 81-year-old sister motivated.

“Every morning when I pray I say, ‘Lord, are we ever going to make it to where we want to go on this?’ It takes so long,” shared Sister Mary Sean. “But here it is: When you get into the stories of a person, it’s life-changing and that helps you stay in there.”

Sister went from teaching Catholic high school students to teaching inmates when she needed a new direction. Part of her inspiration: a beloved brother who struggled with addiction and ended up in prison.

“He wanted so badly to change his life,” said Sister Mary Sean. “He would go into a program, come back home, abuse, and then repeat the cycle. I think that was always with me. What is it that we can do to change our lives? My brother was a big influence.”

Kim also does the work for a very personal reason. At age 17, he was charged with homicide and spent the next 32 years behind bars.

“I never thought I would be out here … no lifer was coming out at the time,” said Kim. “I told myself, if I ever get a chance, this is what I was going to do.”

Just one week after his release, Kim started volunteering at the office he now runs. He said he hates to call PREP a “program” and thinks of it as more of a community of friends or “accountability partners” that call one another for support or advice.

In August, hundreds of those friends celebrated Sister Mary Sean and PREP’s anniversary at St. Basil Church in Koreatown. Sister credits her success to having a good team and a good vision. She joked she won’t stop working as long as Kim helps with the computers.

“I don’t think there’s a day that goes by that I don’t ask for help. So I’ll do anything but technology,” she said.

“I just want to keep going until I can’t.”