They are known as chaplains.

Not the priests, deacons, or women religious you’ve seen administering sacraments to the incarcerated. They are the lay men and women who make up the Archdiocese of Los Angeles’ Office of Restorative Justice’s (ORJ) volunteer network spread across Southern California.

Some visit inmates in jails and prisons, while others dedicate their time to ministering to the relatives they’ve left behind. Still others offer what the program calls “help, hope, and healing” to those affected by crime.

Originally known as the Detention Ministry, the Encino-based office has refocused its methods since its founding almost 50 years ago, emphasizing the power of listening, accountability, and transformation through a variety of self-reflection programs.

The ministry played an especially crucial role when the COVID-19 pandemic struck two years ago. Even when LA County jails suspended public visits and quarantined exposed inmates, chaplains were allowed in for individual visits, offering crucial support to a population already suffering the consequences of isolation.

Still, much of the volunteer help dropped off dramatically during the pandemic.

Those who remain dedicated have talked about finding it as a cathartic process to share a common language with those behind bars, forging a communal feeling as they work together to find Christ’s healing strength. Here are some of their stories. 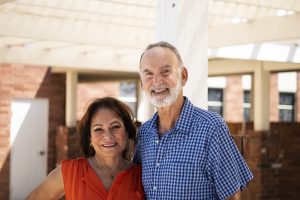 Bob Slater, 72, thrived as a worker’s compensation personal injury attorney in the San Fernando Valley for nearly 50 years, a practice that saw his office handling as many as 500 cases at one point.

His wife, Clorinda, was a cradle Catholic and native of Peru who had come to the U.S. some 40 years ago to study marine biology. After raising their three children, she eventually went back to school to become a legal interpreter. They have been married for 38 years and now have two grandchildren.

Born to Jewish parents in New York but never feeling spiritually connected, Bob decided to go through RCIA some 25 years ago. He credits the Frank Sheed book, “To Know Christ Jesus” for his awakening to the Catholic faith. He became a lector and joined the church’s finance committee, as Clorinda was a Sunday school catechist and extraordinary minister of holy Communion.

Then their faith was put to the test.

In 2017, an Orange County district attorney included Bob in a sweeping insurance fraud indictment. A felony conspiracy charge linked him with nine other lawyers in a scheme to pay for referrals, violating a section of the labor code.

“It knocked my breath out,” said Bob. “It was devastating.”

Bob maintains he was unaware that he was doing anything illegal. Yet in April 2021, Bob was convicted on 22 counts. Nine months later came his sentence hearing. Character witnesses included Father Jarlath Cunnane, then the pastor at Our Lady of Grace Church. The DA asked for a 10-year prison sentence. His appellate attorney asked for probation.

“I was expecting to go to prison, because I knew, as a lawyer, the DA was going to make an example out of me,” said Bob. “But somehow, it was a miracle that the judge only gave me probation.”

With that came 500 hours of community service and six months of home detention. While the case is on appeal, Bob had his license suspended. His lawyer asked the judge if Bob could begin doing community service — offering to work in the archdiocese’ Office of Restorative Justice. The judge agreed.

The Slaters knew about ORJ through their fellow parishioner Gonzalo De Vivero, who made annual parish donation appeals for the ministry.

“I had heard his stories and said to myself: This guy trudges off to prison with bibles? Who does this?” said Bob. “We always feel sorry for those who are poor or homeless, but as far as prisoners — they are the ‘least of us,’ right?”

For now, Bob is not allowed to go into jails for personal visits while his case is pending. So he’s begun helping administer De Vivero’s “Finding A Way In Jail” 24-chapter recidivism module for inmates. He is also helping develop a new program based on Richard Rohr’s book, “Breathing Under Water: Spirituality and Twelve Steps” (Franciscan Media, $19.99), aimed at addressing addictions.

“I was impressed how Bob held onto God during his difficult situation,” said Clorinda. “He never asked: Why is God doing this to me? I was afraid when this happened, it might break his faith. I kept telling him: God knows your heart and we don’t know why this happened. Trust in God.”

Bob realizes every day how close he could have become one of the inmates that other chaplains were coming to visit.

“I still believe in our justice system,” Bob said. “I read their letters — I’m in jail for something I didn’t do. I understand that. I think of that all the time.” 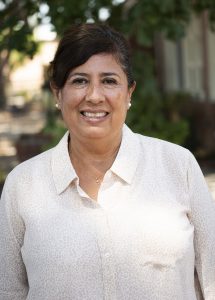 Eve Ortiz’s tiny office space in the lobby area of the Central Regional Detention Facility in Lynwood is stocked with coffee and cookies. The sign above her door, “Chaplain,” is an invitation for anyone in need to enter.

“There are people who might be waiting to visit a loved one, and somehow they’ll come in, and it could be a mother just pouring her heart out that just needs to be heard,” said Ortiz, 64, involved in ORJ for 11 years and a full time employee for the last eight.

The COVID-19 stress was even more acute for Ortiz, who recovered from her second bout with the virus this summer and, two years ago, had a health scare involving a kidney tumor that couldn’t be fully addressed because of the pandemic.

It only seemed to make her dig in even with more resolve.

A longtime parishioner at St. Bernard Church in the Glassell Park area of LA, Ortiz retired from work in a dental office and sought meaningful volunteer work. She has three adult children, including one with special needs, and two grandchildren. A difficult divorce process and caring for an ailing mother during her 50s rerouted her spiritual journey.

A friend involved in restorative justice referred her to ORJ, and she ended up at the jail in Lynwood, which can house up to some 2,000 inmates. She described a “gravitational pull” that drew her to the facility.

“I knew nothing about the jail system,” said Ortiz. “Now I see courage and wisdom, along with sadness and death. The people here teach us a lot of lessons — to be hopeful when even their life is up in the air.”

At the jail, Ortiz’s pool of volunteers dwindled from a few dozen to just her and Parris Wells, a flight attendant who attends Saint Sebastian Church in West LA.

Ortiz is comfortable just using the title “chaplain,” wondering if associating it with being Catholic might lead to misconceptions among the inmates. Yet she recalls a time when a small group of inmates called her over once.

“What faith are you?” one asked.

“We know you’re Catholic, because you see everyone here,” came the response.

“To me, that was the biggest compliment I could receive,” said Ortiz, who works at the facility five days a week. “We are there for whoever needs us.”

It’s a role that Ortiz said has been transformative for her.

“If any of us think that we come here with all the answers, we shouldn’t be here. These women are joyful and sweet, and our presence is the best we can give them. It’s the only way we’ll allow God to work through us.” 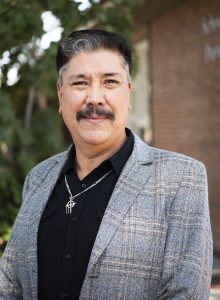 Martin Baeza Martinez, 57, volunteered for 11 years as a chaplain at the Pitchess Detention Center’s North Facility in Castaic before accepting a full-time position three years ago with ORJ.

A parishioner with his wife, Rosa, at St. John Eudes Church in Chatsworth, Martin emigrated from Mexico in 1984 and was navigating a successful high-level manufacturing job. Soon, he careened through alcoholism, drugs, an extramarital affair and getting laid off from his job. He avoided church.

One morning, wallowing in tears, he wandered down the street from his house toward a restaurant just looking for a “cerveza” and “menudo” at 6 a.m. to clear his head.

“My ego was big, and I didn’t care about anyone but me,” he admitted. “But I was down the barrel of my life. I was asking God for help.”

He saw a group of men going into the restaurant. As he approached the door, he missed a step and stumbled, so he was now down on his knees. He looked up to see the men sitting around a table. Gonzalo De Vivero was there and said, “Welcome, you’re one of us.”

Martin had literally stumbled into an Alcoholics Anonymous meeting.

“I looked up and said, Lord, if this is where you are sending me, I surrender,” he said, staying at the meeting.

De Vivero, himself part of AA and living with 10 years sobriety at the time, became Martin’s AA sponsor. Eventually, De Vivero was pointing Martin toward volunteering with the ORJ.

“I remember I said in Spanish, ‘Esta loco!’ ” (“He’s crazy!”) said Martin, who had been trying to avoid jail and once had a DUI at a time he was trying to kill himself and end his pain. Soon, he was at the North County Correctional Facility, facing a ward of some of the toughest prison inmates in the state.

“I’ll tell you, I was scared at first, but when I entered, the volunteers were welcoming,” said Martin. “The more we started talking to the inmates, the more they were sharing with me my life issues. I was thinking, ‘Man, that could be me.’ I thought I could help them. They were helping me. It was a two-way street.”

Martin spoke with gratitude recounting the mended relationships with his wife, Rosa, and his two adult daughters. He has returned as the Spanish music coordinator at his parish. He and Rosa serve on the international board as Spanish-language coordinators for the marriage healing Retrouvaille program. Rosa is also involved in answering letters from inmates through the “Finding the Way in Jail” program.

Martin continues his trips four days a week to the Castaic facility, reviving volunteers from Palmdale, downtown LA, and Moorpark to join him. He enjoys the company of Father Filiberto Cortez (ordained in 2020) from Our Lady of Lourdes Church in Northridge to administer the sacraments there.

Martin also never forgets the day when a jail deputy called out to him, “Hey, chaplain, are you having a service today? These guys are never going to change. They’re the toughest ones here.”

“He was mocking me,” said Martin.

“On the way out, he asked again: ‘Did anyone get saved, chaplain? I’ll bet nobody did.’ ”

“I was thinking about it and I finally said: ‘You know, I think one guy did.’ ”

“Oh yeah, tell me his name. I know everybody in that dorm. I can check and I’ll tell you.”