To hear Juan Gutierrez tell it, his path to the priesthood has been an ongoing contest between him and God. Nothing in the way of fun and games, but rather, this has been a decadeslong competition for his very heart and soul.

“My journey to the priesthood,” he said, “has been one of a constant pull and tug with God.” 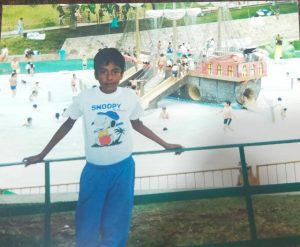 Gutierrez as a child during a family trip to Ixtapan de la Sal, Mexico.

It is one that has had more than its share of twists and turns, starts and stops. Growing up in a small Mexican town about 15 miles outside of Mexico City, his parents split when he was 2 years old. He, his older sisters, and his younger brother were raised by their mother, a devout Catholic who saw that they regularly attended Mass and received the sacraments.

Still, by the time he was in high school he said church “was not relevant to me.”

“You start hearing that religion is the opiate of the masses, and religion is just an invention, and you start to believe it,” he recalled.

This was a dark period for Gutierrez, who began to hang out with a crowd that did not have the best of intentions: “I joined the other side.”

Not long after, his mother was diagnosed with cancer, and Gutierrez moved to Omaha, Nebraska, to reconnect with his father and work to help pay for his mother’s treatments. He lived there for a few years before moving to Los Angeles.

Gutierrez found himself drawn back to the Church through a persistent friend who kept after him to attend a retreat. He decided to go at the last moment, and though he didn’t like everything about the event, the preaching of a priest at the retreat drew him in.

Soon, he was attending daily Mass, helping with prayer groups and retreats, visiting the Blessed Sacrament after work. He was in church so often that many people, clergy, and laypeople, asked him if he was going to become a priest.

Rather than feeling honored by the question, he was annoyed. “I said no. I already had my plan.”

That plan included a career, a wife, a family. The annoyance he felt briefly led him to stop going to church and drop out of those ministries. He stopped visiting the Blessed Sacrament. But soon enough, the change of lifestyle “didn’t sit well with me for too long.

“You stop watering a plant and you see it withering, little by little; that’s how I felt.”

Though drawn back, he wasn’t necessarily happy. “I was very honest with God, sometimes I would tell him off. I would say, ‘I told you my dreams and now you’re crushing them for this priesthood thing. I don’t want it!’

“But, there was a point that it dawned on me, if this is what God wanted for me, I should try it.” 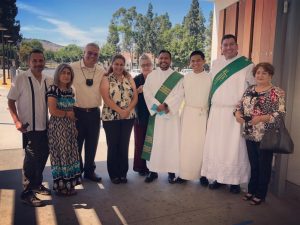 Gutierrez (sixth from left) as a deacon with friends and parishioners of St. John Vianney Church in Hacienda Heights, where he served during his seminary internship year. Also pictured is seminarian Joseph Morel and Deacon Sergio Legarreta, a St. John's Seminary classmate from the Diocese of El Paso.

Now, having finally arrived at the beginning of a vocation many others saw for him before he did, his advice to others is that choosing discernment can be “scary, intimidating, maybe we don’t really want to do it, but there’s a voice telling us that maybe we’re called to something else.

“A sister told me that this is a process, she told me whenever the Lord lights a candle for you, it doesn’t matter how small that little light is, just follow where it takes you. And always keep talking to God about it. Look at me, I went kicking and screaming into discernment, now I’m joyful and happy.”