The task of rebuilding Mission San Gabriel just took an important step forward this Easter: workers have begun the process of replacing the mission church’s roof, which was heavily damaged by a devastating fire in July 2020.

Crews began removing the last parts of the damaged roof and replacing it with a new one on Easter Monday, April 5. The entire process, which includes installing new steel beams and trusses, waterproofing the mission’s adobe walls, and making sure they have not been compromised, is expected to be completed sometime in late July or August.

“There are a lot of intricacies in putting a roof back on a 200 year old building,” said Terri Huerta, Director of Development & Communications for the mission.

That roof will cover the historic church in time for the special Mass marking its 250th jubilee anniversary on September 11, 2021, to be celebrated by Archbishop José H. Gomez. 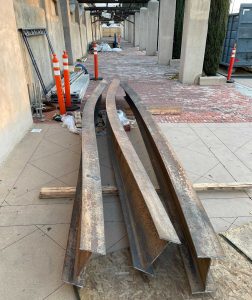 Restorations to the interior of the church will have to wait a bit longer, Huerta said. Plans are still being revised before they are submitted to the City of San Gabriel’s planning department and Historic Preservation and Cultural Resource commission for approval.

It all means that what the jubilee Mass will look like is unclear: it could be celebrated outdoors, or inside the damaged mission church with portable chairs, Huerta said.

Meanwhile, the mission continues to raise money towards its Fire Restoration Fund.